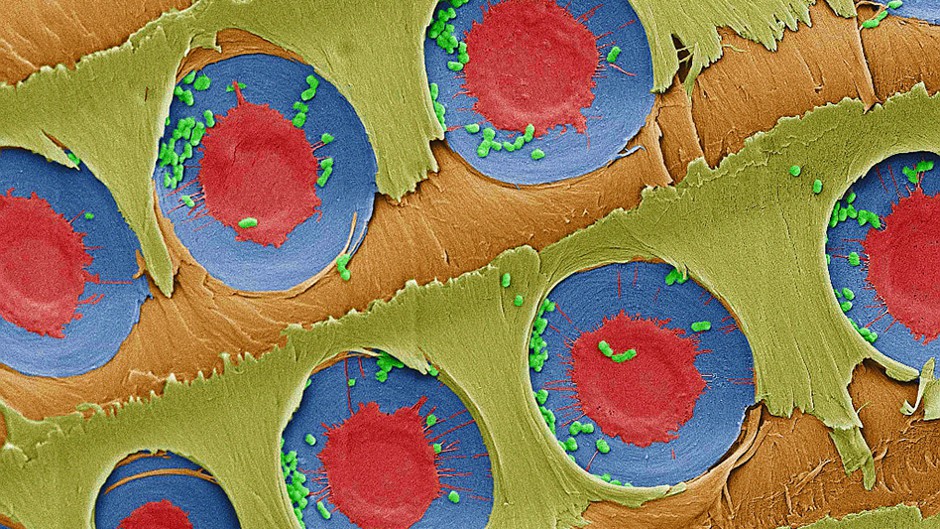 If you’ve run out of drinking water during a lakeside camping trip, there’s a simple solution: Break off a branch from the nearest pine tree, peel away the bark, and slowly pour lake water through the stick. The improvised filter should trap any bacteria, producing fresh, uncontaminated water.

In fact, an MIT team has discovered that this low-tech filtration system can produce up to four litres of drinking water a day — enough to quench the thirst of a typical person.

In a paper published this week in the journal PLoS ONE, the researchers demonstrate that a small piece of sapwood can filter out more than 99 percent of the bacteria E. coli from water. They say the size of the pores in sapwood — which contains xylem tissue evolved to transport sap up the length of a tree — also allows water through while blocking most types of bacteria.

Co-author Rohit Karnik, an associate professor of mechanical engineering at MIT, says sapwood is a promising, low-cost, and efficient material for water filtration, particularly for rural communities where more advanced filtration systems are not readily accessible.

“Today’s filtration membranes have nanoscale pores that are not something you can manufacture in a garage very easily,” Karnik says. “The idea here is that we don’t need to fabricate a membrane, because it’s easily available. You can just take a piece of wood and make a filter out of it.”

The paper’s co-authors include Michael Boutilier and Jongho Lee from MIT, Valerie Chambers from Fletcher-Maynard Academy in Cambridge, Mass., and Varsha Venkatesh from Jericho High School in Jericho, N.Y.

Tapping the flow of sap

There are a number of water-purification technologies on the market today, although many come with drawbacks: Systems that rely on chlorine treatment work well at large scales, but are expensive. Boiling water to remove contaminants requires a great deal of fuel to heat the water. Membrane-based filters, while able to remove microbes, are expensive, require a pump, and can become easily clogged.

Sapwood may offer a low-cost, small-scale alternative. The wood is comprised of xylem, porous tissue that conducts sap from a tree’s roots to its crown through a system of vessels and pores. Each vessel wall is pockmarked with tiny pores called pit membranes, through which sap can essentially hopscotch, flowing from one vessel to another as it feeds structures along a tree’s length. The pores also limit cavitation, a process by which air bubbles can grow and spread in xylem, eventually killing a tree. The xylem’s tiny pores can trap bubbles, preventing them from spreading in the wood.

“Plants have had to figure out how to filter out bubbles but allow easy flow of sap,” Karnik observes. “It’s the same problem with water filtration where we want to filter out microbes but maintain a high flow rate. So it’s a nice coincidence that the problems are similar.”

To study sapwood’s water-filtering potential, the researchers collected branches of white pine and stripped off the outer bark. They cut small sections of sapwood measuring about an inch long and half an inch wide, and mounted each in plastic tubing, sealed with epoxy and secured with clamps.

Before experimenting with contaminated water, the group used water mixed with red ink particles ranging from 70 to 500 nanometers in size. After all the liquid passed through, the researchers sliced the sapwood in half lengthwise, and observed that much of the red dye was contained within the very top layers of the wood, while the filtrate, or filtered water, was clear. This experiment showed that sapwood is naturally able to filter out particles bigger than about 70 nanometers.

However, in another experiment, the team found that sapwood was unable to separate out 20-nanometer particles from water, suggesting that there is a limit to the size of particles coniferous sapwood can filter.

Finally, the team flowed inactivated, E. coli-contaminated water through the wood filter. When they examined the xylem under a fluorescent microscope, they saw that bacteria had accumulated around pit membranes in the first few millimeters of the wood. Counting the bacterial cells in the filtered water, the researchers found that the sapwood was able to filter out more than 99 percent of E. coli from water.

Karnik says sapwood likely can filter most types of bacteria, the smallest of which measure about 200 nanometers. However, the filter probably cannot trap most viruses, which are much smaller in size.

Karnik says his group now plans to evaluate the filtering potential of other types of sapwood. In general, flowering trees have smaller pores than coniferous trees, suggesting that they may be able to filter out even smaller particles. However, vessels in flowering trees tend to be much longer, which may be less practical for designing a compact water filter.

Designers interested in using sapwood as a filtering material will also have to find ways to keep the wood damp, or to dry it while retaining the xylem function. In other experiments with dried sapwood, Karnik found that water either did not flow through well, or flowed through cracks, but did not filter out contaminants.

“There’s huge variation between plants,” Karnik says. “There could be much better plants out there that are suitable for this process. Ideally, a filter would be a thin slice of wood you could use for a few days, then throw it away and replace at almost no cost. It’s orders of magnitude cheaper than the high-end membranes on the market today.”

While the pores in sapwood are too big to filter out salts, Saurya Prakash, an assistant professor of mechanical engineering at Ohio State University, says the design could be useful in parts of the world where people collect surface water, which can be polluted with fine dust and particles of decaying plant and animal matter. Most of this detritus, Prakash says, could easily be filtered out by the group’s design.

“The xylem tissue acts as a natural filter, similar to a manmade membrane,” says Prakash, who was not involved in the research. “The study by the Karnik group shows that use of abundant, naturally occurring materials could pave the way for a new generation of water filters that are potentially low-cost enough to be disposable.”

This research was supported by the James H. Ferry Jr. Fund for Innovation in Research Education.

Reprinted with permission of MIT News.