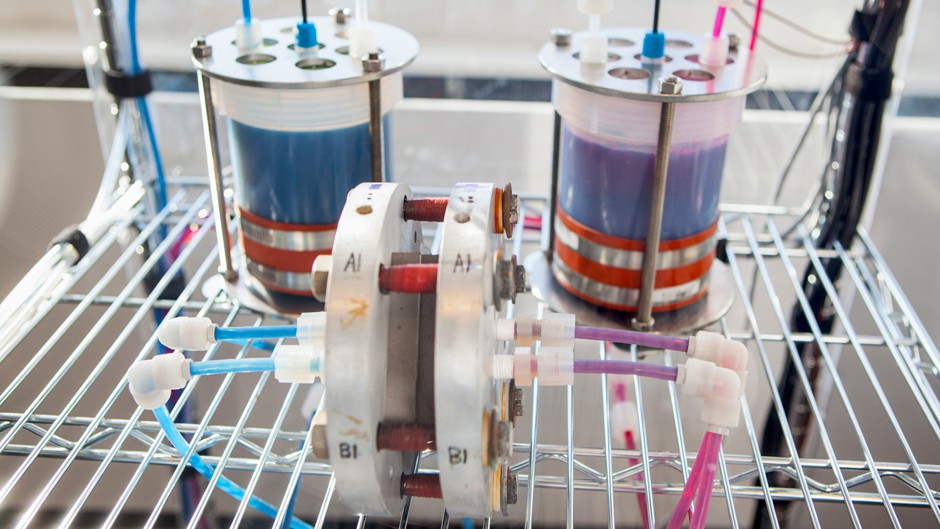 Scientists in the United States think they may be on the track of a new kind of battery technology that could store huge reserves of energy.

One of the great problems of renewable energy generators such as photovoltaic cells and wind turbines is that they can’t respond to demand.

When the sun is out, nobody needs so much heating and lighting, so the electricity goes to waste. In theory, surplus energy could be saved for hours of darkness or when the winds drop, but at a prohibitive cost. But Michael Aziz of Harvard University in Boston and colleagues report in the journal Nature that they have tested what is, quite literally, a solution to the problem.

A common low-cost organic chemical found in crude oil and in living things could, once dissolved in water, be used to fuel a flow battery, into which surplus energy could flow when the winds are high and the sun is shining and everybody has gone surfing, and then deliver stored power when everybody goes home at night and switches on the lights and the cooking stove. 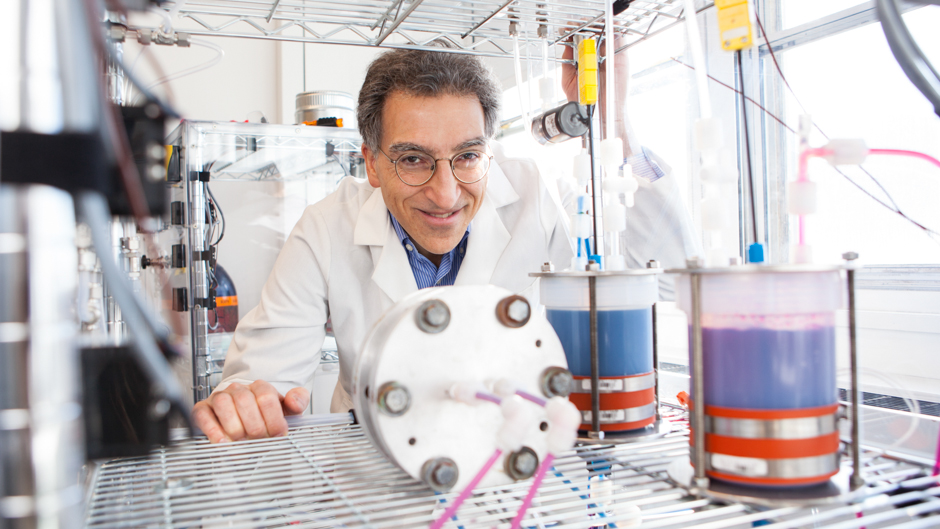 Michael J. Aziz (pictured) and colleagues at Harvard University have developed a metal-free flow battery that relies on the electrochemistry of naturally abundant, small organic molecules to store electricity generated from renewable, intermittent energy sources such as wind and solar. Photo: Eliza Grinnell, Harvard School of Engineering and Applied Sciences.

In a flow battery, two solutions of electro-active compounds are made to flow through electrodes in an electrochemical cell: they react at the electrodes and generate electricity. A membrane separates the two solutions, but lets through charge-carrying ions.

The strength of a flow battery is that the electrochemical conversion hardware and the tanks in which the solutions are stored are kept separately, so that the amount of energy that can be stored is limited only by the size of the tanks.

The downside is that, until now, such systems have depended on expensive electrolytes such as vanadium dissolved in sulphuric acid or even more expensive catalysts such as palladium. Professor Aziz and his colleagues did it with a quinone dissolved in water and very dilute acids, and without a catalyst.

The flow battery under test delivered promising power density and good current efficiency and the whole process is about a thousand times faster than the rival vanadium system.

A quinone is a simple benzene-based compound that comes in many forms and from many sources. The quinone in the Harvard trial was almost identical to one found in the garden crop rhubarb.

The flow battery under test delivered promising power density and good current efficiency. The test kit, however, was only two square centimetres. The whole process is about a thousand times faster than the rival vanadium system, so batteries could be charged and discharged much more swiftly. The next stage is to scale the system up, and keep it running for many thousands of cycles to demonstrate its capabilities.

There is a long way to go and safety considerations remain. The chemistry, too, could be improved. The dream is of a flexible system that could be used in large projects and small.

It could sit in the basement of a home and store the energy collected by solar panels on the roof. Or buried tanks could store the surplus energy from a whole wind farm. The authors say that the use of organic molecules rather than metals holds the promise of massive electrical storage at greatly reduced cost.

“A safe and economical flow battery could play a huge role in our transition from fossil fuels to renewable electricity. I’m excited that we have a good shot at it,” said Harvard researcher Prof. Michael Aziz.

“You could theoretically put this on any node on the grid. If the market price fluctuates enough, you could put a storage device there and buy electricity to store it when the price is low and sell it back when the price is high,” said Aziz.

“The intermittent renewable storage problem is the biggest barrier to getting most of our power from the Sun and the wind. A safe and economical flow battery could play a huge role in our transition from fossil fuels to renewable electricity. I’m excited that we have a good shot at it.”