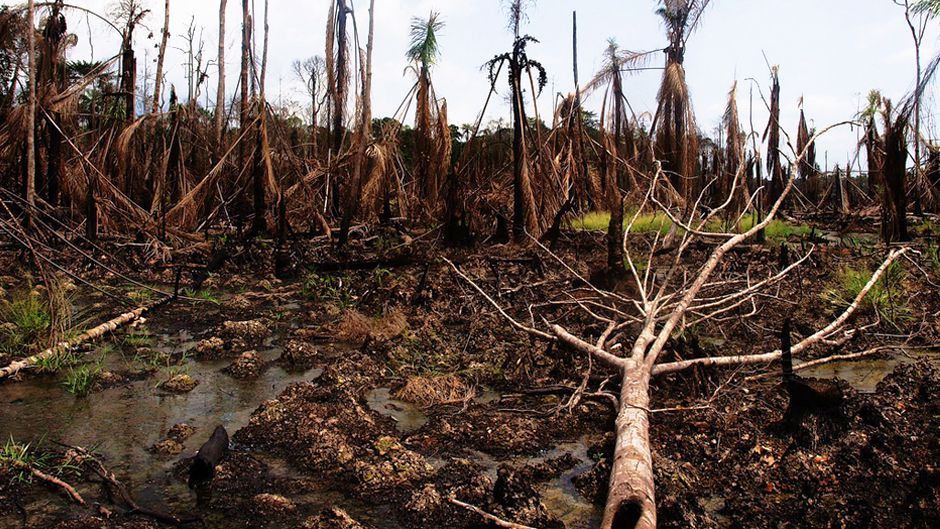 We reached the edge of the oil spill near the Nigerian village of Otuegwe after a long hike through cassava plantations. Ahead of us lay swamp. We waded into the warm tropical water and began swimming, cameras and notebooks held above our heads. We could smell the oil long before we saw it — the stench of garage forecourts and rotting vegetation hanging thickly in the air.

The farther we travelled, the more nauseous it became. Soon we were swimming in pools of light Nigerian crude, the best-quality oil in the world. One of the many hundreds of 40-year-old pipelines that criss-cross the Niger delta had corroded and spewed oil for several months.

Forest and farmland were now covered in a sheen of greasy oil. Drinking wells were polluted and people were distraught. No one knew how much oil had leaked.

“We lost our nets, huts and fishing pots,” said Chief Promise, village leader of Otuegwe and our guide. “This is where we fished and farmed. We have lost our forest. We told Shell of the spill within days, but they did nothing for six months.”

More oil is spilled from the Niger delta’s network of terminals, pipes, pumping stations and oil platforms every year than has been lost in the Gulf of Mexico.

That was the Niger delta a few years ago, where, according to Nigerian academics, writers and environment groups, oil companies have acted with such impunity and recklessness that much of the region has been devastated by leaks.

In fact, more oil is spilled from the delta’s network of terminals, pipes, pumping stations and oil platforms every year than has been lost in the Gulf of Mexico, the site of a major ecological catastrophe caused by oil that has poured from a leak triggered by the explosion that wrecked BP’s Deepwater Horizon rig last month.

That disaster, which claimed the lives of 11 rig workers, has made headlines round the world. By contrast, little information has emerged about the damage inflicted on the Niger delta. Yet the destruction there provides us with a far more accurate picture of the price we have to pay for drilling oil today.

Leak after spill after leak

On 1 May this year a ruptured ExxonMobil pipeline in the state of Akwa Ibom spilled more than a million gallons into the delta over seven days before the leak was stopped. Local people demonstrated against the company but say they were attacked by security guards. Community leaders are now demanding $1 billion in compensation for the illness and loss of livelihood they suffered. Few expect they will succeed. In the meantime, thick balls of tar are being washed up along the coast.

Within days of the Ibeno spill, thousands of barrels of oil were spilled when the nearby Shell Trans Niger pipeline was attacked by rebels. A few days after that, a large oil slick was found floating on Lake Adibawa in Bayelsa state and another in Ogoniland.

“We are faced with incessant oil spills from rusty pipes, some of which are 40 years old,” said Bonny Otavie, a Bayelsa MP.

With 606 oilfields, the Niger delta supplies 40 percent of all the crude the United States imports and is the world capital of oil pollution.

This point was backed by Williams Mkpa, a community leader in Ibeno: “Oil companies do not value our life; they want us to all die. In the past two years, we have experienced 10 oil spills and fishermen can no longer sustain their families. It is not tolerable.”

With 606 oilfields, the Niger delta supplies 40 percent of all the crude the United States imports and is the world capital of oil pollution. Life expectancy in its rural communities, half of which have no access to clean water, has fallen to little more than 40 years over the past two generations. Locals blame the oil that pollutes their land and can scarcely believe the contrast with the steps taken by BP and the US government to try to stop the Gulf oil leak and to protect the Louisiana shoreline from pollution.

“If this Gulf accident had happened in Nigeria, neither the government nor the company would have paid much attention,” said the writer Ben Ikari, a member of the Ogoni people. “This kind of spill happens all the time in the delta.”

“The oil companies just ignore it. The lawmakers do not care and people must live with pollution daily. The situation is now worse than it was 30 years ago. Nothing is changing. When I see the efforts that are being made in the US, I feel a great sense of sadness at the double standards. What they do in the US or in Europe is very different.”

“We see frantic efforts being made to stop the spill in the US,” said Nnimo Bassey, Nigerian head of Friends of the Earth International. “But in Nigeria, oil companies largely ignore their spills, cover them up and destroy people’s livelihood and environments. The Gulf spill can be seen as a metaphor for what is happening daily in the oilfields of Nigeria and other parts of Africa.

“This has gone on for 50 years in Nigeria. People depend completely on the environment for their drinking water and farming and fishing. They are amazed that the president of the US can be making speeches daily, because in Nigeria people there would not hear a whimper,” he said.

It is impossible to know how much oil is spilled in the Niger delta each year because the companies and the government keep that secret. However, two major independent investigations over the past four years suggest that as much is spilled at sea, in the swamps and on land every year as has been lost in the Gulf of Mexico so far.

One report, compiled by WWF UK, the World Conservation Union and representatives from the Nigerian federal government and the Nigerian Conservation Foundation, calculated in 2006 that up to 1.5 million tons of oil — 50 times the pollution unleashed in the Exxon Valdez tanker disaster in Alaska — has been spilled in the delta over the past half century. Last year Amnesty calculated that the equivalent of at least 9 million barrels of oil was spilled and accused the oil companies of a human rights outrage.

Up to 1.5 million tons of oil — 50 times the pollution unleashed in the Exxon Valdez tanker disaster in Alaska — has been spilled in the Niger delta over the past half century.

According to Nigerian federal government figures, there were more than 7,000 spills between 1970 and 2000, and there are 2,000 official major spillages sites, many going back decades, with thousands of smaller ones still waiting to be cleared up. More than 1,000 spill cases have been filed against Shell alone.

Last month Shell admitted to spilling 14,000 tonnes of oil in 2009. The majority, said the company, was lost through two incidents — one in which the company claims that thieves damaged a well-head at its Odidi field and another where militants bombed the Trans Escravos pipeline.

Shell, which works in partnership with the Nigerian government in the delta, says that 98 percent of all its oil spills are caused by vandalism, theft or sabotage by militants and only a minimal amount by deteriorating infrastructure.

“We had 132 spills last year, as against 175 on average. Safety valves were vandalised; one pipe had 300 illegal taps. We found five explosive devices on one. Sometimes communities do not give us access to clean up the pollution because they can make more money from compensation,” said a spokesman.

“We have a full-time oil spill response team. Last year we replaced 197 miles of pipeline and are using every known way to clean up pollution, including microbes. We are committed to cleaning up any spill as fast as possible and for whatever reason they occur.”

These claims are hotly disputed by communities and environmental watchdog groups. They mostly blame the companies’ vast network of rusting pipes and storage tanks, corroding pipelines, semi-derelict pumping stations and old wellheads, as well as tankers and vessels cleaning out tanks.

The scale of the pollution is mind-boggling. The government’s national oil spill detection and response agency (Nosdra) says that between 1976 and 1996 alone, more than 2.4 million barrels contaminated the environment.

“Oil spills and the dumping of oil into waterways has been extensive, often poisoning drinking water and destroying vegetation. These incidents have become common due to the lack of laws and enforcement measures within the existing political regime,” said a spokesman for Nosdra.

“In Nigeria, both companies and government have come to treat an extraordinary level of oil spills as the norm,” says Nnimo Bassey, Nigerian head of Friends of the Earth International.

The sense of outrage is widespread. “There are more than 300 spills, major and minor, a year,” said Bassey. “It happens all the year round. The whole environment is devastated. The latest revelations highlight the massive difference in the response to oil spills. In Nigeria, both companies and government have come to treat an extraordinary level of oil spills as the norm.”

A spokesman for the Stakeholder Democracy Network in Lagos, which works to empower those in communities affected by the oil companies’ activities, said: “The response to the spill in the United States should serve as a stiff reminder as to how far spill management in Nigeria has drifted from standards across the world.”

Other voices of protest point out that the world has overlooked the scale of the environmental impact. Activist Ben Amunwa, of the London-based oil watch group Platform, said: “Deepwater Horizon may have exceed Exxon Valdez, but within a few years in Nigeria offshore spills from four locations dwarfed the scale of the Exxon Valdez disaster many times over. Estimates put spill volumes in the Niger delta among the worst on the planet, but they do not include the crude oil from waste water and gas flares. Companies such as Shell continue to avoid independent monitoring and keep key data secret.”

“Major spills are likely to increase in the coming years as the industry strives to extract oil from increasingly remote and difficult terrains,” says an industry insider.

Worse may be to come. One industry insider, who asked not to be named, said: “Major spills are likely to increase in the coming years as the industry strives to extract oil from increasingly remote and difficult terrains. Future supplies will be offshore, deeper and harder to work. When things go wrong, it will be harder to respond.”

Judith Kimerling, a professor of law and policy at the City University of New York and author of Amazon Crude, a book about oil development in Ecuador, said: “Spills, leaks and deliberate discharges are happening in oilfields all over the world and very few people seem to care.”

There is an overwhelming sense that the big oil companies act as if they are beyond the law. Bassey said: “What we conclude from the Gulf of Mexico pollution incident is that the oil companies are out of control.

“It is clear that BP has been blocking progressive legislation, both in the US and here. In Nigeria, they have been living above the law. They are now clearly a danger to the planet. The dangers of this happening again and again are high. They must be taken to the international court of justice.”