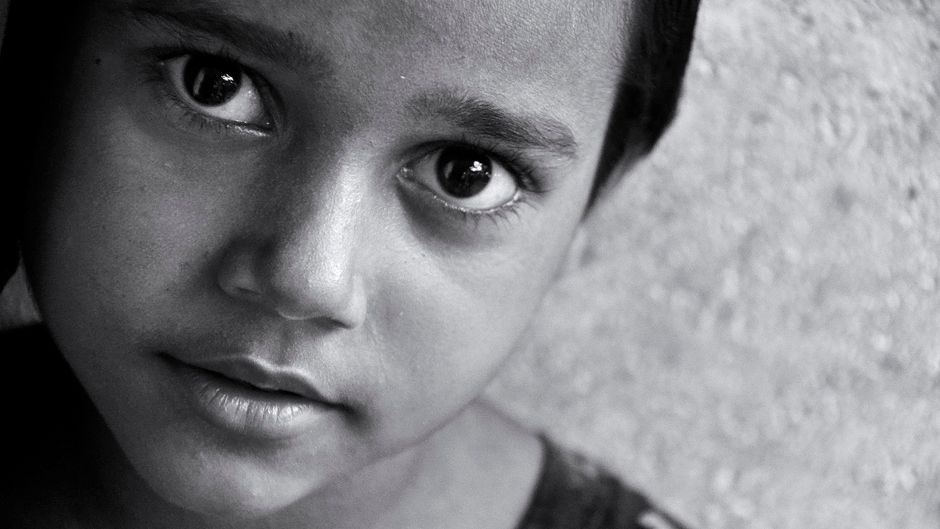 I would like to introduce Bonna, a girl born one November night in 2007 in Mazer Char, a coastal village in Pirojpur District of Barisal Division, Bangladesh. It wasn’t just any November night, and Bonna isn’t just any name. People in southern Bangladesh use ‘bonna’ to describe floods and cyclones. This little girl was given the name because she was born the same night that the devastating Cyclone Sidr hit — a horrifying night that is etched into the memory of many Bangladeshi citizens. Sidr claimed the lives of four people in Mazer Char and up to 10,000 across the nation.

Bonna was lucky. She survived the night that so many others didn’t, thanks to her father’s courage. The family never made it to the cyclone shelter. They left their home too late. Bonna survived because her father climbed up a tree and managed to hold on to some branches while balancing his newborn baby in his arms:

“There was nothing to do but wait and pray. At one point water swept over the tree and I looked down at my empty arms. I was sure that my child had been lost in the disaster,” he tells me.

Miraculously, he found baby Bonna under his t-shirt. It is still not clear to him how she managed to end up there, but she did.

The Third World Conference on Disaster Risk Reduction (WCDRR) was held in Sendai, Japan, in March. As a result, a new 10-year global framework for disaster risk reduction (DRR) and resilience is to replace the Hyogo Framework for Action. The conference was the largest ever held on DRR with an estimated 40,000 people from all over the world participating in conference-related events.

Sendai is far away from many of us and a high-level conference such as WCDRR might not appear relevant to most people — but it is.

Bonna was lucky that night. She survived. But many others were lost to the cyclone. Instead of talking to this energetic little girl, who convinced me to put flowers in my hair, I could have ended up visiting a family who lost their child that night. Through efficient DRR, people will no longer need luck to survive.

Through the aim of improving livelihoods and living conditions through scientific research and community-led action in Bangladesh, the United Nations University Institute for Environment and Human Security (UNU-EHS), the International Centre for Climate Change and Development and Munich Re-Foundation entered a five-year research-to-action partnership and launched the Gibika project at seven sites.

Bonna’s village is one of three coastal Gibika sites where communities are facing cyclone related threats. The deadliest tropical cyclone ever recorded in world history, Cyclone Bhola, struck Bangladesh in 1970. Bhola is said to have killed about 500,000 people in the country, though some state the death toll was closer to 1,000,000.

The government of Bangladesh has worked hard to improve cyclone preparedness in the country’s coastal areas, especially since Cyclone Sidr in 2007. One example is the Cyclone Preparedness Programme undertaken in collaboration with the Bangladesh Red Crescent Society that seeks to minimize loss of lives and property during cyclones through disaster preparedness and increased response capacity — ie, disaster risk reduction and disaster risk management. 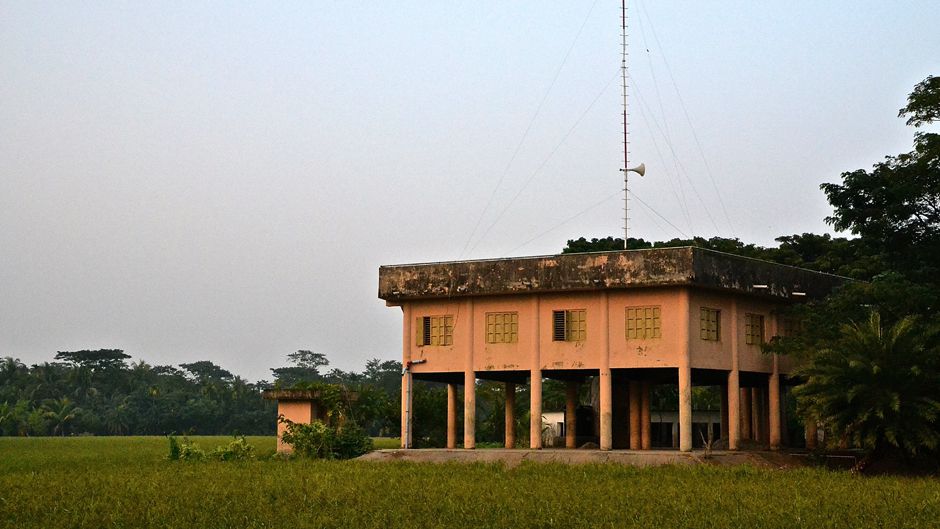 Disaster awareness and preparedness in Bangladesh’s coastal communities have improved remarkably through these initiatives. However, it is important to remember that much of this work — such as handling early warning systems, disaster training in communities, etc. — is carried out by volunteers. This sometimes makes the maintenance and control of responsibilities more difficult.

Recent improvements in communication infrastructure — such as better and more reliable mobile phone networks and higher availability of mobile phones — and immediate disaster response and relief, are other factors that have contributed to reducing the numbers of lives lost during more recent cyclones such as Aila (2009), Nargis (2011) and Mohasen (2013).

However, in 2014, the Gibika research team (including myself) sought to get a better picture of the level of disaster preparedness and awareness and — after careful consultation, repeated site visits and research sessions with the communities in the coastal study sites — we found some serious gaps, limitations and constraints. The existing disaster risks will have to be more effectively managed to reduce these shortfalls.

One example of these gaps became apparent when we visited one of the study sites last year. Currently, there is an established early warning system for cyclones — including audio speakers, sirens, volunteers, and hoisting flags — in all the coastal study sites. However, despite national and international warnings announcing Cyclone HudHud in the Bay of Bengal, no warning flag was raised in the community we were visiting. Very few people living there were even aware of the cyclone’s presence. When we researchers queried local volunteers, we were informed that HudHud was only a signal three (level of alert in the warning system that is based on strength of wind expected to occur within a certain amount of time) and therefore no flag needed to be raised. However, according to the national Cyclone Preparedness Programme, during signal one through three, one flag should be raised. It was also not clear where the early warning tools are kept and who was responsible for the flag hoisting. Several community members expressed a lack of trust in the early warning system and the cyclone shelter.

The general critique against the current early warning system by communities in our coastal study sites was that the warning either does not go out at all or goes out too late:

“I heard about the cyclone at 2 p.m. but when trying to prepare everything it got too late. We tried getting to the cyclone shelter in the evening but we failed. The roads were already blocked by then with broken trees,” reported Abdul Somed Molla, who was interviewed by the Gibika team in Mazer Char.

“The water flooded in so suddenly, people tried to escape to the cyclone shelter but not everybody managed to reach it. Me and my family, my husband and our three children, got caught in the flood and were pulled away. The strong wave took us all the way to the school building where we managed to crawl up on the rooftop,” Alo Rani told researchers in Dalbanga South. 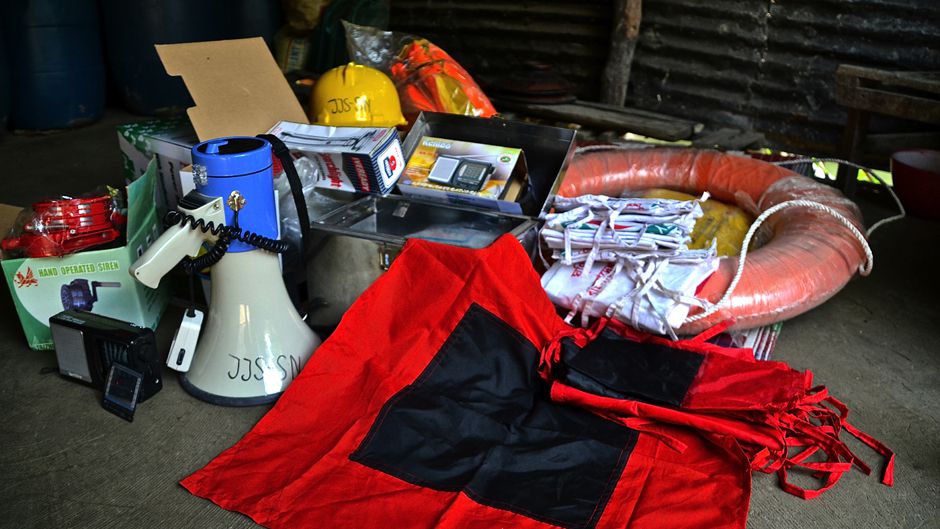 Disaster preparedness tools: warning flags, radios, sirens, audio speaker, life-vest, helmet and uniform provided to one of the study site communities in coastal Bangladesh. One of the problems is that, even if the communities have the tools, they are sometimes not used properly or at all, or are sometimes even sold for some quick money. Photo: © Sonja Ayeb-Karlsson. All rights reserved.

So, while on paper this coastal study site seems well prepared for cyclone threats due to the existing early warning system, it is not. To maximize the effectiveness of a system such as theirs, there is a need to repeatedly evaluate and, together with the local people, determine how to improve the community’s disaster preparedness.

This is why Gibika’s first project action, which will begin this year at the first project site, will focus on eliminating whatever constraints and gaps — be they cultural, social, practical or technological — that are currently decreasing the disaster preparedness level of the community against cyclones. Risk awareness and disaster risk reduction initiatives will need to work together to achieve this.

The world population has almost doubled in the last 45 years, according to the United Nations Office for Disaster Risk Reduction’s 2014 annual report, and the number of people living in cyclone-prone areas has tripled. Economic losses, in particular, continue to threaten people all over the world and human development overall. Through well-functioning disaster risk reduction, people living in these areas will have better opportunities to save their assets, livelihoods and lives. More effective disaster risk reduction will not only improve the resilience of the most vulnerable people living in disaster-prone areas, it will also help increase resilience on a national, international or global level by reducing post-disaster relief expenditure. 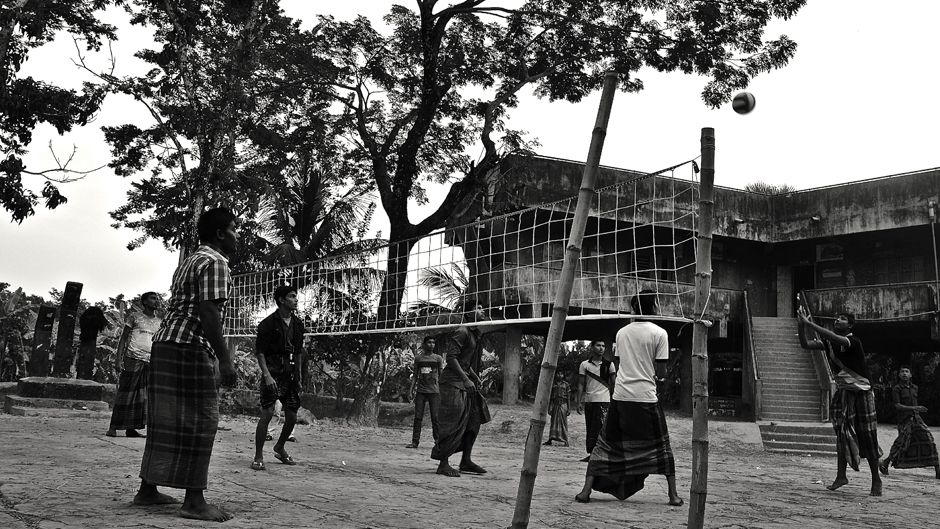 A group of young men playing volleyball in front of the cyclone shelter as the sun goes down in Gabtola, one of the coastal study sites in Bangladesh. Photo: © Sonja Ayeb-Karlsson. All rights reserved.

The WCDRR in Sendai highlighted the value and importance of disaster risk reduction, disaster awareness and preparedness tools like a well-functioning early warning system. The conference brought together people from 187 countries, including 25 heads of state. The Sendai Framework for Disaster Risk Reduction 2015–2030 adopted at the conference is a step towards action and towards making the world a safer place.

The Sendai Framework is about effective preventative action and decreasing climatic disaster risks, limiting losses and damages and, above all, saving lives. It is about Bonna and everyone else living in disaster-prone areas around the globe. It is about making sure that people receive training on what steps to take when a cyclone is approaching — how to best prepare, plan and act in a short amount of time. It is about making sure that when the next ‘Bonna’ is born, somewhere in the world, she will be kept safe in the arms of her father while waiting out the cyclone in a robust shelter.

A shorter version of this article was first previously published by the Dhaka Tribune.

No Need for Luck to Survive: Why We Should Care about Disaster Risk Reduction by Sonja Ayeb-Karlsson is licensed under a Creative Commons Attribution-NonCommercial-ShareAlike 4.0 International License.
Based on a work at The Dhaka Tribune.