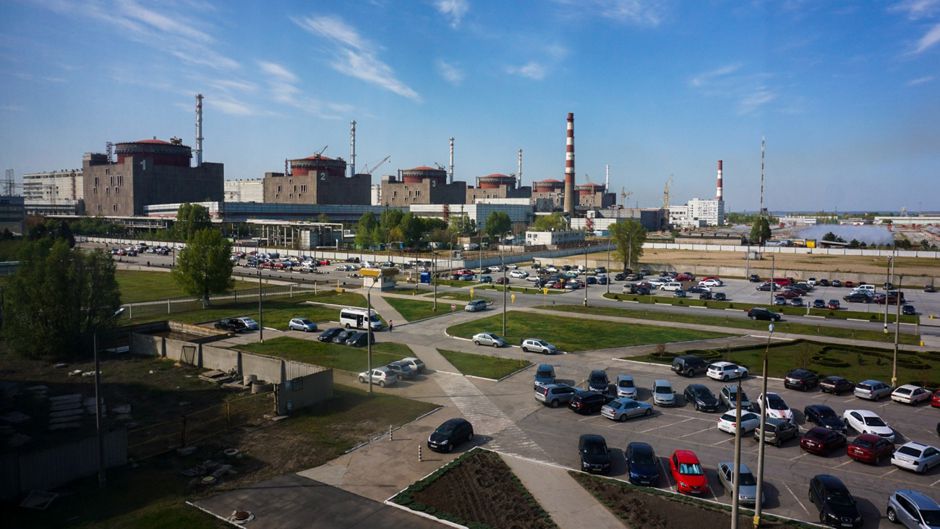 Concerns have been raised by environmentalists and atomic power experts over the way waste is being stored at Europe’s largest nuclear power station, in crisis-ridden Ukraine.

More than 3,000 spent nuclear fuel rods are kept inside metal casks within towering concrete containers in an open-air yard close to a perimeter fence at Zaporizhia, the Guardian discovered on a recent visit to the plant, which is 124 miles (200 km) from the current front line.

“With a war around the corner, it is shocking that the spent fuel rod containers are standing under the open sky, with just a metal gate and some security guards waltzing up and down for protection,” said Patricia Lorenz, a Friends of the Earth nuclear spokeswoman who visited the plant on a fact-finding mission. 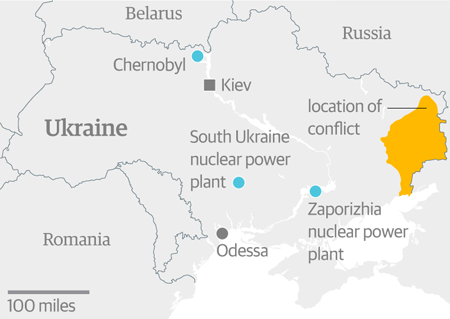 Nuclear power and conflict in Ukraine.

“I have never seen anything like it,” she added. “It is unheard of when, in Germany, interim storage operators have been ordered by the court to terror-proof their casks with roofs and reinforced walls.”

Industry experts said that ideally the waste store would have a secondary containment system such as a roof.

Ukraine’s conflict in Donbass is 124 miles away from the plant, but Gustav Gressel, a fellow at the European Council of Foreign Relations thinks the front line is too far away — for now — to be at risk from fighting.

However, locals still fear for the potential consequences if the conflict was to spread in the plant’s direction. Just three decades ago, an explosion at the Chernobyl nuclear power plant north of Kiev released a radioactive cloud that poisoned vast tracts of land.

“People are scared because the conflict zone is quite near,” Vasiliy Ivanovic, a former policeman turned environmental volunteer told the Guardian. “If Putin wants to connect Russia to the Crimea, the route goes through Mariupol. The Russian troops are already near there, and they have missiles that could hit the power plant.”

Zaporizhia’s storage unit was built to a US design specification that involved rigorous testing for the possibility of a terrorist attack.

The US Sandia Lab tests considered scenarios up to airliner impact, although the results remain classified, Neil Hyatt, a professor of radioactive waste management at Sheffield University, told the Guardian.

However, a dry storage container with a resilient roof and in-house ventilation would offer greater protection from missile bombardment, he said — so long as the structure was designed that way from the start. “You would need to prepare adequate foundations to accommodate the substantive structure required, so I doubt this could be retrofitted at Zaporoizhia with the casks in place,” Hyatt said. “You would need to build a [new] purpose structure and then move the casks to the structure.” 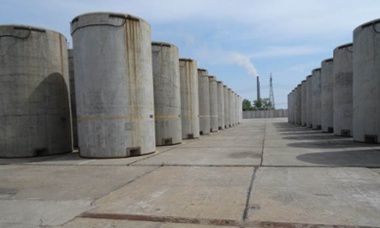 “It is obvious that if you do not have an array of dry cast [interim] stores with secondary containment around it, then that will have a greater risk of release of radioactive material,” he said.

But installing these would “be a very expensive decision,” according to Nikolai Steinberg , a prominent Ukrainian nuclear expert and former energy vice-minister. “I think it is not necessary,” he said.

Sources at the European Bank of Reconstruction and Development (EBRD) told the Guardian that any funding request from Ukraine for such a structure would be seriously considered. The bank has already made €300 million (US$342 million) available for nuclear lifetime extension programmes in Ukraine, before the regulators have even signed off on them.

We know about the weak links in the plant [security]… But I doubt that that these should be disclosed.

A pall was cast over security arrangements at Zaporizhia last May when the plant was the scene of an armed confrontation between security guards and paramilitaries from the ultra-nationalist ‘right sector’, which is allied with neo-Nazi groups. The gunmen reportedly wanted to ‘protect’ the plant from pro-Russian forces, but were stopped by guards at a checkpoint.

“We have several risky nuclear materials [at Zaporizhia],” said Sergei Shegin, the plant’s chief reactor specialist. “As well as the reactors, we have spent nuclear fuel and all possible measures should be taken. As technical specialists, we know about the weak links in the plant [security], and there are some. But I doubt that these should be disclosed.”

Around 770,000 people live in the city of Zaporizhia and safety issues have risen to the fore among local people. Most support the reactor for the jobs it provides, but environmental concerns have grown since a plant shutdown in December amid rumours of a radiation leak, which were denied by the company. 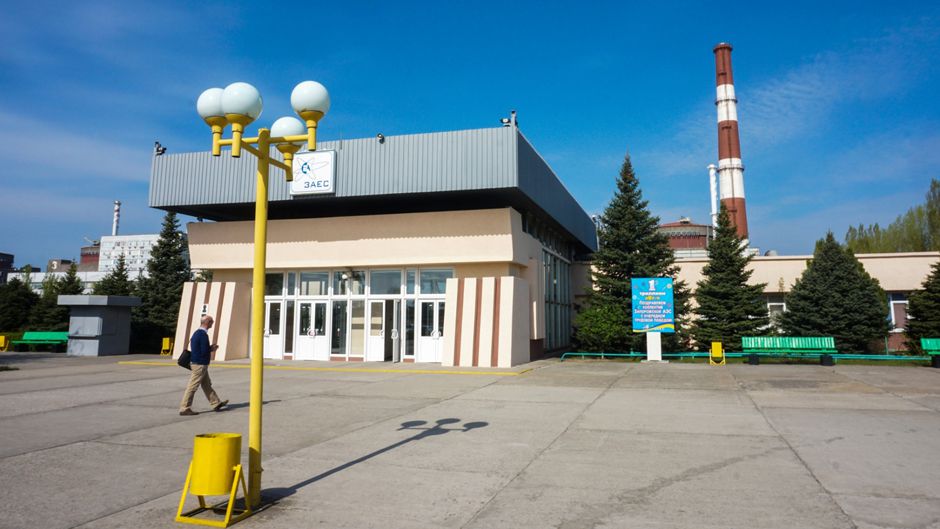 The share of Ukrainian electricity provided by nuclear rose by around 10% in the last year, as conflict in the Donbass region threw Russian gas supplies into doubt.

Coal supplies too had to be tortuously re-routed from Ukraine’s east through Russia, to keep up a pretence they are being sourced internationally and avoid the impression of buying energy direct from the separatist rebels who are fighting Ukrainian soldiers.

As a result, uranium fuel supplies are fast becoming a new east-west battlefield in the post-Soviet great energy game.

Nuclear fuel is the only sphere in which cooperation remains friendly because Ukraine is one of Russia’s biggest clients.

“Nuclear energy is the only possible option for us to replace the generated electricity that we lost [from coal and gas],” a government source told the Guardian. “After the start of open war with Russia, it was understood that all our other strategies in the energy sphere would become impossible.”

Some 60% of Ukraine’s electricity is now produced by 15 ageing reactors — concentrated in four giant plants. Nine of these will reach the end of their design lifetimes in the next five years, and three have already.

Most of Ukraine’s nuclear fleet depends on Russia’s Rosatom to supply its enriched uranium fuel — and to whisk away the resulting radioactive waste for storage.

“Nuclear fuel is the only sphere in which cooperation remains friendly, constructive and successful because Ukraine is one of Russia’s biggest clients,” said Roman Rukomeda, a political analyst. “It is an issue of money.” 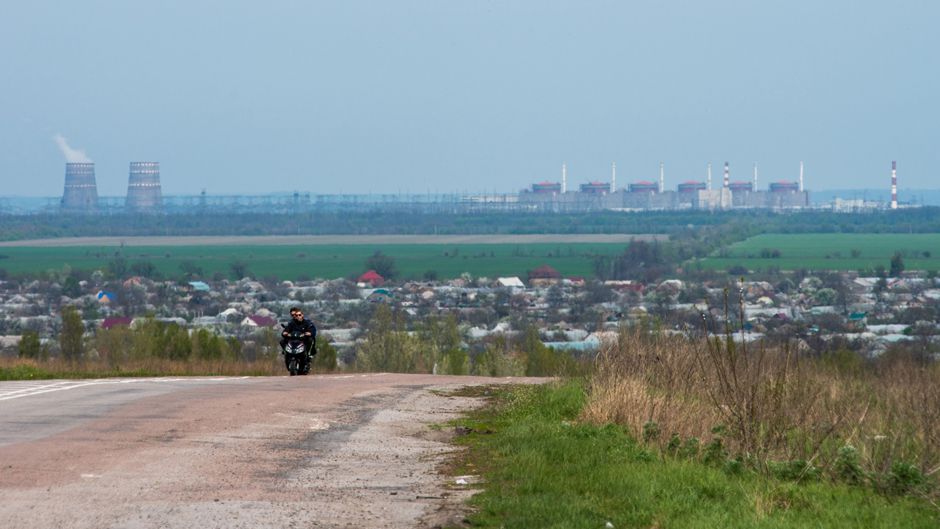 But as fear and loathing in the war-torn region grow, government sources say that in the long term, Ukraine aims to forge a three-way split in nuclear fuel supply contracts between US-company Westinghouse, European companies, such as Areva, and Rosatom. This creates its own safety issues.

One key Ukrainian reactor will be mothballed next month, until concerns about nuclear fuel.

The regulator listed several other safety limitations and deficiencies brought on by the plant’s ageing components, including 33 ‘deviations’ from current nuclear and radiation safety norms.

With war and an energy tilt to the West narrowing energy security options though, the shutdown is expected to be short-lived.

Security sources say that Rosatom may remain Kiev’s biggest single partner but it will definitely lose its monopoly in the years ahead, and Westinghouse’s share of uranium fuel supplies will grow. 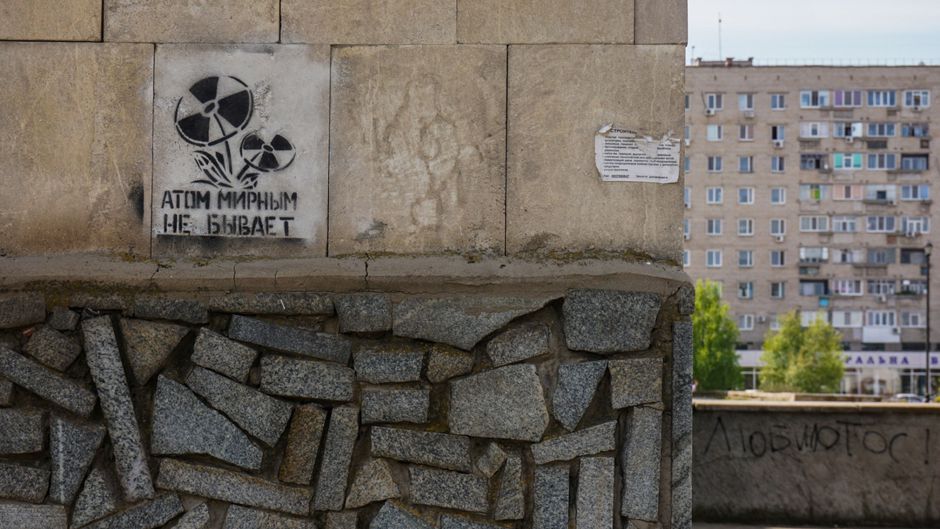 Last December, the US firm signed a memo with Ukraine to “significantly increase fuel deliveries” to Ukrainian plants, though the details are sketchy. A similar deal was signed with the French nuclear company Areva on 24 April.

But fears of Russian retaliation have dogged past plans to shift supply or disposal contracts to the West, and market diversification will be a slow process.

“There is always a threat that it can become a political issue and Russia could stop their contracts,” one source said. “The Americans are proposing that their company Westinghouse substitute for Rosatom, but warning us that it will take one or two years to produce the fuel, so we will need at least one year’s supply in storage.”

The US has provided technology, training and hundreds of millions of dollars to help Ukraine’s push for fuel diversification, according to a US diplomatic cable from 2009, published by Wikileaks.

Westinghouse has also lobbied the Ukrainian government at ministerial level to commit to buying their fuel for at least five reactors. Plant managers say that it will be used in Zaporizhia by 2017.

But local people in the reactor’s shadow say they fear the consequences of a patched up Soviet-era plant cranking up to generate electricity into the 2020s.

“History teaches us that history doesn’t teach us anything,” Ivanovic said. “Another catastrophe could happen again.”