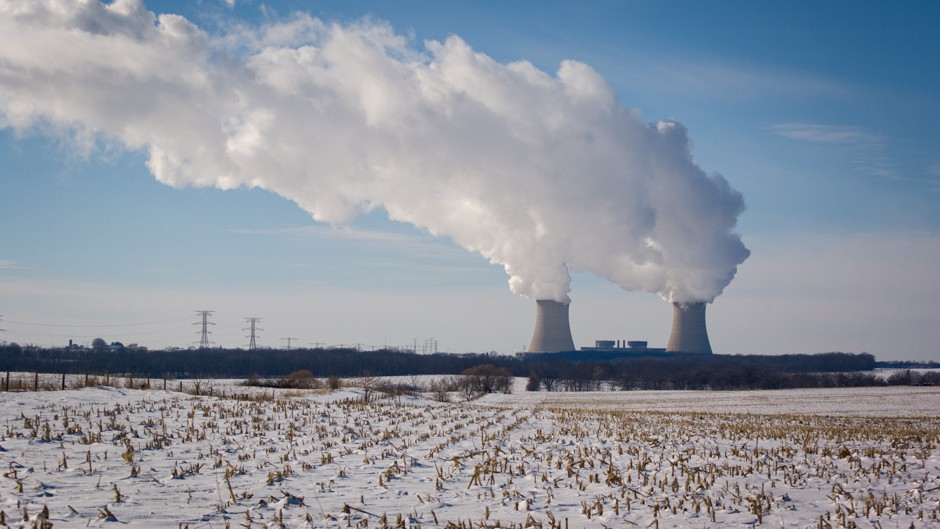 Barack Obama pressed the start button on the first new construction of nuclear reactors in a generation today, announcing US$8.3 billion in loan guarantees for the company building two.

Obama, in a visit to a job training centre in Maryland, said the loan guarantees to the energy giant, Southern Company, would help launch the first wave of construction of new reactors in nearly 30 years as well as advance his energy and climate agenda.

“Even though we have not broken ground on a new nuclear plant in nearly 30 years, nuclear energy remains our largest source of fuel that produces no carbon emissions,” he said. “To meet our growing energy needs and prevent the worst consequences of climate change, we’ll need to increase our supply of nuclear power. It’s that simple.”

The loans would commit the US government to repaying Southern’s loans if the company defaults. The guarantees cover some 70% of the estimated $8.8 billion cost of building the two new reactors at the company’s Vogtle plant, which is east of Atlanta.

White House officials said today’s announcement reinforced Obama’s pledge in his state of the union address last month to expand America’s use of nuclear energy and to open up offshore drilling.

Obama has also asked Congress in his budget request to triple loan guarantees for the nuclear industry to $54 billion from the current $18.5 billion.

Obama’s pledge to the nuclear industry was seen as part of a strategy to win Republican support for a climate and energy bill that has stalled in the Senate. Expanding America’s reliance on nuclear power – which currently supplies about 20% of electricity – is one of the few elements of Obama’s energy and climate agenda to win broad-based support.

A number of Republican senators have demanded Obama help fund the construction of 100 new nuclear plants over the next decade.

Lindsey Graham, the Republican who is working closely with Democrats to draft a compromise cap and trade bill, is also on board with a greater role for nuclear power. His state, South Carolina, gets nearly half of its electricity from nuclear power.

But the subsidies for the nuclear industry have made some senators as well as environmental organisations uneasy. “It’s a heck of a lot of money,” said the Vermont senator, Bernie Sanders, who is an independent. “The construction of new nuclear plants may well be the most expensive way to go.”

The administration is also stuck on a solution for nuclear waste, after shutting down plans to bury the waste in the Yucca Mountain range in Nevada. The administration last month set up a panel to recommend new waste disposal solution.

Obama acknowledged those controversies today, saying: “There will be those who welcome this announcement, and those who strongly disagree with it. The same has been true in other areas of our energy debate, from offshore drilling to putting a price on carbon pollution. But what I want to emphasize is this: even when we have differences, we cannot allow those differences to prevent us from making progress. On an issue which affects our economy, our security, and the future of our planet, we cannot continue to be mired in the same old debates between left and right; between environmentalists and entrepreneurs.”

White House officials said the new reactors could come on line by 2016 or 2017, and would generate 2.2GW. Construction alone would create 3,500 jobs, and the plant itself would create 800 operations jobs.

The loan guarantees announced today are the first of some $18.5bn in funding originally approved by Congress in 2005.

Steven Chu, the energy secretary, said the loans were the first of “at least half a dozen, probably more” loans for new nuclear reactor construction. “We have a lot of projects in the pipeline,” he told reporters, but did not indicate a time for further announcements.

The Southern reactors are to be built with the new Westinghouse AP1000 design, which Chu said was safer and more economical than the older generation of reactors. “If you lose control, it will not melt down,” he said. “Three Mile Island was a partial melt down. It was serious, but on the other hand the containment vessel held.”

Chu also disputed a report from the Congressional Budget Office that put the risk of default on loans to the nuclear industry as high as 50%. “We are looking at ways to increase ways of building these projects on time and on budget,” he said.

This article was originally published on guardian.co.uk on 16 February 2010.