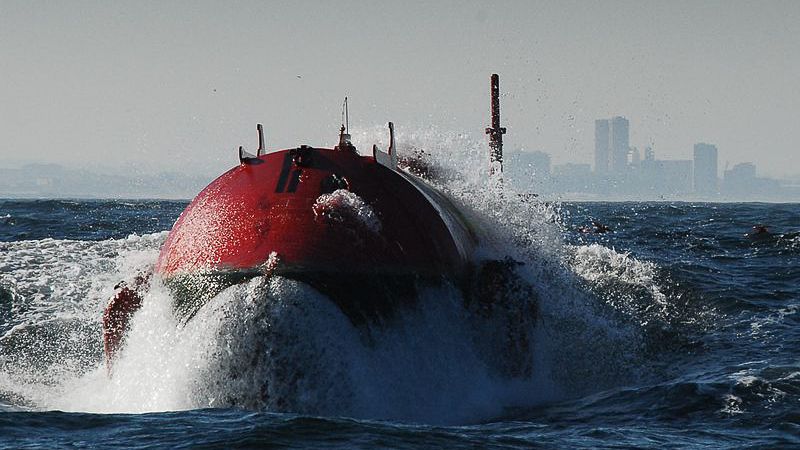 If humanity is going to move away from fossil fuels, then a new range of renewable energy options from the ocean will have to be tapped.

Ocean energy, also known as marine energy, encompasses engineering technologies, such as tidal and wave power, that harness the movements of the ocean to create electricity.

Wave power alone has an estimated global potential of around 1,000-10,000 GW — in the same order of magnitude as the world’s electricity consumption, according to the World Offshore Renewable Energy Report 2002-2007 published by UK Renewables.

Yet despite the proven potential of ocean energy, many societies continue to pursue other unproven carbon fighting technologies, most notably carbon sequestration (otherwise known as carbon capture and storage — CCS).

An up and down history

The first generation of ocean energy technologies were developed over 100 years ago: the initial patents for wave-powered devices were issued in the 19th century. Tidal energy dates back even further if one is to consider waterwheel or paddle wheel techniques.

The first tidal barrages (large dams that capture tidal power) came into operation as early as 1966 in France , and on a smaller scale soon after in China and Canada. However, the high environmental costs associated with these structures have discouraged their wide-scale application.

Despite this, South Korea is currently building the 254 MW Sihwa-ho Lake tidal plant, estimated to be capable of supplying the equivalent of 862,000 barrels of oil per year, which is scheduled to be finished this year.

As ocean energy is beginning to make waves in the green power sector, here are a few examples of promising technologies.

The serpentine power of Pelamis

The Pelamis devices are made of articulated semi-submerged cylindrical sections that are linked by hinged joints. The wave-induced motion of these joints sets off a hydraulic pump-like process, driving generators that produce electricity.

Each of the three machines used at this location are 140 metres long and 3.5 metres in diameter, with a total installed capacity of 2.25MW. However, the energy actually produced by the machines depends on the wave conditions, with the machines typically producing 25-40% of their official maximum output capacity over the course of a year.

All the power produced by the units in the farm is transmitted to the grid using a single seabed cable. According to Pelamis, the three machines can produce enough power to meet the demand of approximately 1,500 households.

Unfortunately, the financial crisis led to the collapse earlier this year of the project’s majority owner, Australian-based infrastructure giant Babcock & Brown and the Aguçadoura plant was put up for sale and plans for its expansion halted.

However it seems nothing can hinder Pelamis’s advancement: a project using second-generation Sea Snake technology is currently underway for German power company E.ON. A single Sea Snake can apparently generate 750 kilowatts and by around 2015, Pelamis hopes each unit will have capacity of 20 megawatts, or enough to power about 30,000 homes.

Going with the tide

Like wind energy, waves are not always predictable. Tidal energy, on the other hand, can be predicted weeks or even years in advance. Though unfortunately, according to the World Offshore Renewable Energy Report 2002-2007, only about 90GW of a total potential of 3,000GW worldwide, is in areas suitable for power generation.

The SeaGen is the first commercial scale tidal turbine in the world to have been connected to the grid. Developed by renewable energy company Marine Current Turbines Ltd, after years of testing of similar prototypes such as the Seaflow, it is situated approximately 400 metres from the shoreline in Strangford Narrows, Northern Ireland.

The structure has four times the maximum output capacity of any other tidal stream project built so far, with a double set of turbines mounted on a monopile, similar to the base of an offshore wind turbine, that supports itself via four pins drilled into the seabed to a depth of about 9 metres.

The monopile also emerges from the water so that the turbines can be easily raised above the surface of the sea for maintenance, which can be carried out by a small boat. SeaGen claims that its rotors, operating for up to 18-20 hours per day, produce energy equivalent to that used by 1,000 homes.

Besides these, many other technologies are in a very advanced stage of development, such as the Wave Dragon, a floating device that transforms the power of the waves that pass over it into energy. Although the device floats on top of the water, its low height ensures that it is practically invisible from the shoreline.

The first prototype connected to the grid has been located at Nissum Bredning in Denmark since 2003. The company was ready to construct and deploy a full-scale commercial demonstration unit in Wales, but due to the financial crisis, it has recently announced a delay so as to seek venture capital.

Wave Dragon says the project would have a capacity of 7MW, which should produce enough green electricity each year to meet the annual demand of 2,000-3,000 homes and offset the release of approximately 10,000 tonnes of CO2.

All of these technologies appear to have no significant environmental impacts, and their potential for electricity production is vast.

In the United Kingdom, for example, the Carbon Trust recently estimated the extent of the economically viable offshore resource at 55 TWh per year, about 14% of current national demand.

One of the main problems that ocean energy faces (and all renewables for that matter) is the difficulty in competing with what are effectively subsidised fossil fuel energy sectors in many countries. In order to progress, it is imperative that the ocean energy industry is given assistance from governments in its early stages of development.

The UK government two weeks ago launched just such a program. Its Marine Renewables Proving Fund allows wave and tidal energy developers to bid for £22 million (over US$35 million) in new grants.

In the same way that it took decades for costs in the offshore wind industry to finally become competitive with fossil fuel generation, research carried out at the United Nations University Institute for Advanced Studies expects ocean energy to become financially viable in the early 2020s.

Some visionaries are starting to see the technology’s potential, as evidenced by a recent announcement that saw investors snapping up stock in Mitsui Engineering & Shipbuilding Co. — the company said it is teaming up with Idemitsu Kosan Co. and Japan Wind Development to jointly build Japan’s first wave power plant on the Pacific coast.

In the meantime, development and construction of wave power facilities should probably be subsidised via feed-in-tariffs, which have been greatly responsible for the rapid development of the renewable industry in several European countries (notably Germany and Spain).

Continued investment in unproven solutions like carbon capture and storage could be considered a cynical way of attempting to continue “business as usual” for a number of years.

Surely it is better for governments to pour their money into a sector that already has working commercial prototypes, than into other technologies like CCS that are not yet viable?

David Leary is a Senior Research Fellow in the Faculty of Law at the University of New South Wales in Sydney, Australia and Visiting Research Fellow at the UNU Institute of Advanced Studies.