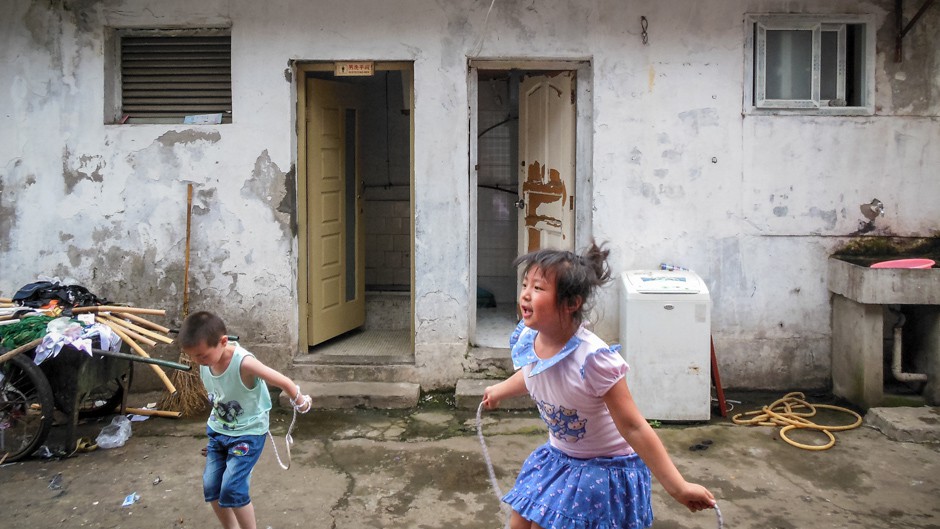 Migrant children play in a Shanghai courtyard with communal toilets in the background. Photo © Deljana Iossifova.

Mrs. Wong lives by herself in a small house in central Shanghai. Her husband passed away not too long ago, and, once married, her children moved away to live in modern high-rise buildings on the urban fringes. Mrs. Wong remembers the times when the family used to come together for Chinese New Year and the Mid-Autumn Festival. These gatherings became increasingly rare with the birth of the grandchildren and as they grew older. Now too old and ill to make the journey to their homes, Mrs. Wong depends on her children and grandchildren to visit.

”You know how it is,” she says; “after two hours or so one will have to go to the toilet. But they’re scared and disgusted. They don’t know how to use a night pot anymore. And I can’t afford a modern toilet. So they don’t come. They call, but they won’t visit.”

Mrs. Wong is not alone. Rapid development and modernization bring about sociospatial differentiation on the grounds of unequal access to sanitation facilities and diverging sanitation practices. The high-speed replacement of old and impoverished urban neighbourhoods with new-built gated communities for an emerging middle class goes hand in hand with the rise in the percentage of urban residents without access to improved sanitation — from 3 percent to 6 percent over just two decades.

China’s technological shift to water closets — despite the high demand on already scarce water — comes hand in hand with a portrayal of them as the most progressive option for human waste disposal. This attitude has resulted in the dismissal of certain everyday practices of sanitation as inappropriate. Those who are not in a position to practice sanitation ‘properly’ are thus, ultimately, excluded from membership in urban society.

Unlike elsewhere — most notably in India and many African countries — sanitation was not considered a taboo in China. As Western observer Carl Crow comments in his 1937 The Chinese are like that: “many who live in modern Shanghai apartments often flush a toilet with a feeling of guilt and regret at the waste of fertilizer which would add to the production of a bean field or bring blooms to a flower garden.”

In fact, China’s traditional agriculture was based around human waste. In cities, ‘night soil’ was collected from households, transported to the closest canal and shipped to the countryside. There, it was mixed with other waste, composted and used as organic fertilizer in the production of food.

‘Modern’ waste management was introduced in China following the Treaty of Nanking (1842), when foreigners began to occupy large sections of the country’s cities. In the late 1960s, most municipal governments abandoned the night soil collection system and installed central waste collection stations in neighbourhoods without access to modern sewage systems. To dispose of their waste, residents now had to carry their night pots to the nearest station. Some installed flush toilets in their homes (often as odd additions to kitchens, larders or bedrooms) — not always connected to sewers. 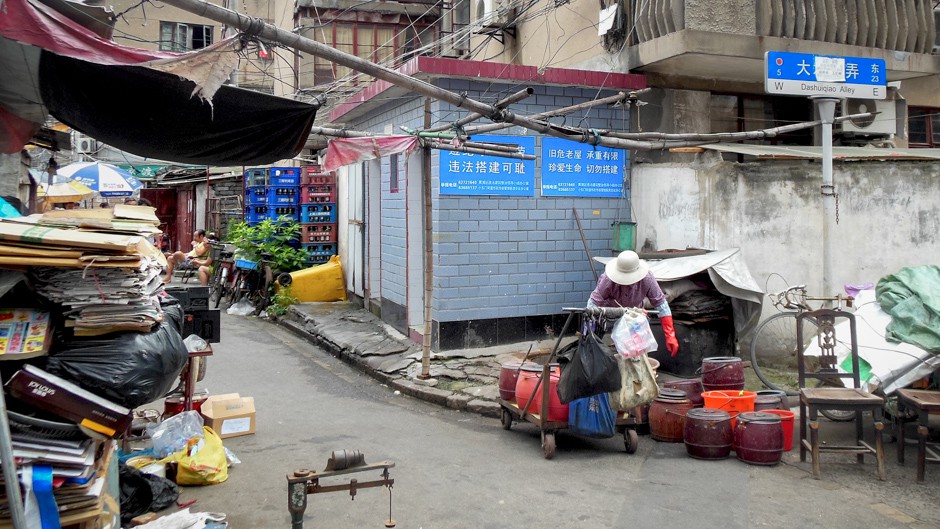 Since then, Shanghai has made enormous progress with regards to the provision of public toilets. The municipality has installed city-wide signage and launched the highly successful Shanghai Toilet Guide. The app locates the closest public facility and even informs users about the availability of toilet paper and Western-style toilets.

But, in the midst of modernization and urban renewal, old neighbourhoods continue to exist. Take Caojiacun, a typical low-income neighbourhood in central Shanghai and home to an older generation of laid-off or retired workers as well as recent rural-to-urban migrants. Long-term residents looked on as their neighbourhood became surrounded by modern high-rise buildings over the past fifteen-or-so years. These residents saw their more industrious neighbours move on to better housing elsewhere and large numbers of rural-to-urban migrants begin to move into the homes they had left behind. Meanwhile they also watched local former factories and warehouses — lacking access to light, air or water — being transformed into overcrowded dormitories for even more migrants.

In the past, residents remember, representatives of the local government made weekly rounds to check the sanitary status of all homes. They made sure the neighbourhood was free of vermin; that garbage was kept appropriately; that night pots were clean. Mrs. Wong, like many of her neighbours, fell into blaming ‘the migrants’ for the environmental decline of her neighbourhood: “They don’t know how to do their ‘business’ properly; they make the neighbourhood dirty because they come from the countryside.”

In downtown Shanghai, Mr. Zhu and his family live in a similar neighbourhood, but theirs had been slated for redevelopment a long time ago and most homes had already been demolished. Mrs. Zhu empties the family’s night pots into a septic tank a couple of hundred metres away. The original waste collection station had been demolished together with the first houses some years ago — ‘probably by mistake’, says Mr. Zhu. To serve the remaining residents and an army of migrant demolition and construction workers, the local government provided a ‘temporary’ solution: grown men and small children, and sometimes women, can now be seen squatting above a hole in a raised concrete slab, surrounded only by three polycarbonate partition walls.

Young Chinese women seem to agree, and so his neighbour’s adult son has not yet been successful in finding a bride: “They run as soon as they’ve first seen the house,” Mr. Zhu says. Just like in India, the lack of a Western-style flush toilet can be a major hindrance with regards to romantic relationships and marriage.

Urbanization and urban renewal processes in China support the monopoly of singular approaches to urban sanitation infrastructure. They are closely linked with the institution of dominant sanitation practices and exclusionary sanitation-related value systems. This type of differentiation carries negative implications for the human experience of the everyday as well as for the long-term trajectories and life-chances of less-advantaged urban residents. From an ecological point of view, the monopolization of single solutions is highly unsustainable in the short term and more susceptible to collapse in the long term. The coexistence of multiple, alternative systems (in sanitation and elsewhere) should therefore be encouraged instead.

Of Poo and People: Sanitation and Differentiation in Urban China by Deljana Iossifova is licensed under a Creative Commons Attribution-NonCommercial-ShareAlike 4.0 International License.