Oil Price Volatility on the Way? 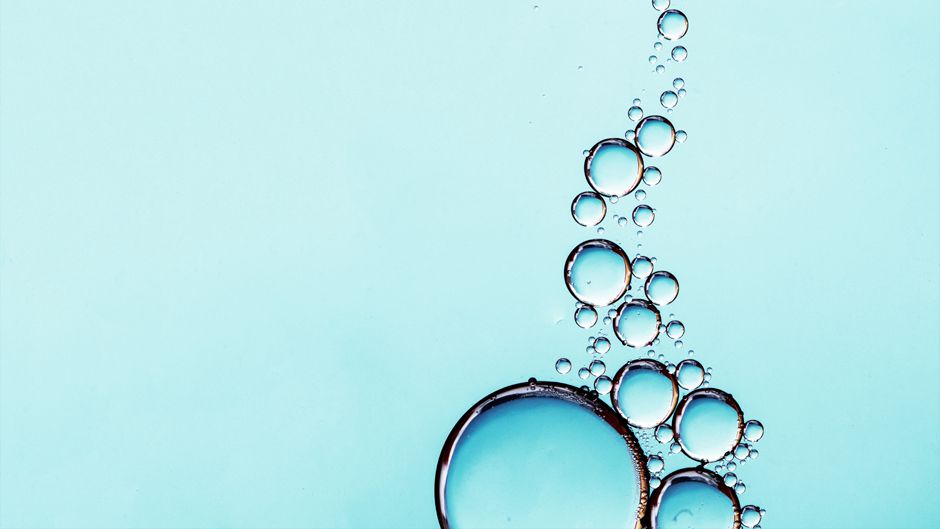 Predictive relationships appear to occur between large, rapid swings in oil price and recessions, stock market crashes and shifts in political polls, as I have previously discussed in articles published in 2010 and 2011. Given the economic disruptions that nearly always happen in the aftermath of oil shocks, it seems important to understand what is behind the timing of transient instabilities in the oil markets.

Last time, I examined whether repetitive patterns could be found in the ebb and flow of oil price changeability (volatility) between 2000 and 2010. To do this, I calculated rolling standard deviations (for explanation, please see Figure 2 in this post)  for a 120-month series of monthly oil prices starting from January 2000. A mathematical tool called Fast Fourier Transform then scanned for repeating patterns in this rolling 10-year sequence.

What I found was that from the mid-2000s, changes in oil price showed evidence of a multi-year oscillation. This pattern was marked by a single dominant frequency that peaked at 2.8 years (~32 months). In other words, during the first decade of the new millennium, volatility in the price of oil appeared to spike every two to three years.

Confirming the potential emergence of a long-term rhythmic pattern, oil price variance spiked again in April 2011, precisely 32 months after the last major round of volatility had topped out in July 2008.

It is coming up on 30 months since the now largely forgotten market turbulence of mid-2011. If oil price volatility is oscillating in a repeating two to three-year cycle, then can we expect to see another wave of instability in oil prices occur in late 2013 or early 2014.

Oil price has lately begun showing signs of increased twitchiness — although the increase in volatility is so far modest. Recently, a crisis triggered by the use of chemical weapons in Syria, is the cause du jour that is being blamed for oil prices ramping up from the mid US$90s to over US$110 per barrel — an explanation that I find doubtful, by the way.

It remains to be seen whether the oscillatory signal described in my 2011 article will continue into the future. However, I have used oil price data that has accumulated since my earlier articles to extend the analysis, presented below.

To improve resolution of changes in oil price volatility over the last 10 or so years, I used a slightly different approach. Instead of scanning through monthly averages, a rolling 3-day standard deviation was calculated using daily prices of West Texas Intermediate (WTI) crude oil from 5 January 2004 to 30 July 2013.

The time series for the daily price of WTI oil (grey line) and its corresponding rolling 3-day standard deviation (orange line) for the period are shown in Figure 1. For those who follow oil prices, the grey line on the plot is all too familiar — distinguished as it is by the scary, vertiginous peak of 2008. 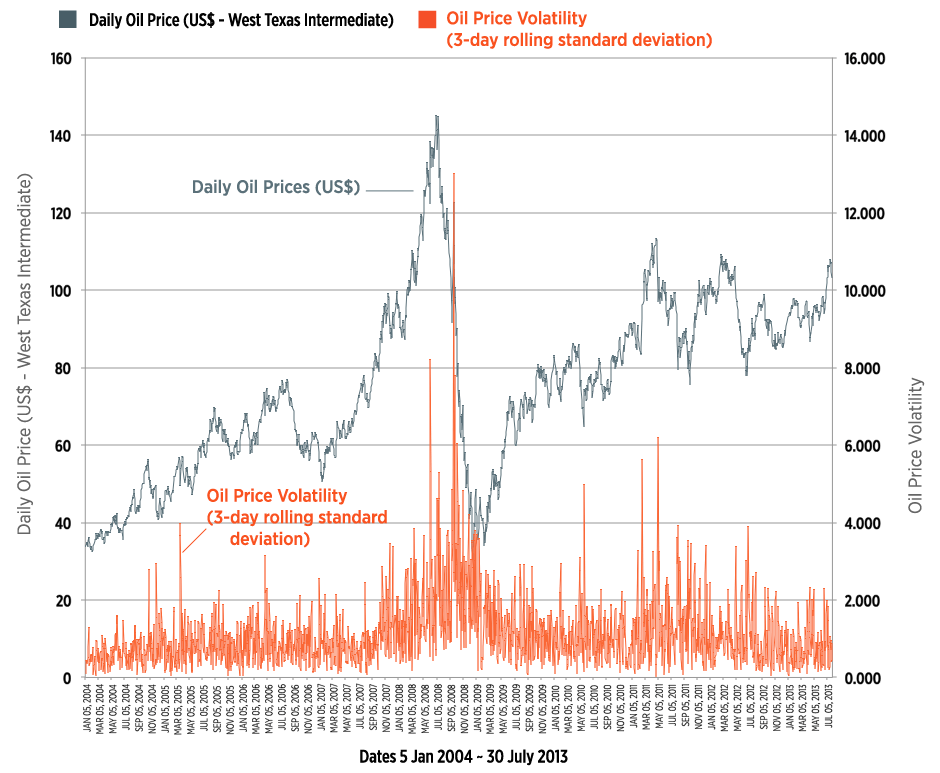 To scan for evidence of repeating signatures in the serrate orange line that traces oil price volatility on the figure, I again used Fast Fourier Transform. The results of this analysis are summarized in Figure 2. From this plot it can be seen that during the last 8 years price volatility has occurred roughly every 2.9 years (33 months). 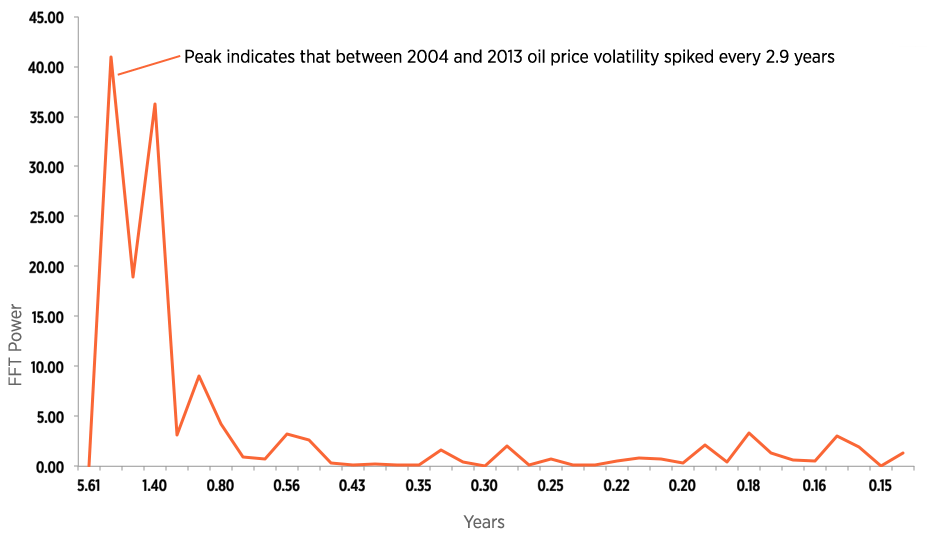 This 2.9-year estimate for the period between spikes, based on daily oil prices, is in agreement with my 2011 estimate, calculated using monthly prices. Thus, the updated analysis accords with the previous finding — namely, that between 2004 and 2013, variance in the price of oil demonstrated a tendency to spike at a frequency of every two to three years.

Readers of my previous articles will know that I suspect that the “rinse and repeat” volatility cycle suggested by my analyses results from a global plateau in oil production being reached in 2005. I favor the hypothesis that an autonomous (e.g., like a heartbeat) oscillation in price volatility has emerged as a result of imbalances between supply and demand at this production plateau. Interestingly, similar oscillatory phenomena have been noted as an emergent property of predator-prey relationships in nature.

A major new development in the hunt for oil is the rise of “fracking” — the hydraulic fracturing extraction technology that has pushed the United States to the forefront as a major producer. It will be interesting to watch and see whether fracking alters the dynamics of oil price changeability in the next few years — perhaps temporarily damping the amplitude of its oscillatory behavior.

If a new spike in price variance does occur in coming months, then it would pay to keep an eye on stocks, given the tendency of the market to react to oil shocks. Also, if a new wave of instability in the oil market sweeps in, then the 2014 congressional elections could have surprises in store. Stay tuned to this frequency.

Oil Price Volatility on the Way? by Tom Therramus is licensed under a Creative Commons Attribution-NonCommercial-ShareAlike 4.0 International License.
Based on a work at http://oil-price.net/en/articles/is-oil-fueling-rise-in-political-partisanship.php.

Tom is a medical school professor and biologist who lives in Charleston, South Carolina. He recently became an American citizen, though is a New Zealander by accent, education and upbringing. Tom is an outsider to the oil industry who brings a refreshing, unbiased scientific perspective on things oil-related.