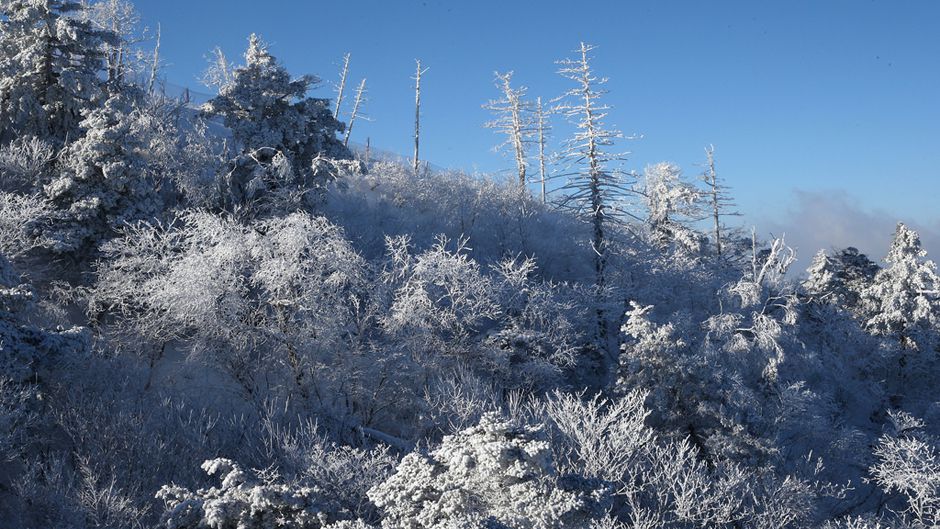 Campaigners in South Korea have accused organisers of the 2018 winter Olympics of destroying a “sacred” forest to make room for a ski slope, and dismissed official assurances that the site will be restored to its original state after the Games.

Environment groups say the recently-completed removal of tens of thousands of trees from the slopes of Mount Gariwang, including ancient and rare species, amounts to an ecological disaster.

The site in the country’s north-east will host several days of Alpine skiing events during the Games in Pyeongchang, which will become only the third place in Asia to host the winter Olympics after Sapporo and Nagano in Japan.

The row between environmentalists and the Olympic organisers centres on a 500-year-old mountain forest that some South Koreans consider sacred due to its connections to the Chosun ruling dynasty.

Green Korea United claims that the removal of tens of thousands of trees will inflict irreparable damage on the area’s delicate ecosystem. An online petition launched last September calling on the International Olympic Committee to ensure that the forest is preserved and the Games “truly live up to ideals of sustainability and environmental protection” failed to halt the trees’ removal.

In response, the Pyeongchang Olympics organising committee says it plans to replace more than 1,000 trees after the Games and restore the natural habitat to its former state — a promise that forestry experts say is practically impossible to keep.

Opponents of the development say chemicals used to treat the soil and create snow will leave the area permanently scarred. In addition, they claim the Games’ organisers, faced with rising costs, will not be able to afford to replant trees, and will instead turn the site into a permanent tourist attraction to enable organisers to recoup some of their investment.

The Gariwang site was selected to host Alpine skiing events because it is the only one of 10 candidate sites that meets International Ski Federation requirements for the event. Alpine skiing courses must, for example, be located at least 800 metres above sea level.

According to the IOC, environmental NGOs proposed six alternatives before Mount Gariwang was chosen. The Korean Forest Service, which selected the site, found that it was the only location that met international course requirements.

But Green Korea United said it had suggested an alternative venue, nearby Yongpyong ski resort, which meets the 750-metre minimum the federation permits for Olympic events under “exceptional circumstances,” the Korea Times reported.

Organisers insist they have already responded to environmental concerns by reducing the tree-clearance area by 30% from 33 hectares to 23 hectares, by combining the men’s and women’s courses for the first time in the history of the winter Games, and by creating a design that avoids major vegetation habitats.

Jihye Lee, a spokesperson for the Pyeongchang organising committee, said an area containing Taxus cuspidata trees had been excluded from the Alpine course, adding that 33 more trees of the same species would be transplanted to preserve them.

Local authorities said last year that altogether, more than 1,200 trees, including firs and Khingan firs, would be transplanted and returned to the Gariwang site.

But a report issued by campaigners in June this year notes that of the 58,000 trees already removed from the site, only 181 will be replanted.

“The organising committee will perhaps argue that they will replant around 300 trees, but all of them apart from those 181 bigger trees belong to small species under two metres in height,” a spokeswoman for Green Korea United told the Guardian.

“It is difficult to imagine that they plan to replant trees that represent the ecological properties of Mount Gariwang. We think their attitude is patronising.”

The mountain was officially designated a national protected forest in 2008 but that designation was lifted in 2013 for this Olympic construction project.

The area earmarked for the Olympics falls under a special category — a forest genetic resources preservation area — stipulated in South Korea’s forest protection act, according to Youn Yeo-chang, professor of ecological economics and forestry policy at Seoul National University.

Of the 2,475 hectares given special status, 78 hectares were removed from the category in 2013 to facilitate Olympic developments.

Youn dismissed claims that some trees, particularly older ones, could be successfully replanted after the Olympics. “Basically, it is not possible to restore the trees to their original habitat because of disturbance to the topsoil,” he told the Guardian.

“The area comprises not only trees, but plants and small animals and other organisms, and the possibility that trees can be replanted there is not very high due to disturbance to soil systems.”

Youn said ancient trees — or those of between 500 and 1,000 years old — were particularly difficult to replant. “For example, yew trees that have been moved to make way for other ski resorts in South Korea have a very long lifespan but they can’t be moved because they’re very unstable,” he said.

“We have already seen how they begin to die out once they have been replanted after being removed to allow for construction of ski resorts.”

Lee told the Guardian that the Pyeongchang organising committee and local authorities were “committed” to the restoration of trees in the area: “Short-term and long-term plans are being put in place to restore the area post-Games.”

As one of very few virgin forests in South Korea, the area is home to protected species such as the flying squirrel and the lynx, as well as endangered species of plants and birds.

Simone Lovera, director of the Global Forest Coalition, said the site also provides a habitat for several types of tree species that are not found outside the Korean peninsula, including Korea’s oldest oak. “It is very sad to see the unnecessary destruction of such a beautiful mountain,” Lovera said.

“South Korea has undergone massive deforestation in the course of the 20th century and this is one of the few sites that had not been deforested.

“The Olympics could easily be held elsewhere by allowing them to ski on shorter slopes. It is clear that the Olympic committee has not taken these ecological sensitivities into account.”

The forest is also of huge historical significance, having been designated a “royal forbidden mountain” during the Chosun dynasty in the early 15th century, with some of the land used to grow ginseng exclusively for the king.

“The ginseng was grown as medicine for the king to ensure his longevity, and even today professional enthusiasts gather ginseng there,” Youn said. “So you can see why the area is of great cultural importance.”