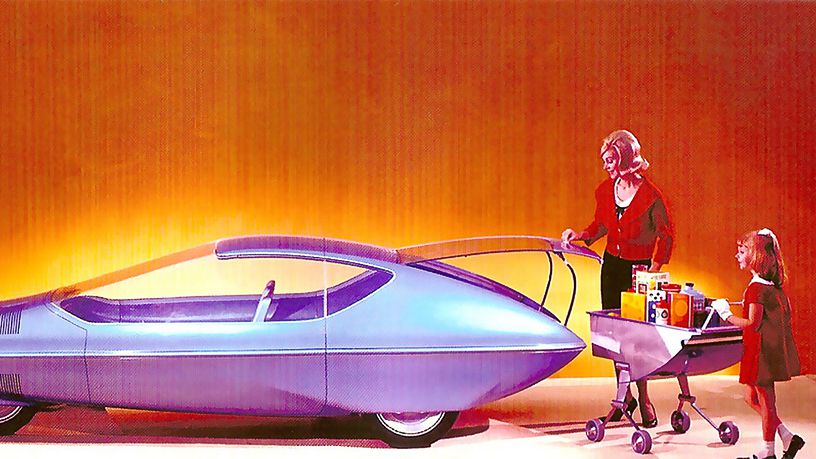 “Transition towns, recycling, alternative power, enduring design; they are just attacking the symptoms. They are merely allowing us to continue living the way we are. They are buying us time. They are not embracing the root cause — our psychology.”

Evolution and psychology explain our urge to consume, argues a new documentary film from the United Kingdom entitled Consumed — Inside the Belly of the Beast. In practical terms that means that the need to acquire status is behind our unsustainable consumption of material items like that new house, new car, new iPad. It’s a strong claim to start off a film with. But then again, it could easily apply to people we know, couldn’t it?

For many people, there are negative connotations to the C-words “consumer” and “consumerism”. But delving a little into the complex of field of evolutionary psychology, this UK documentary draws attention to the idea that as a species we consume as part of “a very natural human urge to experience, and to grow, and to learn, and to play out dreams and aspirations”. In other words, consumption is underpinned by biologically normal tendencies to survive and attract a mate, as others have argued before here on Our World 2.0.

So, at what point did or does consumerism move from being normal to reach the point of “mental illness”, as one of the documentary’s interviewees (who are experts in fields like human ecology, archaeology and sustainable design for instance) puts it?

Perhaps it is helpful here to note Maslow’s hierarchy of needs, even though it is not referred to in the documentary. Under Maslow’s hierarchy (see the pyramid), humans have always strived to meet their basic physiological needs (food, water, sex, sleep) and safety needs (for health, family, property, etc).

The film argues that many of us (although of course by no means all of us) have overcome, particularly in the latter half of the 20th century, the primordial need to protect ourselves from predators of our own and other species, and from disease. 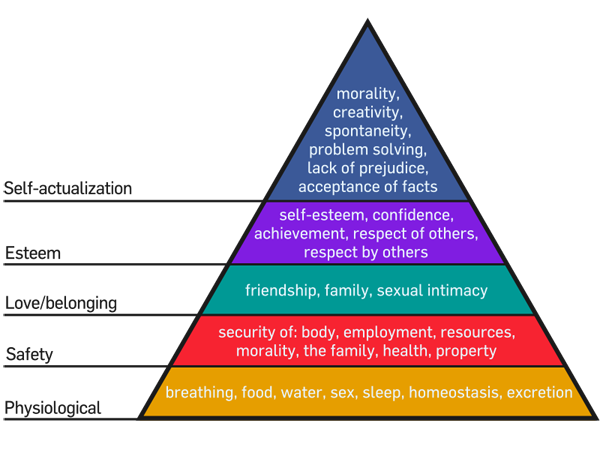 An interpretation of Maslow’s pyramid of needs. By Factoryjoe.

Subsequently, we climb higher up Maslow’s pyramid to emphasise love/belonging and then towards esteem (respect of others and by others). It is at this point that things have sadly gone wrong. The film-makers argue that we now buy our own social status and the esteem of others through the consumer economy. With the basic needs taken care of by industrial society, we now have the time and brain space to be fixated on consuming.

Consumerism has become a form of nourishment for the human mind that craves stimulation and new ideas. But taken to extremes, consumerism morphs into a process that has social and environmental consequences that jeopardise our own long-term interests (dare we say chances of survival — if not of us humans then of many of the planet’s other species and resources).

The process of consuming has also become increasingly complex and stressful — with too many choices and ever more challenging gadgets and gear that we need to fathom. As the film points out, we are working so hard at figuring out how to be good consumers but paradoxically getting so little back in return.

Sadly, in the search for esteem, status or prestige via consumption, we seem to lose sight of the love/belonging segment of Maslow’s pyramid and our chances of moving onto some form of self-actualization appear increasingly remote.

In a world of information overload, perhaps deliberately, Consumed does not bombard the audience with forgettable statistics. But one statistic stands out for its sheer size: by the age of 20, the average Westerner will have been exposed to 1 million commercial messages, or roughly 140 per day. Clearly, corporations, governments and their marketeers are playing their part to ensure we succumb to our evolutionary tendencies. In such a torrent of messages urging you to consume, how can you not be swept along?

The counterargument is that we are not without self-will and that everyone has the potential to resist these temptations to buy, buy, buy.

Consuming a range of films

Consumed is not the first, and won’t be the last documentary analysis of modern society’s runaway consumption, the dynamics behind it and the remedies to move beyond it.

Consumed takes its lead from filmmaker Adam Curtis’s 2002 dissection of how advertisers and corporations take advantage of our evolutionary tendencies to consume in the highly regarded The Century of the Self.  This BBC series explored the growth of mass-consumerism in the Anglophone world through the lens of psychoanalysis. Primarily, it revealed how Sigmund Freud’s nephew Edward Bernays kick-started the practice of “public relations” in the aftermath of World War I, allegedly to manipulate people’s “unconscious desires” to consume.

Another notable anti-consumerism film is No Logo: Brands, Globalization and Resistance (2003), viewable online here. Through the eyes of Canadian activist Naomi Klein who authored the book of the same name, No Logo assessed the anti-globalisation protest movement that has arisen as an antidote to the environmental and social consequences of unfettered capitalism.

But both these critiques are almost a decade old. And arguably, given that the pace of globalisation and consumerism has accelerated since their release, the solidarity movement they were trying to inspire against runaway capitalism is still struggling to assert mainstream appeal.

The advantage of Consumed, in terms of capturing the public’s attention and propelling us towards a better, more just world, is that it dissects the state of modern society in a scientific, cautious and reflective manner. The film’s timing reflects a sense, albeit difficult to measure, that in a post-global financial crisis context “people are questioning the nature of modern life” more than ever. Reflecting this uncertainly, the producers were careful not to simply reinforce the one perspective from different ‘talking heads’ sources to the point of redundancy. Although the overall sentiment of the film trends in a general direction towards questioning the status quo, there is enough nuance to leave us uncertain of how to get where we need to go.

[quote quote=”The film’s timing reflects a sense, albeit difficult to measure, that in a post-global financial crisis context ‘people are questioning the nature of modern life’ more than ever.” type=”text” ]

However, the film is a good complement, rather than a replacement of more polemic activist films like No Logo that outline an alternative blueprint of where humanity should turn. At just 52 minutes long, Consumed did not allow itself time to explore more deeply ideas of how we can evolve as a species, as if the process of consumerism is inevitably something we cannot overcome, at least in the short term. Certainly a discerning viewer would be thinking, “If not ‘Transition towns, recycling, alternative power, enduring design’, then what?” It may not be fair to dismiss such initiatives as mere palliatives, meant to reduce the pain of life today and allow us to continue consuming. They may instead be forms of medicine that are, as yet, too bitter for many to swallow.

A common but avoidable weakness of this and many other English language documentaries is its Anglocentricity with interviewees either being from the UK or North America. It is yet another parade of the all too common Anglo-saxon angst about the end of days and the decline of western civilisation. It would be instructive to understand the perspectives of people in the emerging middle classes of BRICS (Brazil, Russia, India, China and South Africa) and other countries who are most probably engaging consumerism for the first time; not to mention those all over the world aspiring to have what the developed world has, however unsustainable or materialistic.

The jaws of the tiger

While the central premise of Consumed might sound depressing, the film posits that society’s current era of hyper-consumption and detachment from the environment is viewed as an inevitable, but relatively short period of human evolution. One strong message from the film is that we are somehow meant to be here — where we are today — in the consumer society. It is a step on the way to somewhere else, somewhere better. Despite its brevity, the film manages to find hope about the future and its participants appear to believe (or at least wish) that the general population is, or will start to wake-up to our self-destructive reality.

So what about the film’s provocative tagline, ‘Inside the belly of the beast’? Well, if we are going to overcome the amazing self-destructiveness of the consumer/marketing age, the film suggests that there is no better place to do this than from the inside — from within the heart of the consumer society. Reflecting the philosophy that “necessity is the mother/father of invention”, the point when human society is under the most pressure is also the best platform from which to leap beyond the obstacles that seem so insurmountable to us today.

But is this theory a wise thought or just wishful thinking? How many times have you heard people say that their goal was to “change things from the inside”? It can happen. But it is also the case that once inside the beast, you could lose the chance to affect change because you have already been swallowed whole. You have passed through the jaws of the tiger and there is no way back.

Or maybe that doesn’t matter at all because the really honest response to today’s predicament, as one commentator in the film points out, is to acknowledge that we don’t know the answers yet. We are still working it out. But we will get there, eventually.

Overcoming Overconsumption Before It Consumes Us! by Mark Notaras is licensed under a Creative Commons Attribution-NonCommercial-ShareAlike 3.0 Unported License.

Debate: Can Sustainability and Resilience Be Tweeted?