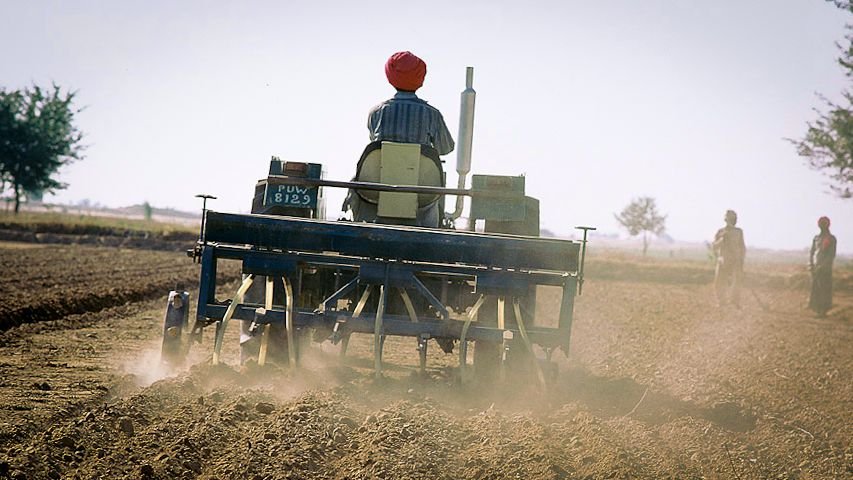 International aid group Oxfam has released a report on hunger around the world that paints a bleak picture of the global food supply and calls for a restructuring of a “broken” food system, which has resulted in almost one billion people going hungry.

On June 1, Oxfam launched its global GROW campaign, which aims to lobby world leaders to change policies around food subsidies, promote sustainable agricultural methods and strengthen regulations on speculation in the international food market. The campaign also aims to make consumers in rich countries aware of the consequences of their habits on the world’s poor and the environment.

“Our goal is to radically change the global food system, the way we use and share and consume in order to make it sustainable,” Marita Wiggerthale, an expert on trade and food security for Oxfam Germany, told Deutsche Welle.

The report offers a sobering picture of current and future world hunger levels, saying nearly 925 million people — one out of seven — now face hunger every day. While food prices have skyrocketed since 2007, the price for staples such as maize will continue to rise, nearly doubling in the next 20 years, which will push the number of hungry people even higher, Oxfam says.

[quote quote=”Peak food production has already been reached because there is increased competition between food, fuel and feed.” author=”Marita Wiggerthale, trade and food expert for Oxfam Germany” type=”text” ]

As global population grows, so will the demand for food, the report adds. By 2050, the demand for food will have increased by 70 percent, even though the ability to increase food production is declining due to flat crop yields and weak harvests caused by a range of factors including environmental problems such as water scarcity and climate change.

“Peak food production has already been reached because there is increased competition between food, fuel and feed,” Wiggerthale said, pointing to biofuel production that diverts 15 percent of the world’s corn to engines and the world’s growing appetite for meat, which pushes farmers to grow food for animal feed at the expense of other food crops.

The global record for tackling hunger is not a particularly good one. In 1995, a UN food summit set a goal to reduce the number of hungry people — then at 820 million — by half. That goal has not been met. A 2008 spike in food prices pushed an additional 100 million people into poverty. The number stabilized somewhat in the second half of that year, but has been rising again.

The United Nations Food and Agriculture Organization (FAO) says food prices are higher than they have been in the last 20 years, surpassing the 2008 price spike that set off food riots in cities around the world.

Most of the world’s hungry are in Asia, and particularly on the Indian subcontinent. However, Africa is the continent where the largest percentage of the population faces hunger. In 2010, some 239 million, or 30 percent, faced hunger there.

“In most African countries, there is not enough long-term investment made in the agricultural sector,” Tobias Reichert, a senior advisor on trade and food at the NGO Germanwatch, told Deutsche Welle.

That is a result, at least partly, of European Union agricultural policy, he said. In the late 1970s and early 1980s, the EU changed from a net importer to a net exporter of food, especially when it came to wheat and other grains as well as animal products such as beef, milk, pork and chicken.

“The EU focused on exporting to developing markets such as Africa, which ended up hurting local producers who couldn’t compete,” he said. “It gave local governments the signal that they didn’t need to invest in their own agricultural sector since the products were cheaper on the world markets.”

But when world food prices started going up, at first slowly, then dramatically, developing countries couldn’t react quickly enough. The long neglect of their own infrastructure meant they could not increase domestic production to offset rising import prices.

The low import prices also had an impact on local food customs as people began to use imported wheat and corn for cooking instead of locally grown crops such as millet and sorghum. That hurt local farmers who saw their markets shrink. Many of those who tried to switch to wheat or corn found that the soil or local climate wasn’t suited to the cultivation of those crops, Reichert said.

Other analysts place some blame for growing hunger on increased speculation in commodities markets, which has led to food price volatility. In the late 1990s and early 2000s, lobbying by investment banks and hedge funds led to weaker regulations on food speculation. Key financial institutions such as Goldman Sachs and Barclays Capital created new investment products to help financial companies make money on food prices. This speculation, betting that food prices would rise, ended up pushing the prices to much higher levels than would have been expected otherwise.

“It has had a devastating impact on people around the world,” Murray Worthy, a policy officer at the World Development Movement in London, told Deutsche Welle. “It’s forcing millions of people into poverty.”

[quote quote=”The World Development Movement and others are calling for new regulations that would bring more transparency to financial markets and limit the amount of food that can be held and traded by banks and investment funds.” type=”text” ]

His group and others are calling for new regulations that would bring more transparency to financial markets and limit the amount of food that can be held and traded by banks and investment funds.

“Food is a fundamental right, it shouldn’t be traded with at the whim of bankers and other financial speculators,” he said.

Oxfam says that the world is actually capable of feeding all of the world’s people, but that short-term thinking, failed government policies and vested interests — including 300 to 500 powerful companies who “benefit from (the current system) and lobby to maintain it” — has exacerbated the problem of hunger, which hits the world’s poorest the hardest and threatens to affect millions of more men, women and children.

Oxfam’s Wiggerthale said she was heartened by the fact that hunger was high on the agenda of this November’s meeting of G20 leaders. There, they will decide whether and how to manage food prices and regulate markets to protect against future price volatility and food crises.

“We want to put pressure on governments so they really act,” she said. “We are in an urgent situation and if we can’t manage to effect change in the next few years, the situation will be much worse.”

This article was originally published by Our World 2.0 partner Deutsche Welle on 2 June 2011.

Kyle James has worked for Deutsche Welle since 1998, first as a editor and program host in the English radio department, then primarily for the online site, DW-WORLD.DE. He also conducts training workshops in Asia and Central Asia for DW-Akademie on radio production and online journalism. A Texas native, he has a master’s degree in journalism from the University of California, Berkeley. In addition to his work for Deutsche Welle, Kyle files regularly for US public radio, France24 television and The Local, an online network delivering news from several European countries in English.