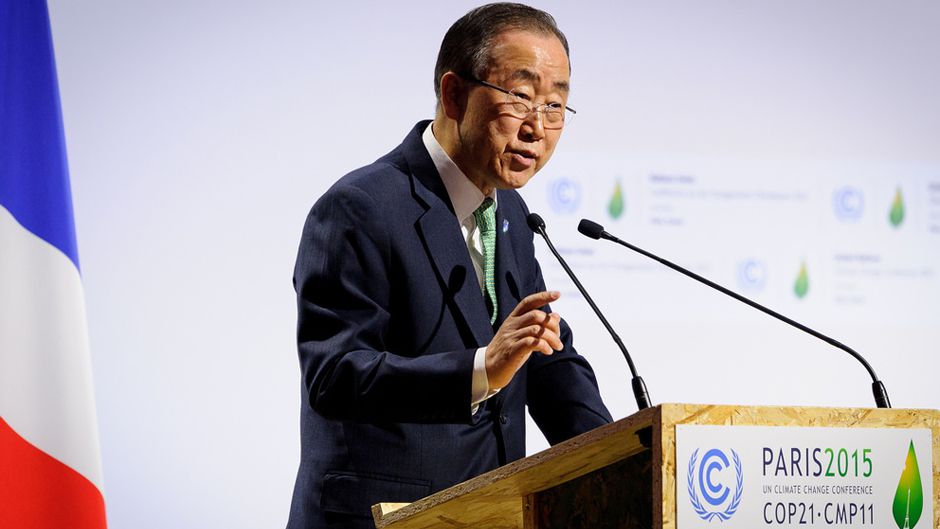 When the climate summit opened in Paris on Monday, the mood was overwhelmingly pessimistic — largely about the current state of the global environment.

Secretary-General Ban Ki-moon set the tone when he warned that the impacts of climate change are growing.

“Three out of four humanitarian disasters are now climate-related. Economic losses have increased by more than half over the past decade. And ecosystems, and food and water supplies are under increasing pressure,” he said.

The hardest hit are the poor and vulnerable — including small farmers, fishing communities and indigenous peoples, he declared.

“A major disaster can wipe out decades of development gains. And as climate impacts increase, we will see greater disruption to economies and international security.”

He singled out the most vulnerable to include Small Island Developing States (SIDS), the Least Developed Countries (LDCs) and most African nations.

US President Barack Obama was equally pessimistic. But still held out a ray of hope.

“Our understanding of the ways human beings disrupt the climate advances by the day. Fourteen of the fifteen warmest years on record have occurred since the year 2000 — and 2015 is on pace to be the warmest year of all. No nation — large or small, wealthy or poor — is immune to what this means.”

He told the two-week long meeting, which continues through December 11, that he saw the effects of climate change firsthand in the northernmost state in the US, namely Alaska, where the sea is already swallowing villages and eroding shorelines; where permafrost thaws and the tundra burns; where glaciers are melting at a pace unprecedented in modern times.

“And it was a preview of one possible future — a glimpse of our children’s fate if the climate keeps changing faster than our efforts to address it. Submerged countries. Abandoned cities. Fields that no longer grow.

Political disruptions that trigger new conflict, and even more floods of desperate peoples seeking the sanctuary of nations not their own.”

The meeting, officially designated the Conference of Parties (COP21), is being attended by more than 150 world leaders, and host of investors, business leaders, and mayors.

They are expected to announce a range of initiatives, and possibly adopt a new international treaty to protect the global environment.

Ban said a new, universal and meaningful climate agreement must contain strong provisions for all countries to strengthen their resilience.

And it must provide sufficient and timely support for those countries that need it. Solutions are available, he said, singling out the Caribbean Catastrophe Risk Insurance Facility and the African Risk Capacity.

“We have broken the old arguments for inaction. We have proved that strong economic growth and a safer environment no longer have to conflict with one another; they can work in concert with one another. And that should give us hope.”

He said one of the enemies at the Pairs conference is cynicism, “the notion we can’t do anything about climate change. Our progress should give us hope during these two weeks — hope that is rooted in collective action.”

Earlier this month in Dubai, after years of delay, the world agreed to work together to cut the super-pollutants known as HFCs. That’s progress, he said.

Already, prior to Paris, more than 180 countries representing nearly 95 percent of global emissions have put forward their own climate targets. That is progress, Obama added.

Addressing the summit, the Director-General of the Food and Agriculture Organisation (FAO) José Graziano Da Silva appealed to world leaders to show courage and resilience by opting for changes that promote a safer, fairer and more inclusive world.

Climate change “affects all of us, but especially the poorest and hungry people,” Graziano da Silva said, underscoring how smallholders and family farmers are “in the front line”.

The most vulnerable must be helped to adapt to climate change, he added, stressing that in relation to the agricultural sectors, this requires environmentally sound initiatives that must go hand-in-hand with mitigating climate change impacts.

Droughts, floods, storms and other disasters triggered by climate change have risen in frequency and severity over the last three decades.

A recent FAO study shows that in developing countries, some 25 percent of the negative economic impact of these disasters is borne by the crop, livestock, fisheries and forestry sectors alone.

He said the damage to rising seas and increasing typhoons is the present and it’s tearing apart the lives of some of the poorest and most vulnerable people on the planet.

“Obama and other leaders should be commended for shining a spotlight on the plight of the world’s poorest.”

Singh also said leaders have now thrown themselves a gauntlet to address the current and devastating impact of climate change over the next two weeks.

The same rich countries speaking up for the world’s most vulnerable now urgently need to match their words with action – and what they have put on the table so far is not anywhere near their fair share of that action.

He said countries must agree to keep warming to below 1.5 degrees, provide adequate money to help poor countries adapt, and include clear and unequivocal lines on tackling the current and future loss and damage in the agreement.”

The writer can be contacted at thalifdeen@aol.com

COP15 to COP21 – Crucial Changes in the Climate Mitigation Landscape