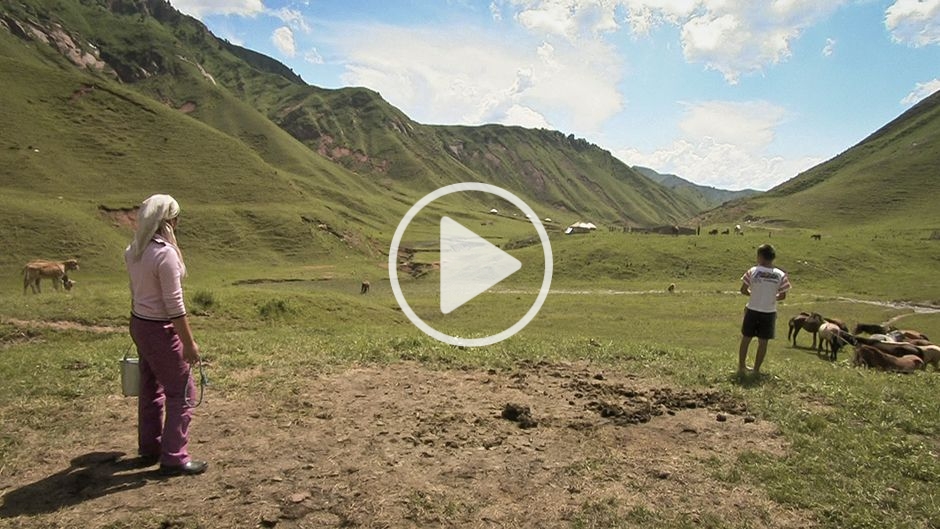 In the past, the Kyrgyz people were nomads. With herds of yaks, sheep and goats, they moved from pasture to pasture in the vast mountain ranges of Kyrgyzstan throughout the year. They lived in yurts — traditional homes made of a wooden frame covered with wool felt that were quick to assemble — and they relied on the region’s natural resources for their livelihoods and energy supply.

The arrival of the Russians in the late 19th century brought a lifestyle change and the Nomads became a settled people, though many aspects of their nomadic culture persist today and are strong elements in the Kyrgyz identity.

During the Soviet era, roads, telephone lines and electrification were set up, along with institutions of a modern state in line with the socialist ideology. Large hydro power stations were constructed in the mountains of Central Asia, and coal was imported from neighbouring Uzbekistan to fuel the centrally planned economy. For many years, the people in mountain villages were employed for agricultural work and livestock breeding by large state farms. Families were allowed to keep only a few heads of private livestock.

But with the collapse of the Soviet economy many families were thrown into much tougher circumstances and poverty. The collective farms, the farmland and the livestock were privatized. Employment in the former system had constituted the only source of livelihood and income for the people, who now had to cope on their own with failing infrastructure and state institutions as well as rising unemployment.

Today, a typical family in Josholu, a village in the Alai mountains in the South of Kyrgyzstan, owns sheep and goats and sometimes some cows and horses. In addition, they grow potatoes and vegetables, mainly for their own consumption, and make hay to feed the animals. During the summer, from about June to September, at least part of the family leads the animals to the jailoo, the remote summer pasture, where they live in their yurt.

The pastureland stretches from the area just around the village to remote pastures stretching up to 60 km away. In principle, the pasture resources are vast and sufficient for the amount of livestock in the village, although reliable numbers are difficult to obtain. The quality of the pastures varies a lot; the amount of livestock that can be sustained while preserving the productivity of the land is not universal but depends strongly on the climatic conditions and the altitude.

During a large part of the year however, most animals these days graze on nearby slopes and many of the most remote pastures are underused.

“The people mainly take their animals to graze in the pastures close to the village,” explains Orunbek Kolanov, dean of the biology faculty at Osh University, in the video brief featured at the top of this article. “That is why the degradation can mostly be seen in nearby pastures.”

One reason is that more distant areas are hard to reach, because roads and bridges — if they exist at all — are often in a bad state and prone to landslides and other hazards. In addition, every family must care not just for their animals, but for their potato and hay fields as well. These duties, including school attendance of the children, are the reasons that most families stay in the summer pasture only for about three months.

As a result, the pastures near the village are overused, and clear signs of overgrazing — such as loss of vegetation, soil compaction and erosion — are visible, as seen in the video.

Another problem is that, within the last twenty years, the area covered by forests and shrub-lands has shrunk considerably. After the fall of Soviet Union, the coal deliveries stopped and people resorted to cutting forests and shrubs around the village as fuel to supplement the traditional burning of dried manure for cooking and heating. This clearing of trees and shrubs, combined with the overgrazing and livestock-trampling, have lead to erosion, land degradation and an increased number of landslides.

This unfortunate mixture means a high loss of productive potential of the mountain ecosystems that directly affect local livelihoods and well-being. Furthermore, it is contributing to loss of biological diversity and release of carbon stored in local vegetation and soils which affect the global environment.

To address the problems of land degradation, a sustainable land management system needs to be put in place that takes into account the particularities of the ecosystem and its climatic conditions, as well as the needs and preferences of the local people. The underlying challenge in the mountain region is to tackle the widespread poverty, otherwise sustainable land use technologies would remain unaffordable for a majority of the population. An integrated approach needs to ensure a sustainable livelihood base for the inhabitants of the region and to preserve the unique mountain ecosystems and its productive and protective functions.

The underlying challenge is to tackle the widespread poverty, otherwise sustainable land use technologies remain unaffordable for a majority of the population.

Diverse sustainable land management strategies are being employed by local NGOs, state institutions and donor agencies. An example of a project addressing the interlinked problems of poverty and land degradation in the Pamir-Alai region is the trans-boundary initiative of the governments of Kyrgyzstan and Tajikistan (PALM), coordinated by the United Nations University at the regional level. The PALM project is supported by the Global Environment Facility and a network of national and international partners who are working on introducing sustainable land management in the region across governance levels.

To address the problems illustrated above, a more elaborate system of pasture rotation is extremely important. That would allow the animals to graze on remote pastures for longer periods of the year and could contribute to remediating land degradation due to overgrazing close to the villages while at the same time increasing the quality of the livestock.

In combination to pasture management, work is needed to restore the degraded land. Most urgent is the recovery and re-establishment of shrubby vegetation and forests. This, of course, has long-term positive effects both on the sustainable supply with fuel wood, on regeneration of biodiversity and wildlife, as well as on carbon sequestration in the region.

As part of the PALM project, targeted communities in the Alai mountains in Kyrgyzstan and in the Pamir mountains in Tajikistan are developing their own land use plans and implementing specific micro-projects incorporating sustainable land management.

Beyond the local level, the strategic and policy environment for sustainable land management on the regional and national scale are being supported. In parallel, research and advisory agencies are using targeted approaches to working with local communities — such as introducing improved fodder cropping and improved goat husbandry — as well as assessing global price trends and demand for wool, berries and other mountain products.

The problems connected to land degradation and poverty faced by the people of the mountain regions of Kyrgyzstan and Tajikistan are complex and all-encompassing, and so must be the solutions.

The three aspects of sustainability — economy, society and ecology — need to be integrated while accommodating the various needs of the ecosystems and the people relying on them. The challenge is not only huge, but also urgent — and nothing less than the livelihood of the region depends on it.

Pastures for the Future in Kyrgyzstan by Darya Hirsch is licensed under a Creative Commons Attribution-NonCommercial-ShareAlike 3.0 Unported License.

Darya Hirsch is an Associate Academic Officer for the PALM project at the United Nations University Institute for Environment and Human Security. She holds a PhD in agricultural science and a Masters in agricultural economics, both from the University of Bonn in Germany. She has worked as a scientific employee and coordinator of international collaboration at the Tashkent Irrigation Engineering School and as a post-doctoral researcher in the NeWater project at the Institute for Environmental Systems Research, University of Osnabrück, Germany.

Dr Fabrice Renaud has been with the UNU Institute for Environment and Human Security (UNU-EHS) since 2004 where he has been the Head of the Environmental Vulnerability and Ecosystem Services Section since 2007. From August 2009 to May 2011, he served as Director ad interim of UNU-EHS. He comes from a background in agronomy with an emphasis on environmental pollution by agrochemicals, in particular pesticides. Prior to joining UNU-EHS, Dr Renaud worked at international organisations and academic institutions in Namibia, Thailand, the US, and the UK.

Heidi Förster is an Associate Academic Officer in the Environmental Vulnerability and Energy Security Section of UNU-EHS. She is doing research on energy security with a particular focus on bioenergy: biofuels and food security on the one hand side, and traditional biomass and its relation to land management in developing countries on the other hand side. She is a physicist by education.

Nevelina holds a Master’s degree in International Development with a focus on environmental economics from the International University of Japan. She facilitates the implementation of the Innovative Land Use and Management Sub-Programme at the UNU. In particular, she is closely involved in the implementation of a GEF/UNEP Project on Sustainable Land Management in the Pamir-Alai Mountains in Central Asia (PALM), as well as in the initiation and development of other initiatives on innovative and sustainable resource use and management situated at the science-policy interface.