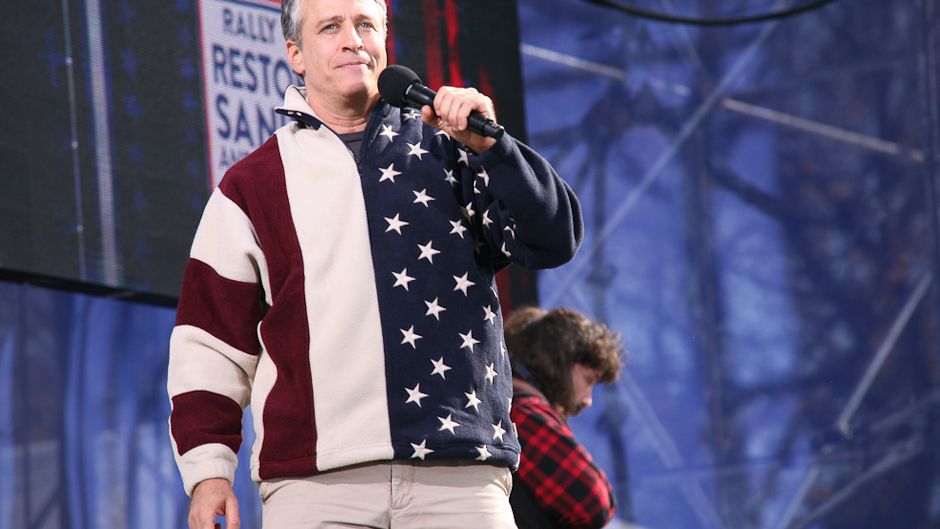 One possible explanation for the amazing and long-running success of the Daily Show, the late night satirical television show on Comedy Central, is the fact that politics has become so bizarre in recent years that we all just need to laugh about it, or we might go crazy.

We need these kinds of fake news programmes to help us let off steam, yet at the same time they provide fascinating insights on current events as they happen. The Daily Show frequently presents an impressive critique of the hypocrisy that oft surrounds contemporary politics in the United States and around the globe.

For many, with most regular viewers in the 18-49 age range, the Daily Show and its offspring the Colbert Report, are the only (or at least most trusted) source of news. The truth is that when you look around the world today — with financial crises, recessions, wars, riots, hunger and on-going environmental destruction (the list grows daily) — you really do need a sense of humour.

If you work in the environmental arena,  and you often find yourself in conversation with friends, colleagues and just about anybody on topics like peak oil or climate change, you can see people’s expression change quickly.

In social situations, perhaps an initial mention of the topic is fine, but then eyes glaze over and you can see people making a mental note “must not invite this guy around for dinner again”. But if you start with the line, “Hey, did you see the Daily Show last night?” well that could make all the difference.

You can then share with them the segment when Jon Stewart explains how the last eight US presidents have gone on television and promised to move America towards an energy-independent future.

So you see, politicians recognise the energy crisis we face. It’s just that they can’t do much about it. You could have written a book on this, but in only a few minutes the Daily Show tells you all you need to know. With a bit of humour, a serious subject can be deftly handled, and the advantage of talking about what you saw on the Daily Show is that it is cool in the popular sense, and you may even get invited back for dinner.

Fake news making up for the failings of real news

The sad reality is that we need fake news because the real television news media is not up to the task of reporting objectively on contemporary affairs due to the polarization that has taken place in recent years, not to mention the need to keep the media corporations and their multinational sponsors happy.

That could explain why a topic like peak oil receives so little attention. If anything, more often than not, the television news media appears to spend most of its time looking for any other alternative explanation to peak oil — speculation, pipeline accidents, restrictions on oil exploration, wars, etc.

For instance, when important research on peak oil is released, the findings are all but ignored. So when the Global Oil Depletion Report was published back in 2009,  perhaps the best coverage was in the The Bugle Podcast from Daily Show correspondent John Oliver and Andy Zaltzman, via TimesOnline.

Their Peak Oil special introduces the report and its finding that there is a significant risk of global oil production peaking by 2020.

John Oliver goes on to remark that “this has caused some panic because it turns out that 2020 is in most people’s lifetimes and is therefore a very serious issue. If it wasn’t until a year like 2120 then that falls very much in the not-my-problem file, and becomes a surprise gift to be unwrapped by future generations, along with the issue of nuclear waste”.

To which Zaltzman responds by explaining that the basic world attitude to peak oil has always been “Nah, it will be fine. Ah, it’s a lovely day what are you complaining about? There’s always one miserable fly trying to s—t in everyone’s soup. Has oil ever run out before? No!”

Let us hope that Oliver and Zaltzman will continue to powerhose nonsense on topics like peak oil all over the world!

A brief history of oil

Perhaps one of the most powerful and engaging satirical looks at peak oil comes from Robert Newman, comedian, author and political activist, with his one-man performance on the “History of Oil,” televised on More4 in the UK in 2006 and released on DVD in 2007.

Drawing on Richard Heinberg’s 2003 book, The Party’s Over, Robert Newman shows himself to be ahead of the curve and better read than most academics working in this field (this author included) and just about every policy-maker out there.

Explaining geopolitics in the 20th and 21st centuries, Robert Newman postulates that Western foreign policy has been a continuous struggle to gain control of Middle Eastern oil. Most of the major military conflicts, traced back to World War I, have been a struggle around oil, posing great concern for how we might respond to the advent of peak oil today.

Robert Newman expounds during his stand-up performance that “we are about to enter a whole new era with peak oil. Petroleum geologists predicted that somewhere between 2006 and 2010 we passed a planetary peak oil spike, Since then, they argue, with every year, there has been and will be less and less net energy available to humankind, no matter what we do.

“It is, I believe, an epoch of such enormity that to make any meaningful comparison at all you have got to go back to the Mayans, to the Romans and the collapse of the last complex civilizations. Because those civilizations, they didn’t collapse because people go bored of being Mayans and Romans.”

To laugh and learn more, tune into the entire performance on Google video or buy the DVD.

For Robert Newman, peak oil and climate change are not just subject matter for his comedy. He is trying to make changes in his life. On his blog, he mentions that:

“It was my intention to make the world’s first ever carbon-neutral television programme when I recorded ‘Robert Newman’s History Of Oil’ for More4 last year. ‘Will there be travelogue?’ the executive producer had asked me.

“’No,’ I said, ‘Apart from all the carbon emissions, what’s the point of sending me halfway round the world to stand outside an oil-refinery in Houston just to deliver two paragraphs to camera? Why not fax the script to the Mexican guy who sells burgers outside the refinery gates and have him read out the script while his mate holds a camcorder?’”

He continues by explaining that when filming the History of Oil at the Hoxton Music Hall, it was “a chance to implement another carbon-neutral strategy. Some of the stage-lighting was powered by two cyclists in the style of Rinky Dink’s famous pedal-powered sound systems. When the cyclists tired, members of the audience took over. For the audience, this meant a sense of involvement in the show. For me, watching them work up a sweat assuaged my resentment that they had all got in for free. I even took a turn myself.”

So there you have it. Peak oil can be a laughing matter. Not so much the fact that it is happening, but more about how everybody reacts to it — whether through denial, anger, resignation or laughter.

It is an emotive subject that lends itself to political satire, mainly by left-leaning comedians who perhaps understand the ramifications for today’s world better than right-leaning comedians, who would rather keep things as they are, while still seeing the funny side of that.

If you have come across some comic interpretations of peak oil online, I hope that you will share them with us in the comments section of this article. But most of all, I hope that some comic relief along the lines described herein can help you come to terms with the reality that is peak oil, sooner rather than later.