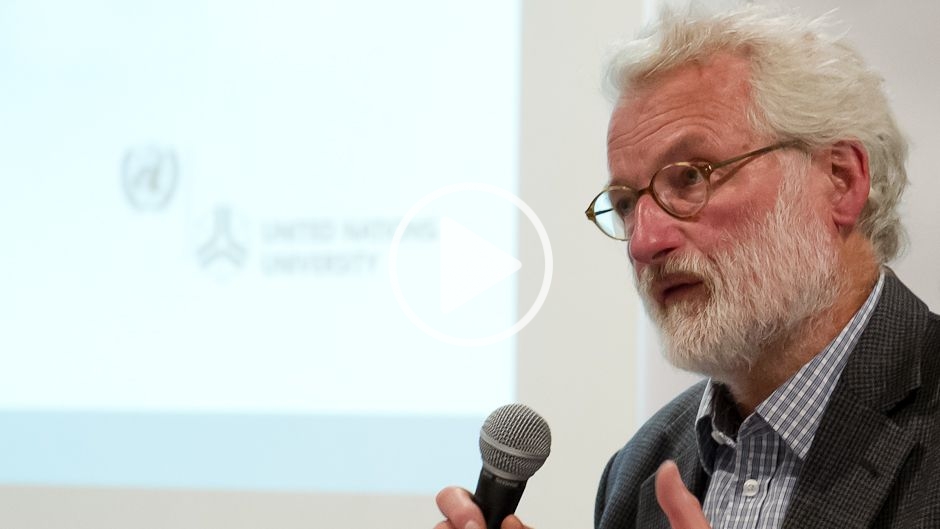 The global population surpassed 7 billion in 2011 and is predicted to reach between 8 and 11 billion in 2050. How can we provide food, water, energy and other basic needs for this ever-growing population without undermining the climate, biodiversity and natural resource base of the planet?

It is clear that global average per capita material consumption far exceeds the level that can be sustained for the 7 billion current inhabitants of planet earth, let alone those soon to join us. Of more fundamental concern is the fact that there are currently 1.3 billion people who face a life of extreme poverty. How can their situation be improved?

This was the subject of a “Science Café” hosted at the United Nations University on 5 October 2012 in collaboration with the British Council Japan and the Institute for Global Environmental Strategies (IGES). The title of the event was “Building a Sustainable Planet — Future Population and Resources” reflecting the findings of the April 2012 report “People and the planet” published by the Royal Society of the United Kingdom (UK).

The problems we are facing are both population and consumption. It’s not either or.

The “People and the planet” project was launched in July 2010 to investigate anticipated changes in population and to look at the interconnections between environmental, technological, economic and social trends. A working group was established to bring together influential academics from the UK, United States, China, Ethiopia, Kenya and Australia and was chaired by Sir John Sulston, joint winner of the 2002 Nobel Prize in Physiology or Medicine. A call for evidence was issued in July 2010 resulting in 104 responses in the period to February 2011.

Insights from the Science Cafe

Sulston was the first speaker at the Science Café and presented the report’s key findings and recommendations. “This is a critical period for humanity,” he observed. “We’re seeing unprecedented and increasing levels of consumption that are very unequally distributed and we are seeing really profound challenges to human health and the environment.”

“The problems we are facing are both population and consumption. It’s not either or.”

He explained that “People and the planet” made nine key recommendations. First, the 1.3 billion people living on less that $1.25 per day must be brought out of absolute poverty. Second, the most developed countries and the emerging economies must stabilize and then reduce material consumption levels.

Third, reproductive health and family planning programmes are urgently required and need political support and financial commitment. Fourth, we need to stop looking at population growth and the environment as two separate issues.

Fifth, connecting with patterns of urbanization, governments should seek to reduce material consumption and environmental impacts through greater efficiencies. Sixth, we need to remove the barriers to high-quality primary and secondary education for the world’s young. Seventh, research on the interactions between consumption, population and environmental impacts needs to be intensified.

Eighth, governments should accelerate the development of comprehensive wealth (i.e., an alternative to GDP).  Interestingly, the UNU International Human Dimensions Programme on Global Environmental Change released the results of its research on this same topic at Rio+20 in June 2012 in the Inclusive Wealth Report.

And finally, the People and Planet report called for a move towards socio-economic systems that are not dependent on continued material consumption growth.

If you have read working group member Professor Tim Jackson’s report “Prosperity without Growth” then you may recognize where the latter recommendation came from.

The beginning of an informed dialogue

Should we continue with incremental changes to the global social and economic structures, or do we need revolutionary/systemic changes as rapidly as possible?

One of the key concerns, raised by Dr. Bengtsson, was that many of the trends appear to be moving in the wrong direction. He argued that the long-hoped-for decoupling of environmental impact and economic activity does not appear to be happening.

The other major discussion point was on the type of socio-economic systems that are needed in order to ensure that we can tackle issues of population growth, poverty and environmental impact. Should we continue with incremental changes to the global social and economic structures, or do we need revolutionary/systemic changes as rapidly as possible? A related question arose as to whether it may be possible for developing countries to “leapfrog” to more sustainable models of development and to dematerialized consumption.

Sir Sulston brought the discussion to a close by arguing that solid research will play an essential role in both informing the debate and in providing a basis upon which opinion-makers and shapers can influence both national leaders and the public in order to bring about the necessary changes. He urged that all options be looked at thoroughly and that the recommendations made be based on sound, scientific research.

People and the Planet by Brendan Barrett is licensed under a Creative Commons Attribution-NoDerivs 3.0 Unported License.

Stephanie Dietrich was a writer and editor for the United Nations University in 2012. She studied International Relations at both the graduate and undergraduate levels at the Australian National University. She is interested in human rights and development issues as well as Latin American politics. Stephanie previously spent six months working with orphaned children in Mexico.