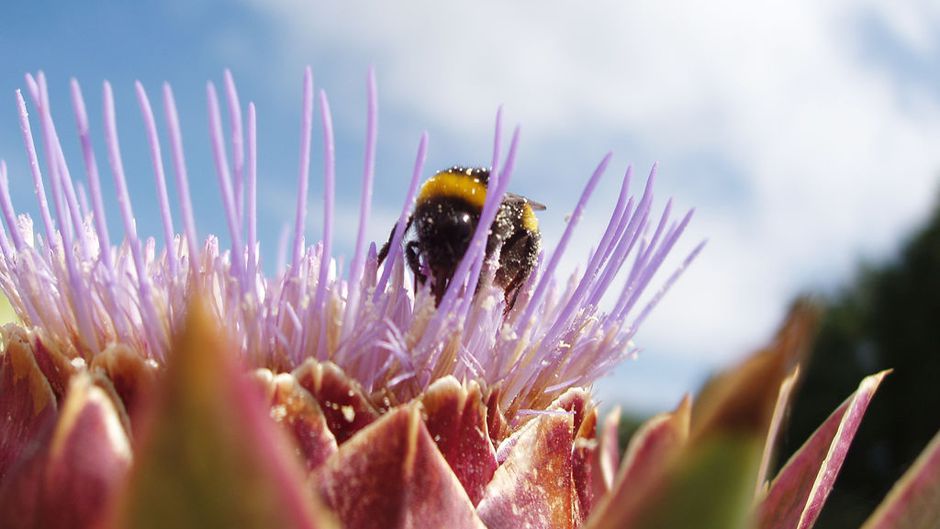 Bumblebees exposed to controversial pesticides collect just half the pollen they would otherwise harvest, according to new research, depriving their growing young of their only source of protein.

The work has been hailed as important by independent scientists because it sheds light on how the neonicotinoid pesticides can harm bees.

“Pollen is the only source of protein that bees have, and it is vital for rearing their young,” said Professor Dave Goulson, at the University of Sussex and who led the study. “Collecting it is fiddly, slow work for the bees and intoxicated bees become much worse at it. Without much pollen, nests will inevitably struggle.”

A two-year EU ban of three neonicotinoids, the most widely used insecticides in the world, began in December, following research that showed harm to honey and bumblebees. The neonicotinoids are “systemic” pesticides, being applied to seeds so that the chemical spreads within the plants. Over three-quarters of the world’s food crops require insect pollination, but bees have declined in recent decades due to loss of flower-rich habitat, disease and pesticide use.

Goulson’s team tested one of the three, called imidacloprid, at low doses aimed at replicating those encountered by bees in fields. They attached tiny electronic tags to bees so their movements could be tracked and each bee was weighed on its way in or out of the nest.

Bees exposed to the neonicotinoid brought back pollen from only 40 percent of trips, while unexposed bees carried pollen back from to 63 percent of trips. Furthermore, exposed bees that did return with pollen carried 31 percent less than unexposed bees. Overall, the nests exposed to the pesticide received 57 percent less pollen. The ability of bees to collect sugary nectar did not differ significantly between the bees. The work is published in the peer-reviewed journal Ecotoxicology.

“Even near-infinitesimal doses of these neurotoxins seem to be enough to mess up the ability of bees to gather food,” says researcher Hannah Feltham.

Hannah Feltham, at the University of Stirling and another member of the research team, said: “This work adds another piece to the jigsaw. Even near-infinitesimal doses of these neurotoxins seem to be enough to mess up the ability of bees to gather food. Given the vital importance of bumblebees as pollinators, this is surely a cause for concern.”

Earlier work by Goulson’s group showed exposure to neonicotinoids led to 85 percent fewer queens being produced. The new work suggests a reason why: because there is less food in the nest. Other work showed neonicotinoids seriously harmed bees by damaging their renowned ability to navigate home.

Goulson added: “It is unclear what will happen when the [EU ban] expires, as the agrochemical companies that produce them are in a legal dispute with the EU over their decision. Our new study adds to the weight of evidence for making the ban permanent.”

Lynn Dicks, an ecologist at the University of Cambridge, said: “This is a very important study, because it provides further detail on how bumblebee foraging is made less efficient by exposure to imidacloprid at these levels.”

But she added: “The important questions over what is a ‘field-realistic’ dose are not settled and they remain open. The [levels in this study], particularly the pollen level, are at the upper end of what is found in the field, and likely to be higher than what bumblebee colonies are actually exposed to, because they don’t feed exclusively on oilseed rape.”

Pesticide manufacturers argue that controlled studies do not replicate actual field conditions. Julian Little, a spokesman for Bayer, which makes imidacloprid, said: “It would appear the bumble bees are essentially force-fed relatively high levels of the pesticide in sugar solutions, rather than allowing them to forage on plants treated with a seed treatment. Real field studies, such as those being initiated this autumn in the UK will give more realistic data on this subject.”

Researchers have argued that conducting properly controlled field trials is difficult, because neonicotinoids are very widely used and bees range over wide areas in search of food.