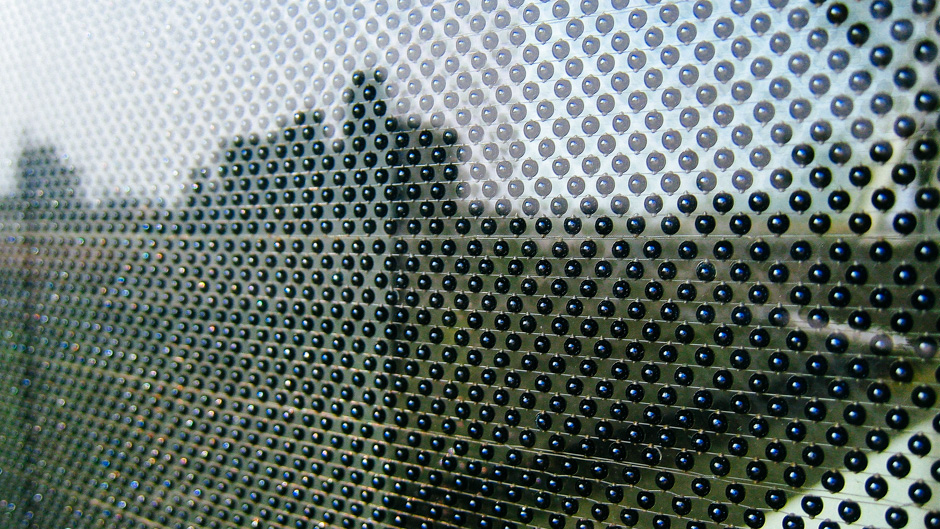 There are great expectations for the development of technologies that emit low (or no) amounts of greenhouse gases (GHG). While appropriate innovation policies are required in order to incubate such advancement, innovation is not a singular process but rather a mixture of different practices — including fundamental research and development (R&D), commercial R&D and commercial applications.

That last step is the most challenging; often a technology fails to take off because, as it leaves the laboratory and is poised to enter the market, it cannot be priced low enough to access a level playing-field with existing technologies. To avoid this “Valley of Death”, which refers to the gap between lab and marketplace, policy innovation that assists technology diffusion into the market is key.

Many GHG-mitigating technologies are in the category of “waiting-list technologies” and require new pricing mechanisms and market systems that incorporate externalities. As Japan has scarce local fossil fuel reserves, renewable energy has been on the Japanese government′s energy policy agenda for decades. Particularly after the oil crisis, the government allocated a significant amount of its budget to renewable energy R&D, yet surprisingly little attention has been paid to deployment.

As Japan has scarce local fossil fuel reserves, renewable energy has been on the Japanese government′s energy policy agenda for decades.

Against this background, in 2003, the Japanese government enacted legislation based on a Renewable Portfolio Standard (RPS) scheme that requires electricity retailers to supply a certain amount of renewable electricity to grid consumers. Certified renewable energy generators earn certificates for the renewables they produce, and sell these (along with electricity) to supply companies. The latter then use the certificates to demonstrate their compliance to the regulatory body.

The RPS legislation was expected to ensure market efficiency, as well as to bring a steady increase of renewable capacity. Prior to the adoption of RPS, there were vociferous calls from the civil society requesting that the government introduce another policy model instead. The Feed-in Tariff (FIT) is a policy generally proven to be successful in the member states of the European Union.

RPS mechanisms purportedly ensure that market implementation will result through competition, delivering renewable energy at the lowest possible cost. FIT schemes, on the other hand, guarantee purchase of all renewable energy, regardless of cost, as they are designed to accelerate investment in renewable energy technologies by offering long-term contracts to renewable energy producers.

The Japanese government and the country’s electric utilities, however, pushed hard for RPS over FIT, as they adhere to the traditional policy hegemony channels (led by the United States) favouring market-based models. The ideological culture thus refused to emulate the European model, as it was clear that this would significantly impact renewable energy penetration in Japan and be a threat to the institutions that were wanting to maintain the status quo.

The RPS scheme did not lead to a quantitative increase in renewable energy capacity, or to a price decrease in power generated from renewables, as had been claimed. Instead, it became evident that Japanese renewables, especially photo-voltaic (PV), were losing share in the international markets. Losing the competitive edge within the PV industry was a concern to policymakers as well as to manufacturers, to the extent that they finally accepted the need to change renewable policies. 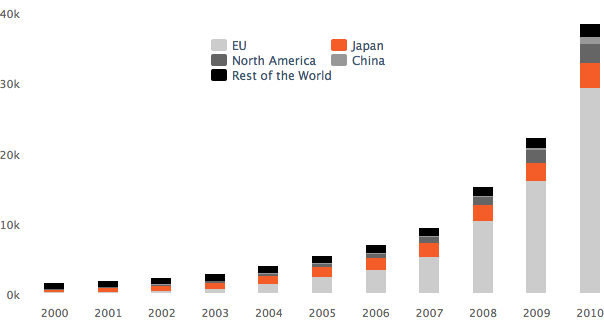 Further, the electric utilities somehow accepted the need to encourage PV. After the 1990s electricity market liberalization in Japan, the country’s electric utilities have been keen to exploit the residential energy market in order to successfully compete with independent power producers and gas companies. Their marketing strategy was to sell packages of home appliances that can be supplied by electric heat pumps and PV modules. This allows residential customers the ability to use PV energy during the daytime when the electricity price is higher.

Because of the international competitiveness of PV technology and utilities’ acceptance of it, this technology was chosen as the first energy type for which a renewable energy scheme would be developed. In 2009, Japan introduced a FIT scheme by which electric utility companies were obligated to purchase excess electricity generated through (mainly residential) PV facilities. The PV fixed price purchase scheme worked in parallel with the existing RPS scheme and was designed so that prices decrease over time as a scale merit (economy of scale) is achieved. The purchase term is 10 years and the cost of the whole system, including installation and actual infrastructure cost, is allocated to electricity users in the form of an additional charge on the utilities’ bill.

The PV fixed price purchase system became an incentive for households to install PV. The impact of the system was soon obvious, as can be seen in the figures below, which show a dramatic increase in installed PV generating capacity after introduction of the scheme (as per data from the 2011 European Photovoltaics Industry Association Report). Together with subsidy and tax reduction programmes for residential PV systems, the PV fixed price purchase system became the main driving force for an increase in PV cell demand. It pushed up the production of residential PV systems, with 6,651 GW produced domestically since its introduction in 2009.

A window for change

There is a theory that maintains that policy innovation happens only when a rare opportunity for change occurs. In Japan’s case, one might argue that such a window was created by the devastating energy crisis that occurred after the 11 March 2011 earthquake and tsunami destroyed the Fukushima Dai-Ichi nuclear power plant and other generators. A recent opinion survey showed that more than 58 percent of the general public supports abolishing nuclear power, with 55 percent favouring an increase in the use of renewable electricity — even if that means higher utility bills.

Drastic political changes, events or crises could thus cause an unexpected intensity of public attention to particular problems, which become a driving force for policy change. 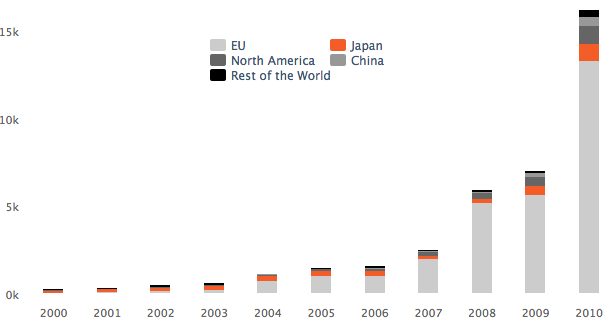 Indeed, after postponing it in 2011 due to the Fukushima Disaster, the Japanese Diet (parliament) revised the FIT scheme in June 2012, making it one of the highest such tariffs in the world. Further, the incentive programme now extends to other types of renewable energy: wind, hydro, geothermal and biomass. And according to a recent announcement by the Japan Photovoltaic Energy Association, the new scheme’s momentum is impressive. Domestic shipments of solar cells and modules rose 80 percent in the July-September quarter, immediately following expansion of the scheme. Domestic shipments increased to 627 megawatts from 348 megawatts in the same quarter last year.

While this is positive news, some observers argue that in order to ensure that the FIT system can be effectively and efficiently implemented, the government must address a number of challenges through deregulation to assist the development of renewable energy projects and enhancement of the power grids to enable expansive cross-regional power transmission within the country.

There have always been discussions as to how innovation policy could play a role in the incubation of environmental technologies. However, as mentioned above, policymakers often fail to innovate policies in such a way that the emerging technologies get out of the incubator and beyond the “Valley of Death”.

It has been argued that if a policy’s design is effective, which could successfully make a technology available in the market, the policy would be diffused and adapted in different policy contexts. The Japanese experience with renewable policy choice, however, seems to challenge this assumption, demonstrating a case where a policy design with economic rationale and empirical evidence of its ability to bring new energy technologies to penetrate a market was not adopted. Instead policymakers chose a policy design with sub-optimal effect.

The main reason behind this choice was political judgement and biases, as discussed above. Sustainability requires a normative approach in which a specific political system adapts to changes and implements the approach. Thus sustainable transition is, in essence, a political project, as proposed by James Meadowcroft.

[quote quote=”The rationale used by some policymakers may come from economic considerations and industrial pressures, and the sustainability argument may not be viewed as a firm basis for their policy formulation.” type=”text” ]

Looking at the reality of policy choice — Japan, in this case — highlights the importance of understanding the political rhetoric behind decisionmaking. Japanese renewable policy illustrates just one example of the political dimension of policy innovation. What policymakers cared about most was not necessarily sustainable energy transition, but had more to do with economic rationale and the interests of relevant industries.

In other words, for some policymakers, policy design matters less than political drivers. The rationale used by such policymakers may come from economic considerations and industrial pressures, and the sustainability argument may not be viewed as a firm basis for their policy formulation. For policy innovation analysis, understanding these political motives is very important, as politics may be a precondition to policy innovation.

Only after an empirical understanding of political motives is gained can the politics of sustainability transition be argued. This could entail a possible transition to new political contexts where the decision-making roles of existing political powers and emerging technologies and interests would be redefined.

It is important to understand how a new policy is conceived, disseminated, diffused, and “takes off” as an embedded notion to a political agenda, quite similar to the technology transition process itself. Political transition holds the key to making policy innovation available in reality, and political transition to sustainable development needs to be furthered analyzed and investigated.

This is based on a study on the topic that was published in Sustainability Science.

Joni Jupesta is a Japan Society for the Promotion of Science-UNU Postdoctoral Fellow at the United Nations University Institute of Advanced Studies. An Indonesian citizen, in 2010 he gained his PhD in Management Science and Technology from Tohoku University, Japan. He was one of 25 scientists selected to receive the 2012 Green Talent Award from German Federal Ministry of Education and Research.