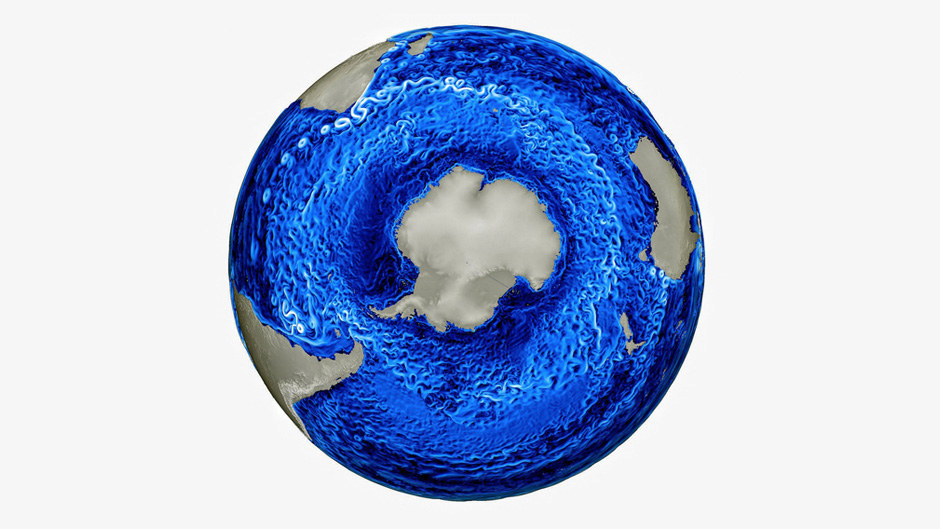 Los Alamos National Laboratory visualization of the currents swirling around in the Southern Ocean surrounding Antarctica, edited by Stuart Rankin.

Like a giant lung, the Southern Ocean seasonally absorbs vast amounts of carbon dioxide (CO2) from the atmosphere and releases some of it back later in the year — but not all.

The end result: The ocean removes a large part of the CO2 that human activities emit, slowing down the growth of greenhouse gas in the atmosphere.

Although the Southern Ocean represents no more than a quarter of the total surface of the world’s oceans, it accounts for 40 percent of the global oceanic uptake of that man-made CO2.

A decade ago scientists thought the Southern Ocean carbon sink was beginning to saturate, as models suggested the amount of carbon absorbed had not increased since the late 1980s. This was unexpected since the assumption was that the higher the concentration of CO2 in the air, the greater the amount of CO2 the ocean would absorb. 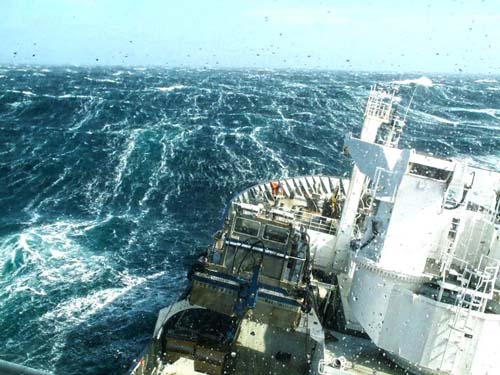 A research vessel ploughs through the waves, braving the strong westerly winds of the Roaring Forties in the Southern Ocean in order to measure levels of dissolved carbon dioxide in the surface ocean. Photo: Nicolas Metzl, LOCEAN/IPSL Laboratory.

But new research published in Science this week indicates the Southern Ocean carbon sink has become much stronger since 2002 — roughly doubling to 1.2 billion tonnes in 2011 (equivalent to the European Union’s annual man-made greenhouse gas emissions).

Nicolas Gruber, a professor of environmental physics at ETH Zurich who led the study, says the results suggest that the strength of the Southern Ocean carbon sink fluctuates strongly, possibly in periodic cycles, rather than increasing monotonically in response to the growth in atmospheric CO2.

“We were surprised to see such large variations in this ocean’s net carbon uptake,” he says.

“A strong carbon sink in the Southern Ocean helps to mitigate climate change for the moment, as otherwise even more CO2 would have stayed in the atmosphere, but we cannot conclude that this will continue forever,” Gruber told the Guardian.

“One has to recognise that despite this remarkable increase in the Southern Ocean carbon sink, emissions have gone up even more.”

Gruber and colleagues attribute the reinvigoration of the carbon sink above all to changes in the prevailing weather patterns in the studied region.

Since the turn of the millennium, the dominant atmospheric pressure systems have exhibited an increasingly asymmetrical distribution. A powerful high-pressure system has built up above the Atlantic sector of the Southern Ocean, while a distinct area of low pressure has formed over the Pacific sector.

Winds now tend to blow in an undulating pattern, whereas in the 1990s they mainly blew straight from the west to the east.

The air pressure gradient between these regions of high and low air pressure has caused wind patterns to change. Winds now tend to blow in an undulating pattern, whereas in the 1990s they mainly blew straight from the west to the east. In the 1990s these winds were also stronger over much of the Southern Ocean, causing more water to be upwelled to the surface from depth.

Since these deeper waters contain higher concentrations of dissolved CO2, this upwelling led to an anomalous release of this greenhouse gas into the atmosphere, resulting in a stagnation or even a decrease in the ocean’s net carbon uptake.

Since the turn of the millennium, upwelling has generally subsided in all sectors apart from the Pacific, stopping the release of stored CO2 into the atmosphere. But the winds have also changed the temperature of the surface water.

By bringing warm air from subtropical latitudes into the South Atlantic, they have warmed the surface waters of the South Atlantic substantially. At the same time, the anomalous low-pressure system in the South Pacific brought exceptionally cold air from the interior of the Antarctic continent to this sector of the Southern Ocean, leading to a strong cooling there.

Together, the wind and temperature changes explain much of the reinvigoration of the Southern Ocean carbon sink.

The cooling of surface waters in the Pacific sector enables them to absorb more CO2. In the Atlantic sector, on the other hand, changes in the wind-driven circulation patterns are likely responsible for the higher oceanic uptake of atmospheric CO2.

The reinvigoration of the ocean’s carbon sink has occurred during a period when global air temperatures have changed very little, which is possibly related to a stronger heat uptake by the ocean.

Peter Landschützer, a postdoctoral researcher involved in the study, says the model can’t predict how the pattern will change in the future, “so it is very critical to continue measuring the surface ocean CO2 concentrations in the Southern Ocean”.

“This is particularly important since current models are not able to reproduce the observed variations,” adds Gruber. Hence, longterm datasets are the only reliable means for determining the future evolution of the ocean’s sink for carbon.

Another factor that is not yet fully understood is the effect of large-scale climate phenomena such as El Niño and La Niña on the Southern Ocean carbon sink. It is particularly noticeable that the reinvigoration of the carbon sink coincides with a period of prevalent La Niña conditions — i.e., relatively cool sea surface temperatures in the Pacific.

The reinvigoration of the ocean’s carbon sink also occurred during a period when global air temperatures have changed very little — the so-called climate warming hiatus, possibly related to a stronger heat uptake by the ocean.

Research Shows Revived CO2 Uptake by Southern Ocean by Peter Rüegg is licensed under a Creative Commons Attribution 4.0 International License. Based on a work at Futurity.

Peter Rüegg is part of the communications team at ETH Zurich.