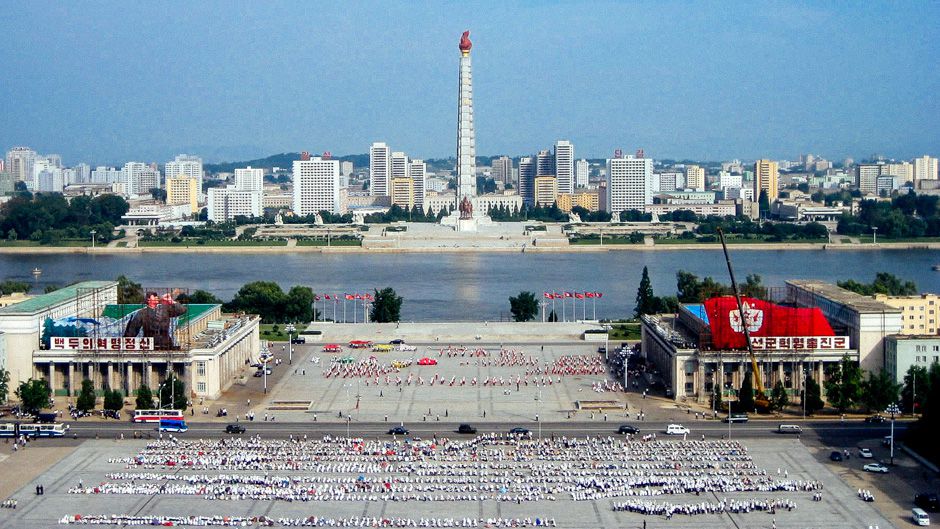 After the Korean War ended in 1952, both North and South Korea became post-war societies in urgent need of a functioning system of governance. Unfortunately, compared to agendas such as development and military security, environmental stewardship was quickly swept off into the periphery for both countries. 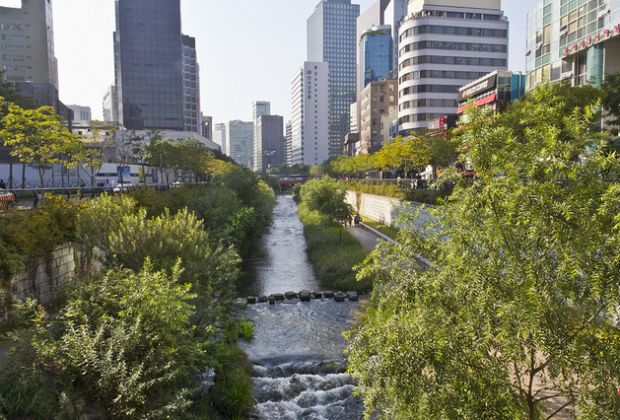 After the Korean War, the Cheonggyecheon Stream, which was functioning as an open sewer, was covered by pavement and forgotten. A $384 million recovery project daylighted the stream corridor as an urban natural amenity. Photo: Kaizer Rangwala.

The extent to which the Taedong River in the North (Democratic People’s Republic of Korea — DPRK) and the Han River in South Korea (Republic of Korea) are polluted can perhaps act as a barometer of the extent of industrial pollution in each country; direct discharge was a common occurrence in both countries during their early stages of industrialization.  Indeed, during the years when both countries pursued rapid development at the conclusion of the war, these rivers essentially became swamps due to the amount of industrial waste that would regularly be deposited directly into the water.

Before division, what is now North Korea was prized by all Koreans for its pristine and picturesque landscape. Even after the war, the DPRK proudly emphasized its responsible environmental standards in contrast to the industrial slums of South Korea during the 1960s and 1970s. This difference could be explained by the ways that the two countries attempted to reach self-sufficiency from 1945 through the 1970s: the ROK moved in the direction of becoming an export economy while the DPRK focused self-sufficient agriculture.

It was not until the 1980s, with the founding of the Ministry of Environment, that South Korea began to pay more attention to its ecological resilience. Over the past 30 years, however, the country made significant progress in improving the state of its environment, which includes a five-year plan to boost its green industries. The results of South Korea’s efforts are clearly manifested in the capital Seoul, where, among other environmentally-friendly facilities, electric buses, cars and bikeways are common.

The Cheonggyecheon Stream in Seoul was restored as a part of an urban renewal project. According to the Korea Water Resources Association, the stream acted as incentive for people to walk, bike or use public transportation rather than drive private automobiles.

South Korea’s neighbour to the north, however, has not shared the same progress. The degree to which the DPRK is “susceptible to, and unable to cope with, adverse effects of climate change”, which is the 1997 IPCC definition of vulnerability, became commonly known to the world in the mid-1990s due to the droughts and floods that led to widespread famine in the country. The government’s poorly designed agricultural policies allowed large-scale deforestation and soil erosion in the name of economic development, which ultimately contributed to the country’s vulnerability.

According to a State of Environment Report prepared by the United Nations Environment Programme (UNEP) in cooperation with North Korea in 2003, there have been improvements in the sustainable development of ecosystem services, but natural disasters and economic hardships pressure these areas. For example, a 2004 Water Environment and  Technology briefing entitled, “First Report on North Korea’s Environment Documents Severe Water Pollution,” cited that almost 30,000 cubic meters per day of industrial wastewater produced by several factories is discharged directly into the Taedong River, which then flows through the capital city of Pyongyang.

As the UNEP report explains, water treatment plants operate intermittently, which proved to be particularly troublesome in the face of greater domestic sewage associated to population growth and the increasing use of pesticides and fertilizers.

The water security of the DPRK is further threatened by limited sewage networks, which fail to reach small towns in rural areas, resulting in direct discharge into rivers — rivers already experiencing low water levels due to sustained drought and the extensive use of surface water by hydropower, which utilizes 77% of gross water resources, and agriculture, which accounts for 12.8% of surface water usage.

North Korea’s increasing energy demand due to population growth — which increased from 1960 to 2010 by roughly 13.4 million according to World Bank statistics — and industrialization characteristics such as increased consumption (combustible waste increased to 1046 metric tons in 2009 from 681 according and electric power consumption per capita grew from 919 kWh in 1971 to 1334 kWh in 1984), further strained the country’s environment.

For instance, higher energy demand led to excessive firewood usage, cutting away at the DPRK’s forest stocks and further compounding the existing vulnerability posed to forests by drought and farmland conversion. The UNEP report identified attempts at industrialization using outdated coal-burning technology imported from China and the former Soviet Union, which represented 38% of the DPRK’s energy production in 2009.

The environmental prognosis of North Korea isn’t completely bleak — at least for now. In the past three decades, the sprint towards economic development is becoming more gradual and farsighted. This trend is evident normatively by the amount of political movement, including legislation, seen within the DPRK (see timeline below), as well as empirically, represented by decreasing energy consumption per capita from 1984 to 2009 and a decrease in industrial carbon emissions from 1985 (83.67 million metric tons) to 2008 (43.62 mmt).

This has, in turn, allowed North Korea to take on a more diversified policy agenda, one that includes environmental awareness. The “Law of Environmental Protection”, which was put into force in April 1986 during the 5th Plenary Session of the Supreme People’s Assembly (the legislature of the DPRK), was the first in a series of policies that focused on the environment. 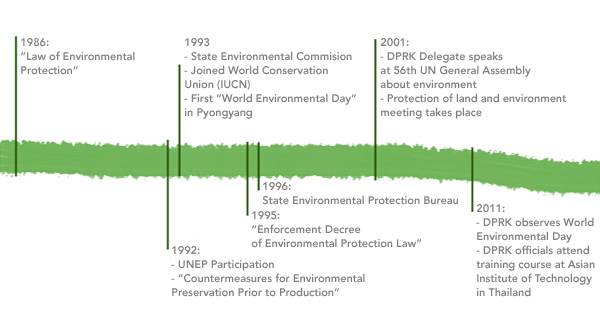 Compiled by the author from various sources.

The Korea Central News Agency, the DPRK’s primary news network, reported a fair amount of activity after the turn of the century, with meetings of fairly high-level officials to discuss the environment. One noticeable trend is a greater focus on land management, with one meeting in 2001 reportedly focused on irrigation and transformation of land, and another held in 2011 on environmental preservation through tree farming.

However, these reports additionally represent a larger issue when trying to obtain facts about North Korea: the government controls information extremely tightly and only rarely are reliable and independent sources such as UNEP available from which to draw. 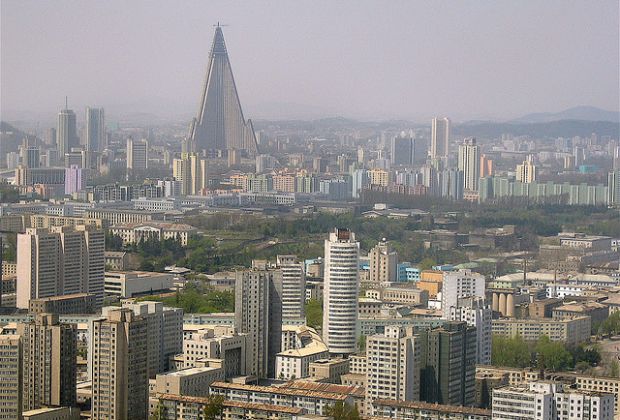 The DPRK has been slowly opening up to the world by engaging in cooperative efforts with international organizations. In 2001, the leadership pledged to observe environmental efforts faithfully and urged more developed country support to less developed countries through financial and technological assistance. This is particularly significant because this preceded the landmark survey that UNEP was allowed to conduct to produce its State of the Environment Report in 2003, which was and continues to be the most comprehensive look into the environment of the DPRK to date.

After the UNEP report, international cooperation slumped until 2011, when a UNEP delegation was allowed back into North Korea on World Environment Day, which was held under the theme of forest conservation. This was a result of the DPRK’s increasing recognition of the important role that its forests play in not only the country’s resilience, but also as a crucial ecosystem service.

This theme was continued later in year, when the DPRK participated in a four-week training program on “Promoting Regional and Economic Cooperation in Northeast Asia” held by the United Nations Economic and Social Commission for Asia and the Pacific (ESCAP) at the Asian Institute of Technology in Thailand.

With such limited and intermittent reports on the state of the environment in North Korea, disasters are often the only peek into the country. Two examples of this include the 1995 famine, during which time the amount of coverage on the country’s affairs increase dramatically, partially due to the number of high-level visits and summits that occurred during the year, and the 2004 Ryongchon train explosion disaster, which paved a way for relief services.

North Korea has showed that it is willing to take certain risks in its goal towards self-sufficiency. One example of this willingness is the DPRK’s attempt to barter a deal with Taiwan in 1997 to store Taiwanese low-level nuclear waste in abandoned mines in North Korea for foreign capital, despite clearly lacking the infrastructure to guarantee the prevention of groundwater seepage.

But this example underlines a broader trend where, even when the DPRK occasionally demonstrates the political will to become a better steward for its environment, the country is incapable of implementing sustainable solutions. Although the country broaches topics of land management and biodiversity, as is demonstrated by the DPRK’s involvement in legislative and multilateral attempts to address these issues, the country demonstrates less willingness in politically sensitive areas such as food and energy security.

Admittedly progress since the Environmental Protection Law of 1986 has been slow, there are signs that DPRK officials are becoming more open to working with United Nations agencies. What is needed for is for the various organs of the UN to place a greater emphasis on incentivizing the government to embrace sustainable development like trying to meet the Millennium Development Goals.

One way that the UN can do this is in coordination with key member states to provide the capacity for sustainable development, like the Republic of Korea and Japan, which have the capital, infrastructure and volition to assist, but oftentimes are ensnared by internal political opposition. The UN can also invite countries that have effective policies and infrastructure in socio-ecological and environmental resilience and adaptive capacity, such as Australia, Costa Rica and Kenya, to offer knowledge and case studies.

The UN can also offer incentives for the DPRK in concert with bodies like the World Bank, which can offer tied loans or project financing to meet further development goals, as was done with the United States during the 1994 Agreed Framework involving light-water reactors.

North Korea showed that it has the potential to embrace change to improve its environmental standards by adopting practices in sustainable development in areas such as land management. However, whether this potential will remain consistent, particularly with the political uncertainty that awaits North Korea with the succession of the power made necessary by the passing of Kim Jong Il, is yet to be seen. Nevertheless, the efforts by North Korea to confront its environmental vulnerability acted as a bridge for cooperation with an otherwise closed-off society — a major development in North Korea relations that warrants further pursuit.

Soo-hyun Lee is currently an M.Sc. student at the United Nations University Institute of Sustainability and Peace. His studies and research focuses on the relationship between law and development.