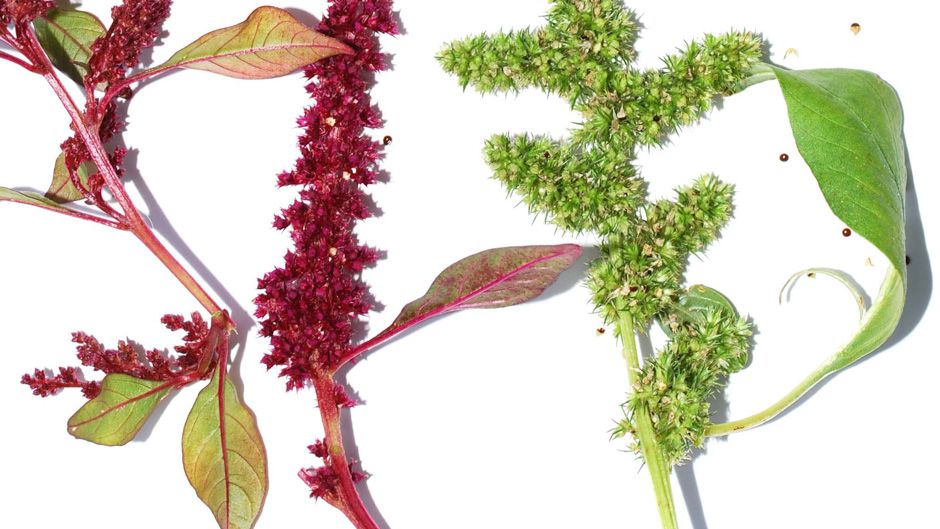 It was only going to be a matter of time before Nature caught up with the over-abundant use of herbicides. Particularly regretful is the advent of glyphosate — made famous by Monsanto with their product called Roundup — and the ensuing reliance of the United States’ agricultural industry on corn, soy bean and cotton seeds that the company genetically modified (GM) to resist Roundup.

Studies began documenting weed resistance several years ago but the problem continues to mount, with The New York Times warning of the “Rise of the Superweeds” analogous to that of the ‘superbugs’ in medicine. About 22 US states and many millions of acres are apparently affected by the scourge, in particular a plant dubbed ‘Palmer pigweed’ that has developed the ability to thrive on glysophate.

It seems Monsanto may have long ago anticipated the inevitable failure of the devious combo of genetically modified seeds plus Roundup. The company started experimenting with a ‘souped-up’ Roundup almost 10 years ago, to manage the problem of superweeds. Not that this is today any consolation to the farmers who are suffering from the expense of buying costly products that do not work, leaving them with lower crop yields.

Indeed, Monsanto’s own website includes instructions encouraging farmers to mix glyphosate and older (i.e., leftover) herbicides such as 2,4-D, a herbicide which was banned in Sweden, Denmark and Norway over its links to cancer, reproductive harm and mental impairment. 2,4-D is also well known for being a component of Agent Orange, a toxin used in chemical warfare in Vietnam in the 1960s. Imagine that, Agent Orange finally coming home to fight the superweeds: a dark sequel to Vietnam in the making?

You call that a weed?

Now let’s look at the vilified pigweed for a minute. First the name, ‘pigweed’, makes it an easy target for demonizing. Who could possibly appreciate something so base as ‘pig’ and ‘weed’ combined?

Before we go any further, I would like to state the true and dignified name of pigweed: it is used to refer to several wild species of the genus Amarantus. The word comes from the Greek amarantos and means the “one that does not wither,” or “never-fading”.

This plant family includes a wide variety of species, some of which are cultivated for their nutritious leaves (oft-compared to spinach), others for their grain (which is actually a pseudo grain or seed). Various wild species of amaranth are saddled with the label pigweed, particularly in North America, and several of those now feature on the list of the world’s weeds that have developed a resistance to glyphosate.

(Apparently, the weedy types are also edible and taste much like the cultivated kinds. They simply don’t grow as large or produce as many leaves or seeds.)

The ‘never fading’ aspect therefore seems not just refer to the flower — which indeed keeps its deep reddish or rust color for a long time — but it also aptly applies to the sheer tenacity of the plant itself. It flourishes in a large variety of soils (from acidic to alkaline) and climates (from hot to cold); wild amaranth comes back without being planted; it grows in dry conditions; and some species thrive even in fields treated with glysophate — never fading.

My own relationship with amaranth began around 1983. I wanted to make a special bread for my business, the Cloud Cliff bakery, at that time just a tiny venture in the Barrio of Santa Fe, New Mexico. I was looking for something indigenous, hardy, and full of protein and rare nutrition (such as minerals and vitamins).Through the Rodale Institute, I stumbled upon the humble amaranth, long cultivated by many peoples around the globe, including ancient cultures like the Romans and the Aztecs who valued it in ritual and as a staple food.

Amaranth seeds have a protein content of about 16 percent, more than other widely consumed cereals like conventional wheat, rice or maize, according to a book on the topic by the US National Research Council. Amaranth’s protein digestibility score is an impressive 90 percent, much higher than problematic foods such as soy, milk and wheat.

Amaranth seeds contain 5 percent to 9 percent high-quality oil, again, much higher than the common grains. Found in the amaranth oil are tocotrienols — a relatively rare and very beneficial form of vitamin E — and squalene, another rare compound reported to have anti-cancer properties.

The seeds have a protein content of about 16 percent, more than wheat, rice or maize and a digestibility score much higher than soy, milk and wheat.

Vegetable varieties, though undervalued and looked down upon in some cultures, are also a nutritional powerhouse. There is even one species that is both a seed producer and a vegetable, Amaranthus cruentus.

The seed is small and hard and it requires some processing to make it digestible. But, as with other grains, it can be prepared by using simple low-energy techniques. Cleaned, unprocessed seeds can simply be boiled briefly to make porridge. If toasted, the seeds taste better and can be eaten without further preparation. As is common in Mexico and Central America, amaranth can also be popped or puffed. I started exploring ways to bake with amaranth and settled on germinating the seed to soften it before adding it to bread. Experimental plots in New Mexico and Nebraska provided the amaranth grain.

Cloud Cliff’s “Aztec amaranth bread” became my first commercial best seller, and people loved not only the taste, they enjoyed the health benefits as well. I have had many anecdotal comments on this over the years. So even now, after 26 years, I still bake with amaranth, and I highly respect it as “an ancient grain for our future”.

What’s in a word?

Calling amaranth “pigweed” or “superweed” is perhaps an attempt by Monsanto and others who fall into the trap, to make an ideological statement. In 1984 when the New York Times first discovered amaranth, Jane Brody wrote about it like this:

“Agricultural researchers are cautiously hailing this relic of antiquity as ‘the grain of the future’ for its potential to provide protein, vitamins and minerals to people worldwide, including the United States.”

Then, 26 years later the NY Times writes again about amaranth, but this time referring to it only as pigweed and describing it as the main invasive superweed. I believe this is an example of how language can manipulate perception. In other words: classifying amaranth as a superweed and ignoring its noble heritage and untapped potential is an ideological statement designed to make the proposed solution (reviving the toxic herbicide used in Agent Orange) seem rational.

We need to look at this problem of invasive weeds very differently and luckily in this case we have a great opportunity to do so. Amaranth’s protein filled seed heads weigh up to two pounds and are relatively easily harvestable. Amaranth grows great where others can’t. In this age when we devote too much acreage to GM crops, Nature seems to be offering us a gift in the form of amaranth.

The challenge should therefore be not to destroy it, but rather find ways of processing it into flour, bread, candy, and high quality green roughage and distributing it into the markets of affluent countries that currently rely on very resource-intensive protein (i.e., livestock), as well as sharing products and/or agricultural knowledge with nations where nutrition is scarce and people are hungry.

Malnutrition is widespread in sub-Saharan Africa. Easy-to-grow nutrient rich foods, can boost nutrition and food security in communities that depend on subsistence agriculture. Amaranthus cruentus (the species that is both a seed and vegetable) is known as both easy-to-grow and nutritious. Further, it is among the highest-yielding leaf vegetables of the tropics.

Amaranthus cruentus (the species that is both a seed and vegetable) is known as both easy-to-grow and nutritious and is among the highest-yielding leaf vegetables of the tropics.

Thus you can see why I take such offence at the prevailing attitudes towards amaranth guised as pigweed. Rather than being torched with toxic agents, should not the wild plant relatives of such superfood warrant research and development?

Sadly it seems to me that before the advent of corporate agriculture, farmers used to be more self-reliant and cunning. They always saw opportunities where others didn’t or couldn’t care. History is filled with examples of this, but let me just quote one:

“Rye came into the world suddenly in the form of a revolt of the lowly. In Pontos, on the shore of the Black Sea — a city surrounded by excellent wheatland — grain ships were loaded to take seed to southern Russia. A few weeds that none regarded became mixed with the seed. But Behold! When time came for sowing, the soil proved too harsh for the wheat, and the weed flourished mightily. Rye had abruptly become a cultivated plant. The sowers intelligently exploited the accident, and within a few hundred years rye had spread to many soils that had been exhausted by continual crops of wheat.” (H. E. Jacob in Six Thousand Years of Bread, 1944)

So I propose that we adjust our research, technology and diets and start a more wide-spread processing of the mighty amaranth into food. We potentially have millions of acres of it. Amaranth is a gift and we better learn how to use it.

Rethinking a weed: the truth about amaranth by Willem Malten is licensed under a Creative Commons Attribution-NoDerivs 3.0 Unported License.

Willem Malten is a baker, filmmaker and community activist. He owns and runs Cloud Cliff Bakery in Santa Fe, New Mexico. He is active in supporting the re-emergence of native and organic wheat farming and in 1993 helped establish the The Northern New Mexico Organic Wheat Project. Malten directed Cry at the End of the 20th Century, a documentary featuring Amy Goodman, Greg Mello and others, about nuclear weapons and civil disobedience. With the Shipibo Konibo tribe in the rainforest of Peru, Malten directed a movie about a coming of age ceremony for girls, for which Correo Aereo composed the original score and Gene Hackman narrated. He also produced a series of short movies on beekeeping, adobe, algae, solar, and sustainability for Ecoversity TV. Malten has a masters in anthropology from the University of Amsterdam in his native Netherlands. He is a long-term director of Los Alamos Study Group and writes a regular blog called Vortex Politico.