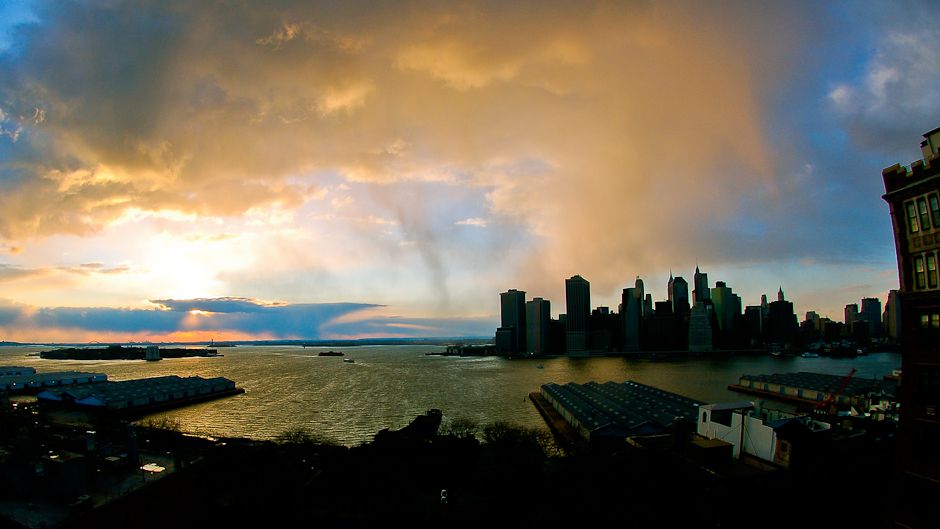 During World War II, a German U-boat made its way into New York Harbour. It fired two torpedoes at a British tanker, splitting the hull in three places and igniting it in flames. The captain and 35 members of his crew burned to death.

Seventy years later, New York Harbour is Lower Manhattan’s first line of defence against another threat: the rising tides of the sea.

New York is situated on three large islands, one peninsula and a collection of smaller islands. In this sense, rising sea levels and increasingly erratic storm surges have rendered it water-bound.

New and re-emerging ideas to improve resiliency have varied in shapes and sizes. They include inflatable subway-tunnel plugs, large storm barriers off the coast, a series of artificial islands, and porous membranes that cling to and protect Manhattan buildings.

“At that time, nobody was really interested in flood risk in New York. Mayor [Michael] Bloomberg was mainly focusing on sustainability issues,” he told IPS. “After Hurricane Irene (in 2011), they said, ‘well, maybe we have to look at other options, like storm surge barriers’.”

Aerts is currently conducting a cost-benefit analysis, weighing the price of constructing storm barriers against the price of upgrading current legislation — such as building regulations, zoning codes and flood insurance. “What we do is we compare both strategies as to how much they reduce flood risks,” he explained.

Asked if storm surge barriers are used in other cities, Aerts cited several in the Netherlands, and the Thames barrier in London. “There’s [also] a large one just being finalised in St. Petersburg in Russia,” he said.

“One condition is that they (remain) navigable, because New York is a port city,” said Aerts, explaining that vertical or rotating floodgates would allow tides and boats to pass unimpeded.

One variation consists of a northern barrier in the East River, coupled with a larger southern barrier that spans from Sandy Hook in New Jersey to Breezy Point in New York. “That one (would) cost 15–16 billion dollars,” he said.

In this case, the Rockaways and parts of New Jersey would receive the brunt of future storm surges, he added.

Stillman said that there exist other strategies, which work to mimic how nature protects landscapes. He cited oyster beds, wetlands, and artificial islands and reefs.

Aerts argued that while there is a need for green projects in the area, he worries it may not be enough to protect the city from future storm surges on par with Hurricane Sandy.

Aerts noted that, nonetheless, the debate surrounding storm surge barriers, along with the time needed for its design and construction, delays the city’s protection against storm surges for a few decades. “Meanwhile, you have to do something else, right?”

He advocated for updating policies and building codes to encourage the construction of more resilient buildings.

Kate Orff, a professor at the Columbia University Graduate School of Architecture, Planning and Preservation, told IPS, “The new frontier in infrastructure is not solely in hard, grey mono-functional infrastructure.

“What I’ve been calling for is a hybrid approach, which integrates some protective hard infrastructures,” she continued. “It’s a big picture look of regenerating the sort of ecological protective infrastructure that we used to have.”

Orff explained, “In many cases, we’ve decimated our inland islands with dredging, or we’ve collapsed our reefs through pollution or through over-harvesting… these are ecological infrastructures that were once in place that have been destroyed.”

One of Orff’s ideas is to nurture an oyster culture in the Bay Ridge Flats. The project, entitled “Oyster-tecture”, includes reefs — of oysters, mussels and eelgrass — that would attenuate waves and filter millions of gallons of New York Harbour water.

Oyster-tecture was inspired by Orff’s roots in Maryland and the Chesapeake Bay, which “has a commitment to marine life and a functioning harbour — a harbour that is very active with boats and people and so on.

“But the key thing,” she said, “is that I’m sort of bringing this into a degraded urban condition, and trying to integrate it into, essentially, a new blue public-space system.”

According to a report by the NYS 2100 Commission — which was convened by Andrew Cuomo, governor of New York, in response to Hurricane Sandy — NYC has lost 80 percent of its tidal wetlands and almost 200,000 acres of its oyster reefs.

Guy Nordenson, a professor of architecture and structural engineering at Princeton University and a member of the NYS 2100 Commission, told IPS, “I think some combination of engineered flood protection, offshore natural barriers, and onshore dunes and natural levees are necessary.”

The report also recommends further research into storm surge barriers, including its ecological effects — on aquatic life, on erosion, and on physical oceanographic conditions.

According to Aerts, people will continue moving into low-lying cities around the world. He estimated an additional one million people in New York City by 2040, even with foreboding storms.

“I don’t know any example of a city that retreated after a major event,” he said, with Hurricane Sandy and Hurricane Katrina (2005) in mind.

Stillman warned, “In a sense, we are in trouble in the greater New York-New Jersey area, because human beings have built homes — frequently expensive second homes… in areas that we are now learning [to be] very precarious in the case of storms.”

Orff, who is also the founding principal of SCAPE — a landscape architecture and urban design office, was slated to present at a Feb. 9 conference entitled “Waterproofing New York City”.

Ironically, the event was postponed when a winter storm covered the Northeast megalopolis in snow and flooded New York’s neighbouring coastlines.

On climate change, Orff told IPS, “We’re already in the mode of adaptation, which is simply assuming that our carbon dioxide emissions will be continuing to move exponentially upwards.

“What’s missing from the conversation is a discussion about carbon — carbon in cities and America’s carbon footprint,” she added.

Orff recalled her own experience during Hurricane Sandy: “I don’t think there’s anything like seeing water lapping at your feet on West End Avenue that provides a wake-up call. I can’t imagine what else could be more dramatic and focusing than water overtaking one of America’s celebrated international cities.”