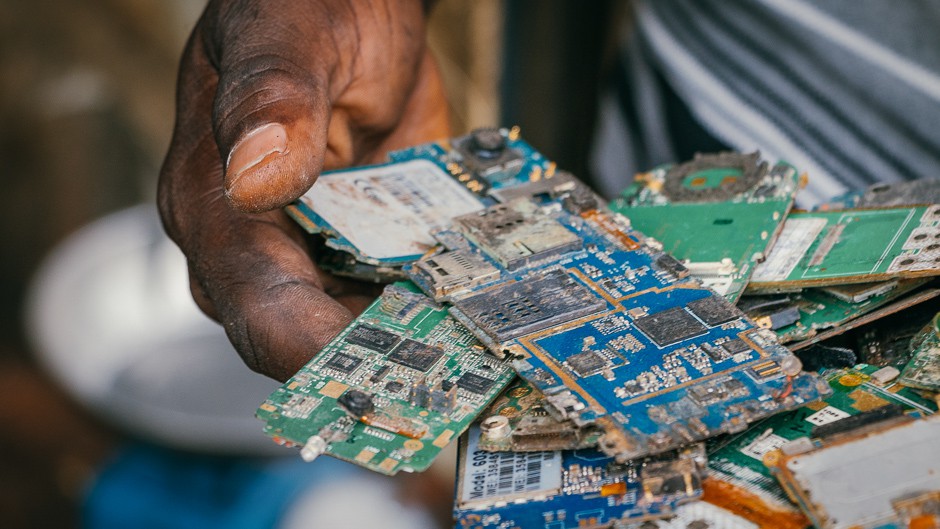 Since the 1990s, electrical and electronic equipment have revolutionized people’s lives. And with ever-increasing technological innovation, the lifetimes of our devices are, on the whole, decreasing. This means that electronic waste — or e-waste — is a fast-growing waste stream.

In fact, in the Global E-waste Monitor 2014 — Quantities, flows and resources (soon to be published by the United Nations University — UNU), Kees Baldé et al predict that e-waste will rise from the 41 million tonnes currently produced each year to 47 million tonnes in 2017. This is a challenge for waste management as many electronic products contain hazardous materials, as well as valuable elements.

It’s well documented that used equipment is also shipped to developing countries for reuse, but much of it still ends up as e-waste. The unsophisticated, informal recycling common in many countries pollutes the environment and puts people’s health at risk.

But now a more complex picture is emerging: since 2013, developing nations and countries in transition have been producing more e-waste than the so-called industrialized world. Latin America, for example, contributed approximately 3.95 million tonnes to the world’s e-waste mountain last year, according to the Global E-waste Monitor.

Innovative models are needed to tackle the problem until developing countries are better equipped to deal with such waste themselves — and one such model is already being developed.

Of the 21 Latin American countries, e-waste regulations are in place only in Argentina, Brazil, Colombia, Costa Rica, Ecuador, Mexico and Peru. But in the absence of a national strategy, most of them only operate at the local level.

Meanwhile, only Brazil, Costa Rica and Mexico have R2-certified facilities, an internationally recognized standard for responsible recycling. This is partly due to limited legal requirements, a lack of awareness of pollution control during recycling and limited training opportunities.

Overall, in much of the developing world there is a lack of systems covering e-waste management through the different stages of collection, pre-processing (to liberate components from the waste) and end-processing (refining and disposing of materials). Often there is insufficient funding to support technology transfer and a sophisticated recycling industry. Establishing modern infrastructure requires substantial technological know-how, large investments in industrial equipment and environmental control measures.

The wide involvement of the informal sector also makes it difficult to establish effective systems to collect e-waste from consumers. Consumers’ low awareness is another barrier.

But there is a way to offer affordable and environmentally friendly recycling for developing countries: through cooperation between local dismantling operations and the global networks of infrastructure that can further refine materials.

This can be achieved through a global ‘reverse supply chain’, where treatment facilities in various locations work together to deliver recycling solutions for different materials and at different treatment stages.

Such a concept has already been developed by the institutions involved in the  Solving the E-waste Problem (StEP) Initiative coordinated by UNU. The concept, called Best-of-2-Worlds (Bo2W), aims to integrate technical and logistical aspects of best practice in advanced, international end-processing facilities.

Dismantling is a highly efficient way to separate materials and components from e-waste and is also economically viable due to low labour costs and little need for equipment. At the same time, fractions such as circuit boards and batteries require high-tech treatment that is usually unavailable in developing countries. Under the Bo2W concept, these would be delivered to global facilities for safe and efficient refining and disposal.

In this way, the initiative connects the best pre-processing already occurring in developing countries (manual dismantling) with the best end-processing (material refinery and disposal) in the global treatment network.

StEP member institutions have conducted several trials to compare the environmental and economic performances of this Bo2W concept with other conventional recycling scenarios. Such scenarios include informal recycling techniques like dismantling and then extracting materials with acid leaching of circuit boards and other extraction methods, as well as direct landfill disposal or mechanical processing such as shredding.

The assessment showed that the Bo2W concept is more economical and environmentally friendly than other solutions. For instance, shredding generates less pure recyclables because materials mix more easily with each other at smaller sizes. By comparison, manual dismantling as part of Bo2W can separate fractions effectively with minimal mixing of materials — and it requires little investment in equipment and labour.

But in the short term, the Bo2W initiative can be a pragmatic solution until developing countries can establish full end-processing facilities. Its implementation should be flexible and adjusted to local conditions. This could, for example, decide the depth of dismantling and what fractions to send to global facilities.

Experiences from pilot projects in China and India have also highlighted societal factors that influence successful implementation. For instance, the model would work well in a relatively small country generating limited amounts of e-waste because the domestic waste stream cannot justify building a full-scale refinery.

To work effectively, Bo2W also requires a well-functioning reporting, registration and tracking system to guarantee the safe movement of fractions between countries. Such cooperation through a global network can also facilitate sharing knowledge on materials and treatment techniques. And, in the long run, it can help establish local refinery facilities in developing countries, when sufficient financing and technology know-how become available.

Rich and Poor Nations Can Link up to Recycle E-waste by Ruediger Kuehr and Feng Wang is licensed under a Creative Commons Attribution 3.0 United States License.
Based on a work at http://www.scidev.net/global/pollution/opinion/rich-poor-nations-link-up-recycle-electronic-waste.html.

Ruediger Kuehr is Head of the United Nations University’s Sustainable Cycles Program (SCYCLES), which focuses on sustainable production, consumption and disposal. He is also Executive Secretary of the Solving the E-Waste Problem (StEP) Initiative, which develops environmentally safe solutions to the global e-waste problem through analysis, planning and pilot-projects.

Dr. Feng Wang is a Research Associate with the UNU Institute for the Advanced Study of Sustainabilty’s (UNU-IAS) Solving the E-waste Problem (StEP) initiative. He works with the StEP “Best of 2 Worlds” project to research manual dismantling as a key e-waste pre-processing approach in emerging economies. As part of the UNU-IAS Sustainable Cycles (SCYCLE) unit Dr. Feng is working on various e-waste topics mainly focusing on e-waste management in developing countries such as China. Since 2010 he has been working with StEP to evaluate the methods and models for quantifying global e-waste generation. Currently, Feng is also participating in a Dutch research project that is mapping and assessing e-waste flows in the Netherlands.