Riding Towards Sustainable Development, on Bamboo 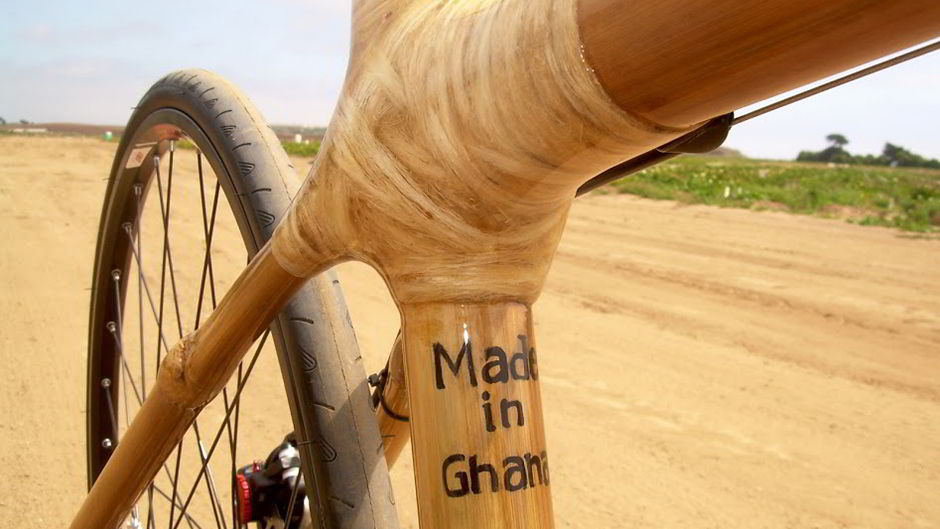 In Ghana, a country burgeoning with traffic congestion, increasing economic growth, and a stark urban-rural divide, making frames of bicycles out of bamboo could be the key to promoting sustainable development. It also makes stronger, longer-lasting bikes.

This is according to Bernice Dapaah, the executive director of Bamboo Bikes Initiative, which trains young Ghanaians to build, fix, and market bamboo-framed bicycles.

“We are into women, children, and youth’s empowerment. And the project reduces carbon emissions and contributes to traffic decongestion, so using it is also a form of reducing climate change,” she said in an interview with IPS.

Bamboo Bikes works in partnership with Ibrahim Djan Nyampong, the owner of Africa Items Co Ltd in Accra, and the frames are sold abroad for 350 dollars each. They cost nearly 200 dollars to build, and Nyampong — also Bamboo Bikes’ technical advisor — pays the young apprentices an additional 30 dollars per frame for their labour.

Nyampong described some of the technical advantages that bamboo frames hold over their carbon fibre or metal counterparts.

“It lasts longer than the metal frame,” he said. “You know a bamboo bike doesn’t break — it’s very durable.”

He said a control test run in Germany proved bamboo frames to be 10 times lighter than metal frames, and noted their heavy load-bearing capacity. Indeed bamboo’s tensile strength — meaning the maximum stress it can withstand while being stretched — is much higher than that of steel. Bamboo is fibrous, and therefore shock-absorbent. It naturally dampens vibrations, so the frames do not require steel or titanium springs.

“The bamboo has also been treated against splitting and termites, so it’s very strong,” Nyampong explained.

He said the bamboo is treated for three to six months before being used for production. It is then coated in a clear lacquer to protect it against rain and other damage. These elements have enhanced the frames’ international marketability, and BambooRide, an Austrian company, has begun importing them for sale in Europe.

“At first, we were developing the frames together with (Nyampong), because they were good, but they had to fit a certain European standard,” said Matthias Schmidt, BambooRide’s sales manager.

“So it was like a partnership, a knowledge transfer in both directions,” he told IPS.

The Austrian importers also provided Nyampong’s team with new equipment, including their first jig, to improve precision and reduce the margin of error.

Now, the Austrian company imports up to 10 frames per month, and Schmidt said he looks forward to the initiative’s continued expansion.

“Their capacity is limited… and in the case that we need more frames… we’ll need other sources. So we’re supporting Dapaah’s efforts to improve the equipment and technology,” he said.

Using bamboo rather than metal to build bicycle frames also holds several advantages for producers — and for the environment. According to Dapaah, bamboo’s availability as a local material not only enables producers to avoid expensive import costs, but also eliminates the carbon emissions that would arise from the transport of imported materials into the country. Bamboo is also organic and recyclable, and, unlike metal materials, does not require high levels of energy during extraction and manufacturing.

“The bamboo bicycle is environmentally friendly… because we are also fighting against climate change,” explained Dapaah.

She said the initiative also commits to ecological sustainability by working with bamboo farmers in rural communities to harvest new bamboo crops, and conserve already existent ones.

“If we cut one bamboo, we make sure to plant at least three or five more,” she said.

According to Isaac Osei, the regional director for Ghana’s Environmental Protection Agency, this is important.

“The traffic situation in the country in general is increasing, and when traffic increases it has its associated environmental issues,” he told IPS.

There are 30 motor vehicles for every 1,000 people in Ghana, and the Driver and Vehicle Licensing Authority registers hundreds more each day. Data suggests that vehicle ownership will continue to rise, as the country hits record levels of GDP growth per capita. Ghana has the largest GDP per capita in West Africa at 402.3 dollars in 2011.

Osei noted some of the harmful impacts of increased vehicle use, including carbon dioxide emissions and pollution from dust particles on dirt roads.

“To actually educate people to use bicycles rather than vehicles, I think it is good for the country and the world as a whole,” he said.

By employing and providing young people with technical skills, the initiative is designed to reduce unemployment and, consequently, rural poverty.

“So far I’ve trained about 10 boys,” Nyampong said. “They can build the bikes, but it’s not up to the quality control level, so we are still training them.”

In addition, Bamboo Bikes will help graduated trainees establish their own workshops, and begin to train more young people.

In 2009, Bamboo Bikes won the Clinton Global Initiative Award, and in 2010, the United Nations Environment Programme Seed Initiative award. It also garnered international attention in June when it received a World Business and Development Award at the 2012 Earth Summit in Rio de Janeiro.