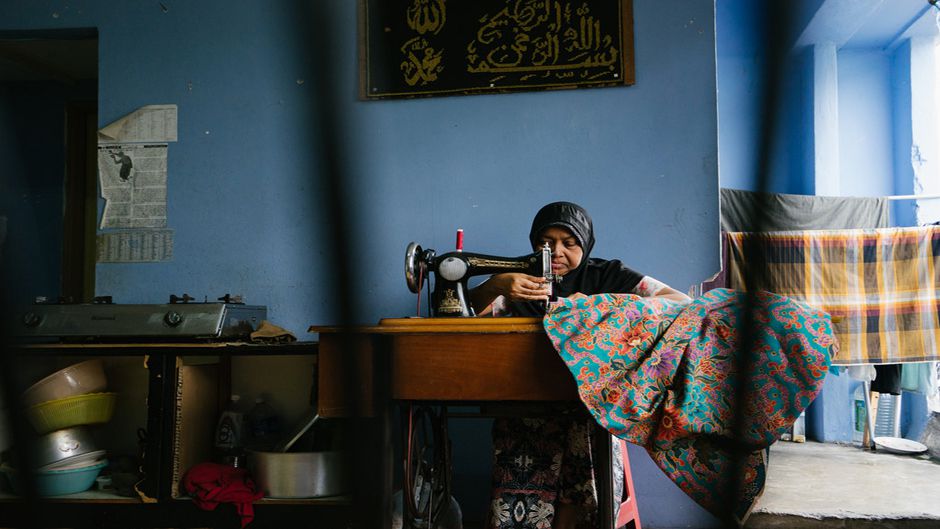 As recognition grew that international migration is a global phenomenon growing in scope, complexity and impact, in 2013 the United Nations convened a High-level Dialogue on International Migration and Development. There, Member States unanimously adopted a declaration that calls for the respect of human rights and international labour standards, reiterates the commitment to fight human trafficking and strongly condemns manifestations of racism and intolerance.

The declaration recognizes that human mobility is a key factor for sustainable development. It calls for facilitation of safe, orderly and responsible mobility through well-managed migration policies. Protection of the rights of all migrants, regardless of their migration status is stressed, particularly drawing attention to the vulnerability of women and children.

Such commitments are a matter of urgency for too many people in the world. According to the United Nations High Commissioner for Refugees (UNHCR), approximately 94,000 refugees and migrants have departed by boat from the Bay of Bengal since 2014. Using the service of smugglers as a last resort, many Rohingya refugees and migrants from Myanmar embark on long and difficult journeys to one of their most popularly preferred destinations — Malaysia. 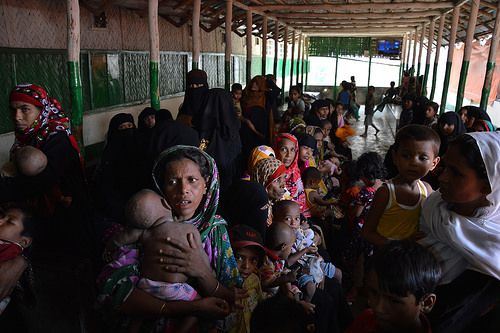 The Rohingya people are an ethno-religious minority group from  Mynamar’s Rakhine State. They have close linguistic and cultural affinity with the Chittagonian people in southern Bangladesh bordering Myanmar, and follow the teachings of Islam. A process that began in 1962 when the military government took power has left the Rohingya suffering State-led abuses and discriminatory treatment due to progressively discriminatory policies that restrict their freedom and basic human rights. The Myanmar Government has referred to the Rohingya as ‘Bengali’, claiming that they are migrants from Bangladesh and thus justifying how they were stripped of their Myanmar nationality via a 1982 Citizenship Law. According to UNHCR, at least 800,000 Rohingyas in Rakhine State are presently stateless.

After an outbreak of deadly violence between Rakhine Buddhists and Rohingya Muslims in 2012, more than 120,000 Rohingya were driven into overcrowded settlements and government camps, and more followed after other clashes since. According to UN’s Office for the Coordination of Humanitarian Affairs, over 416,000 people remain in need of relief, including 140,000 displaced people living in dire conditions in camps and many others without citizenship in isolated villages.

Until a few years back, the Rohingya refugees and migrants who departed Myanmar by sea had been predominantly male. Stripped of their nationality and legal rights related to land ownership, mobility, marriage, access to health, education and employment, many Rohingya men had no choice but to embark on precarious overland and sea journeys in search of alternative places to settle, hoping to find new homes for the families they left behind.

Halfway through these boat journeys, people are often stranded either at sea or in jungle camps on the Thai/Malaysian border when smugglers demand fees of US $1,200–2,000 to continue to the final destination. Graves discovered near abandoned smugglers’ camps in border states such as Songkhla, Thailand, and Perils, Malaysia, suggest the fate of those who failed to make their payments. According to official sources, the authorities of both Thailand and Malaysia unearthed some 180 graves in the month of May 2015 alone. The Office of the National Human Rights Commission of Thailand informed me during an interview that only male bodies were discovered in the graves on Thai territory.

Since 2012, however, more Rohingya women and girls have been joining the boat journeys, fleeing from intensified mass violence and increased risk of sexual violence targeting Muslim communities in Rakhine state. The Arakan project, an independent NGO that works to improve the status of the Rohingya population in Myanmar, estimates that 5 to 15% of the Rohingya engaging in sea journeys presently are women and children. However, no bodies of women and children were found in the graves on Thai Territory. So, where have they gone?

The media occasionally reports incidents where the smuggling of Rohingyas ends up with Rohingya men being sold for forced labour in the fishery and plantation industries in Thailand. Smugglers opt to do this to make up for the financial loss caused when Rohingya individuals fail to make payments for their journeys. Further tempting these smugglers/traffickers is that the demand for labourers has been increasing in recent years as Thais are becoming less willing to engage in labour intensive jobs that are dangerous and dirty. Nowadays, business owners of fishing companies and agricultural plantations such as rubber are willing to pay from 20,000 baht (US$560) to 100,000 baht (US$2,800) in order to secure labour for their business, according to local sources.

Human rights advocates lending support for Rohingya refugees and migrants have recently noticed a new trend. Girls as young as 13 are traveling alone on the boats, claiming the purpose of their journey is to be reunited with their unseen husbands in Malaysia. A recent study conducted by K. Haldorsen for UNHCR, entitled “Child Marriage Among Rohingya Refugees in Malaysia”, reveals intriguing insights on this trend. Marriage match-making in this context appears at first glance to be a win-win situation for both parties. A marriage proposal from a Rohingya man based in Malaysia is welcomed by a girl’s family in Rakhine state where risk and fear of sexual violence against Rohingya girls and women is a growing reality. (For men, bride price, or Mahr, for girls based in Myanmar is cheaper than those already based in Malaysia.) The comparative advantage that they are already based in Malaysia and assumed to be settled in the country with some employment gives these grooms-to-be an upper hand in negotiation. As the result, girls under 18 years old marrying men in their 20s, 30s or even older is not an uncommon picture.

While we learned from discussions with a Rohingya community leader and activists that relatives and male family members already settled outside of Myanmar commonly act as an intermediate for marriage proposals, the media also reports that human trafficking for forced marriage is an increasingly thriving business. Due to the exodus of Rohingya males that occurred during the last decades, demand from outside of Myanmar for Rohingya women and girls has become high. Women can be tricked by traffickers’ false promises that, because they are Muslim countries, life prospects will be better in Malaysia or Indonesia only to end up being held in captivity unless they pay ransom of an amount that is simply not affordable for many. Rohingya women and girls are often left with no choice but to accept a marriage offer by a total stranger or meet threats of being sold into prostitution in Thailand.

Interviews with local activists in Thailand further reveal that some girls are impregnated as a result of being raped during their boat journeys. There are also reports of Rohingya girls and women suffering sexual assaults at smugglers’ camps on the Thai/Malaysian border. Rohingya women and girls are often referred to as “lambs” in such human trade and girls are sold as brides for 50,000 baht (US$1,400) to Rohingya men in Malaysia. In some cases, local Thai men who are attracted by Rohingya girls’ exotic features purchase them to keep them as their mistresses.

Tricked by traffickers’ false promises, Rohingya women can find themselves held in captivity unless they pay ransom of an amount that is simply not affordable.

Evidence clearly suggests that there is an immediate need to address human rights challenges faced by Rohingya people on the move, particularly those of Rohingya women and girls. However, it is evident that not enough is known about Rohingya women refugees and migrants. Information on the status of Rohingya women and girls — in both the long-staying population who settled in countries such as Thailand and Malaysia since the 1960s and those who are recent arrivals to diaspora communities — is extremely limited. Lack of understanding about the needs of Rohingya refugee and migrant women prevents design and implementation of more focused and effective interventions. 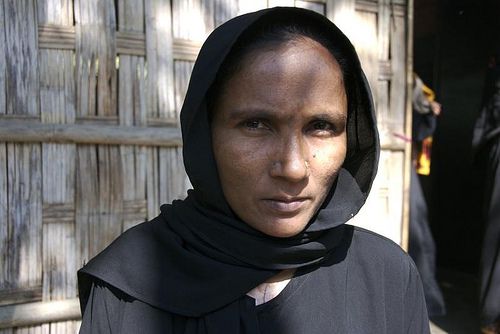 Knowledge building on Rohingya women is further challenged when service providers lending support to Rohingya refugees and migrants in Thailand and Malaysia are predominantly men. At present, there is only one women’s rights group substantially engaged in Rohingya women’s issues in Thailand while some women’s migration NGOs also deal with general Rohingya issues in Malaysia. Likewise, pro-Rohingya groups are commonly guided by male leadership. There are no independent self-help groups organized by Rohingya women themselves to advocate for their needs and rights in a collective way while some individual Rohingya women are active in helping out newly arrived fellow women in an informal manner. Because they are stateless and undocumented, Rohingya refugees and migrants have to lay low to avoid unwanted attention, and many Rohingya women keep their voices lower just to survive day-to-day.

Opening a channel for the silenced voices of Rohingya women and girls takes more than handouts of basic necessities and food items and short-term shelter. Exploring ways to create economic and political opportunities for and with Rohingya women may be one viable way to initiate real dialogues with them. Actors in women’s movements in Asia offer rich experience in this respect and they have showcased innovative ways to overcome discrimination and carve out new social space for women suffering the worst form of gender oppression in the past. Given their assets, they are well positioned to take on complex challenges faced by Rohingya refugee and migrant women and the world is waiting to see how that may unfold.

Yu Kojima is an Expert on Migration Women and Mobility Asia for the United Nations University Institute on Globalization, Culture and Mobility (UNU-GCM) in Barcelona, Spain. As a gender, migration and development specialist, Dr. Kojima offers expertise drawn from combination of experience in both academic and policy research while she brings in development programme management and planning experience earned through working with several UN agencies including UNDP, UNIFEM and UNICEF-Innocenti Research Cenre. She is also a member of Regional Gender Specialist Group hosted by UNICEF in Asia.