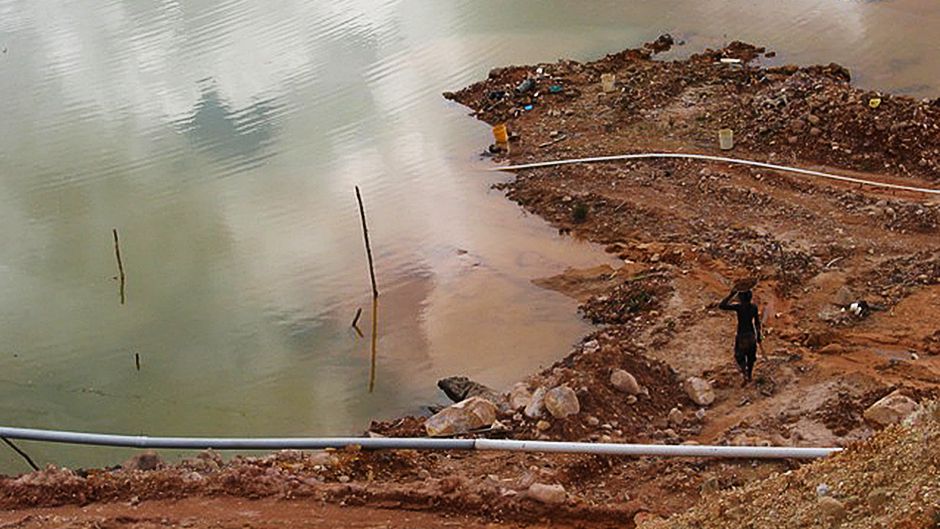 Now he and other villagers from the Chi Chi District in western Guyana near Venezuela won’t dare drink or bathe in water from the river nearest their tribal Indian community because of the chemical pollution and sedimentation from river and land dredges that local miners and Brazilians are operating in the area.

They, like other tribal communities in the South American nation’s booming “gold bush” sector, are today forced to walk long distances to inland creeks they believe are less polluted to obtain potable drinking water, as traditional sources are laced with sedimentation and mercury tailings from high-technology dredges as well as high-powered pumps and hoses stripping away mud or ore to recover gold.

“It is getting really bad in Chi Chi,” the 39-year-old father of two said of the river pollution Sunday as he relaxed at a government-funded native Amerindian hostel in the city, transacting business in the capital before returning to the district later this week.

“Sometimes we make sure that we catch enough rainwater to use or we would have to search out the creeks for water clean enough to drink,” he said, recalling the days when nearby rivers were dark but clear and free of sediment as mining activities were not as ramped up as they are today.

He said the wildlife has also disappeared because of equipment noise, dirty waterways and the exponential increase in human activity, as gold prices had earlier this year threatened to reach US$2,000 per troy ounce.

Investors have been turning up from as far away as Australia, South Africa, the United States, Brazil and Canada in particular to cash in on the gold rush in this former British colony of 730,000 people.

Runaway world prices for gold have pushed Guyana’s gold sector to easily leapfrog sugar, rice and bauxite atop the economic totem pole, with investors turning up from as far away as Australia, South Africa, the United States, Brazil and Canada in particular to cash in on the gold rush in this former British colony of 730,000 people.

Officials estimate that the Caribbean trade bloc headquarters nation has so far attracted investments worth more than a billion dollars in recent years, and this will shoot upwards significantly in the next two years when Toronto-Canada-based Guyana Goldfields opens its mega mine in the Cuyuni District, also near Venezuela.

At least four other companies, most of them Canadian, are close to making similar major intentional mining announcements in the coming months, all banking on the premise that world prices will remain lucrative in the near term.

Early indications are that the mine could produce more than seven million troy ounces of gold or more than twice the amount Canada-based Cambior Inc. produced when it ran Omai mines in western Guyana for 12 years up to 2005. Back then, it was one of the largest operating in South America.

Officials like Joseph Singh, a retired army chief of staff and now chairman of the Geology and Mines Commission, admit that the booming sector now presents regulatory agencies with major administrative and other challenges, as they struggle to enforce regulations, hire enough trained jungle mines inspectors, qualified geologists and other personnel to keep pace, and generally maintain order in a sector that it is tough to regulate because most of its activities are centred in the faraway Amazonian rainforest.

The mines commission is now opening offices in the jungle in an effort to bring regulators nearer goldfields and ensure the environment isn’t damaged permanently.

He said the commission is prepared and has taken swift action to issue “cease work orders” once reports about transgressions reach the city.

“We act swiftly on reports of any transgressions, be it from our own mines officers or even pilots flying overhead and spotting river pollution. Yes, we are facing serious challenges,” he said.

Jean La Rose, head of the umbrella Amerindian People’s Association (APA), said her association had for weeks been asking for an audience with President Donald Ramotar to outline a long list of complaints about the negative effects of mining, including a stark increase in prostitution, drug and human trafficking, pollution, the inability of Amerindians to consume fish and other marine life and even river mouths being blocked by heavy sedimentation.

As an indication of some of the problems authorities are now forced to confront, interior police investigated nearly 50 bush murders last year, about 40 more than normal, many from fights over gold and women, or from drunken rum sprees by miners on time off.

A long list of complaints about the negative effects of mining includes a stark increase in prostitution, drug and human trafficking, pollution, the inability of Amerindians to consume fish and other marine life and even river mouths being blocked by heavy sedimentation.

Indications are that this year’s murder rate will surpass last year given current trends, including the murder of a 16-year-old mining camp prostitute in the interior last week, at the end of a love triangle gone awry.

Sensing they are losing the battle, the natural resources ministry risked aggravating Guyana’s friendly but powerful neighbour Brazil by recently deporting nearly 100 Brazilians working without documentation, while penalising locals for a slew of transgressions including improper record keeping and mining on river banks.

Officials estimate that Guyana is host to nearly 15,000 Brazilians, many of them illegal miners, chased out by the military from the Venezuelan jungle in the 1990s and pushed southeast to Guyana and neighbouring Suriname where they have settled, invested heavily and provide major regulatory headaches for authorities.

In the southwestern Potaro Region near Brazil, miners have in the past two years twice excavated the main road and uprooted underground state water main pipes while looking for gold, stranding residents on both sides of large craters and cutting off water supplies. Officials seized equipment and warned of prosecution.

Along with the other problems, the mines commission and police say they are forced to cope with a massive smuggling ring to neighbouring Suriname that Natural Resources Minister Robert Persaud says accounts for up to half of the estimated 600,000-plus ounces of gold that small- and medium-scale miners produce annually.

Talks are now ongoing with Surinamese authorities for them to raise the royalty taxes to match Guyana’s seven percent to eliminate smuggling, as royalties are currently less than two percent, handing smugglers a hefty profit once they successfully make the 20-minute boat ride across the border Corentyne River.

If that is not enough, a recent World Wildlife Fund study showed significant mercury pollution in the blood of shopkeepers in the jungle who exchange freshly mined gold from miners for rations, and in dozens of jewellers tested, indicating that safety standards are lightly enforced and largely ignored.