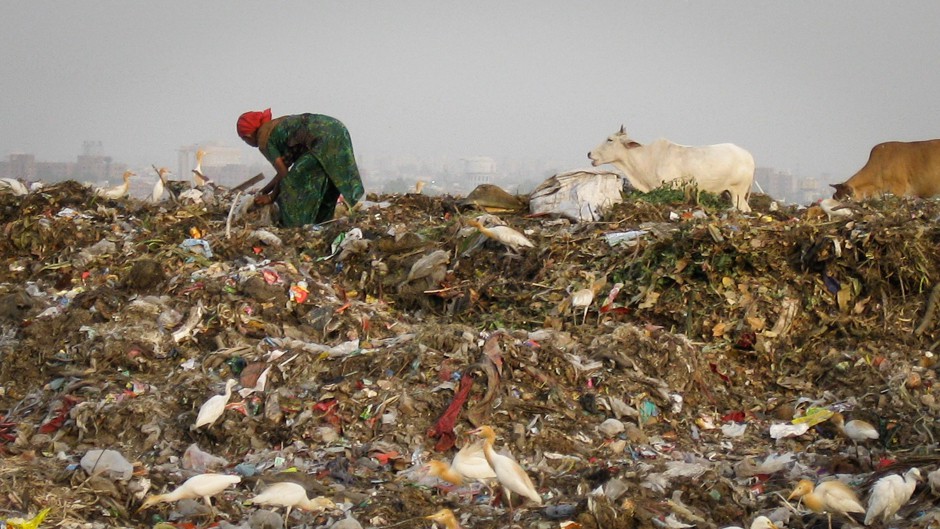 Scavenging from the waste stream, or waste picking, is an important economic activity that provides an income to over 15 million people worldwide and has an financial impact of several billion US$ every year. One percent of the urban population in developing countries makes a living from scavenging.  It is one of our oldest economic activities.

Solid waste, also known as garbage, refuse, trash or rubbish, is a fact of life. By simply living, everyone produces waste. The amount generated and the materials contained in trash vary widely from country to country, and change over time.

During most of human history, disposing of waste was not a problem. Before the industrial revolution, wastes were mostly organic: food and kitchen leftovers. These would rot and become part of the soil. People used organic matter to fertilize agricultural fields, thus recycling the nutrients. That was a form of scavenging.

Though metals have been recycled for at least 5,000 years, industrialization and urbanization brought dramatic changes to waste generation and waste disposal became a problem.

Though metals have been recycled for at least 5,000 years, industrialization and urbanization brought dramatic changes to waste generation and waste disposal became a problem. Creating products through industrial activities requires a wide variety of inputs — such as metals, glass, textiles and rubber — and in turn generates large amounts of waste.

The concentration of industry and people in cities meant that wastes accumulated in small areas and needed to be collected and transported outside the cities. The invention of plastics brought significant benefits to consumers, but also created problems because it can take thousands of years for plastics to decompose. Some plastics can be recovered and recycled, but others cannot. In fact, according to specialists, some types of plastics (such as soda bottles) will hang around forever.

Another disturbing problem is that of the dangerous trash that modern electronics pose, as much is improperly disposed.  Global e-waste generation is growing by about 40 million tons a year, according to a recently released UNEP/UNU report (PDF) and, unless action is stepped up to properly collect and recycle these materials, many developing countries face the spectre of hazardous e-waste mountains with serious consequences for the environment and public health.

The richer the person the more garbage he or she tends to produce. Production and consumption activities in developed countries in general generate more wastes than in developing countries, but the latter are catching up fast. In fact, China is now the world’s largest generator of waste, surpassing the United States.

There are three basic ways to deal with waste: i) it can be dumped on vacant land; ii) it can be processed, such as by incineration or recycling; or, iii) it can be sent to facilities specifically designed for wastes, known as sanitary landfills.

In developed countries, municipalities — or private operators contracted by the municipalities — collect, transport and dispose of the waste generated locally. Residents likely sort materials into recyclable and non-recyclable, and sometimes into more categories of materials. One impressive example is that of the Japanese village of Kamikatsu in Japan where recycling is divided up into 34 categories. Developed countries can collect and dispose safely of 100% of the waste generated by their populations.

But most African, Asian, or Latin American slums lack waste collection. Some cities collect less than half of the wastes generated by their inhabitants. Uncollected wastes accumulate on the streets, vacant land, or are dumped into bodies of water. Many people simply burn their garbage. These practices pollute the air, land and water, as well as causing diseases.

The main obstacle to providing everyone with adequate waste management is its cost. Cities in developing countries are growing fast, and most lack the resources to provide waste services to all.

So what can be done to improve waste management in developing countries? For several years I have advocated the inclusion of scavengers into formal waste management programs.  Scavenging is a common income-generating activity for disadvantaged individuals. Millions of people worldwide survive by recovering recyclable materials from waste. Traditionally, waste pickers have been considered a problem and municipalities have tried to get rid of them.  Scavenging is still illegal in many cities of Africa, Asia, and Latin America.

Waste pickers have daily contact with waste so they can be smelly and have a raggedly appearance. Many of them are illiterate or have minimal schooling. Not surprisingly, the rest of society usually looks down on them. But a closer analysis of waste picking activities demonstrates that scavengers do make positive contributions to society. And with proper support, their contributions can be greater.

What’s more is that recycling saves energy and reduces pollution. Materials recovered by scavengers have already been processed. This processing required energy, water and other resources. If materials are not recycled, that embedded energy and work is squandered. Producing aluminium from bauxite requires a lot of energy, while recovering it from waste and melting it to make other aluminium products saves as much as 97% of energy. Electricity generation is one of the largest emitters of greenhouse gases. If everything else remains the same, recycling reduces emissions of greenhouse gases.

In Jakarta, scavenging activities recover, for recycling purposes, about a third of the total amount of wastes generated by the city.

Recovering organic matter from waste can also reduce greenhouse gas emissions. When organic waste is sent to landfills, it gets buried under layers of garbage. In time, all oxygen is consumed, and the decomposition of organic matter in the absence of oxygen generates methane. Methane is about 22 times more potent in trapping the sun’s heat than carbon dioxide (CO2). Organic matter can then be recovered and turned into compost, which can be used as a soil conditioner in horticulture, agriculture and in landscaping. When done properly, composting does not generate methane.

A good example of this can be found in Bangladesh through the important work of Waste Concern. Founded in 1995, Waste Concern has been supporting community-based composting projects that employ former waste scavengers.

Another benefit from waste picking is that it reinforces the local economy — industries in developing countries prefer to use materials recovered by scavengers because they are cheaper than virgin raw materials. (For one example, see this Our World article about a Balinese company making purses, wallets and totes from reused plastic shopping bags.)

For some materials the difference in price is dramatic: in Mexico, wood pulp to make paper is seven times more expensive than waste paper recovered by scavengers. The cheaper price of recyclables and the energy savings lower a business’s operating costs. Building factories that recycle materials is also cheaper than building those that use virgin raw materials.

The fact that recycling activities reduce the amount of wastes that must be collected and sent to disposal sites in turn has advantages for local governments. This extends the life of landfills and saves municipalities money on labor, equipment and fuel costs. In Jakarta, Indonesia, scavenging activities recover, for recycling purposes, about a third of the total amount of wastes generated by the city.

The merits of scavenging extend even to the national level, as the recovery of recyclables can reduce imports and increase exports thus helping a country’s economy. Over the past decade, the international trade in recyclables has boomed and created global supply chains in which scavengers from Asia, Africa and Latin America supply recovered materials to Chinese factories, where they are recycled into new consumer products.

Finally, and importantly, a growing number of cases demonstrate that scavenger micro-enterprises, cooperatives and public-private partnerships can reduce poverty among waste pickers, and improve their working and living conditions, while generating economic, social and environmental benefits.

In short, waste-picking can be a perfect example of sustainable development.

For more on this topic please take a look at my 2007 book, entitled The World’s Scavengers: Salvaging for Sustainable Consumption and Production.