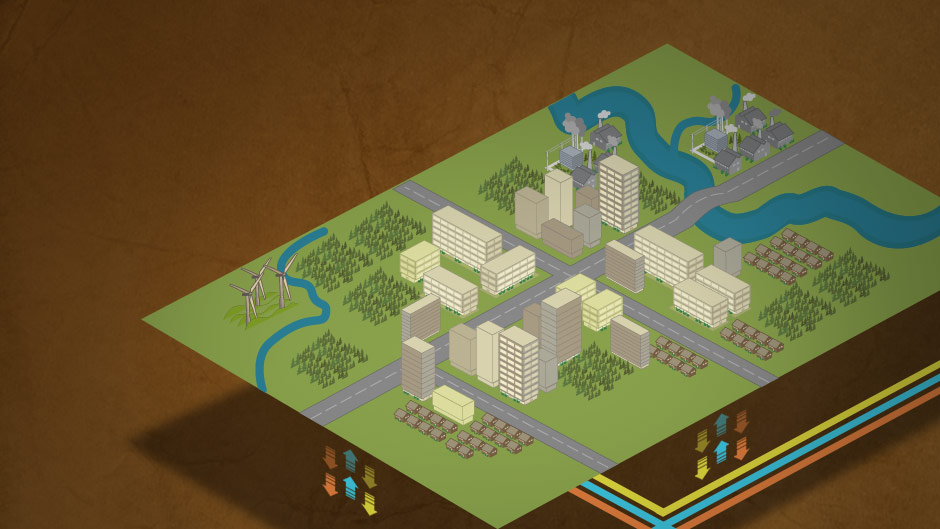 A groundbreaking project is currently being implemented on the Hönggerberg Campus of renowned Swiss Federal Technical Institute, ETH Zurich. In the future, waste heat from buildings on the Science City Campus will be stored in the earth during the summer through 800 ground probes.

The same heat in a “refined” form will be reused for heating in winter. The manufacturers are convinced that the new energy concept will revolutionise the running costs of buildings in Switzerland.

Construction began in June behind the chemistry building on the Science City Campus, but below ground for once, not above ground. The first two ground heat storage fields for a sustainable heat supply network on the campus are currently being constructed here and under the new Life Science Platform building in the northeastern part of the campus.

There are 100 ground probes (200 metre-long plastic pipes) at the chemistry building and 130 behind another of the campus’s buildings. The pipes are sunk into the ground at five metre intervals, then connected to the building’s supply network. The plan is for 800 of these pipes to be located underneath and alongside the Science City buildings by 2020. Together with other structural measures, these will enable energy to be managed on the campus with almost no CO2 emissions, as stipulated by the ETH Zurich Energy Strategy.

The building work stems from a decision made in 2006 by the then ETH Vice-President for Planning and Logistics, Gerhard Schmitt. In the context of the impending renovation of the central heating system, he decided in favour of a pioneering project. The plan was for low-grade energy, known as anergy, to be stored in the ground via a large ground storage system, and subsequently reused.

Cooling appliances and computer servers, as well as every student and employee, releases heat into their surroundings. In the summer this heat needs to be removed by fans and coolers, otherwise the temperature in the auditoriums and offices would be unbearable.

Up until now, most of this waste heat had been discharged into the surrounding air, thus being lost to further use. In the future, it will be stored in the ground via the storage probes, which will operate like a large heat-exchanger.

Via a circulating water system, the waste heat is put into storage in the cool ground where the temperature ranges from 8 to 18°C. In winter the heat is pumped up again through the same circulation system and used to heat the building. Since the temperature range of 8 to 18°C is insufficient for this, the heat is “upgraded” to 30 to 35°C using several electrically-driven heat pumps. The system is decentralised: each building is equipped with a computer that controls precisely how much heat is needed to heat it. 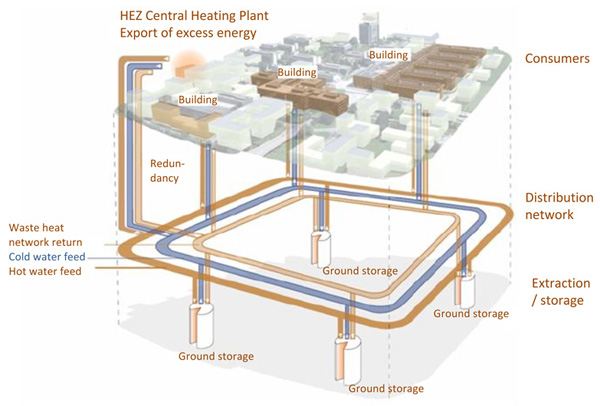 Heat can be tapped off via the water circulation system from each of the storage units, nine of which will be installed by 2020. The target is for only one twelfth of the total energy for heating and cooling to be generated by electricity, i.e., high-value energy (exergy).

The potential is enormous: although the ground’s heat capacity, around 1.0 kJ/kgK, is about one quarter of that of water, the gigantic volume of the ground storage compensates for this disadvantage. The engineers want to make four million cubic metres of ground usable on the Hönggerberg Campus which would yield a total capacity of 13 to 15 gigawatt-hours, corresponding to the energy content of around 1,500 tons of petroleum.

The possibility of heat storage in the subsoil has far-reaching consequences for building design and running costs. Project Manager Thomas Gautschi from engineering consultants Amstein and Walthert Engineering describes it in a nutshell: “Don’t insulate like idiots, network well instead.”

At Science City the main emphasis is no longer on ensuring the thickest possible insulation against heat losses, as in building standards such as Minergie P, for example. Instead, the focus is on delaying the flow of heat and making the excess heat in summer usable for heating in winter.

With enough ground probes, high-efficiency insulation is unnecessary, and may even be counter-productive. In fact, the ground storage can only absorb waste heat in summer if it is “emptied” during the winter; i.e., the earth is cooled back down to its original temperature.

This opens up new prospects for building developers, especially for renovations: by networking buildings they gain more freedom in dealing with the existing building shells. Areas with numerous single buildings in particular such as Science City Campus, have far higher energy-efficiency potential when networked, than as individual structures.

The ground storage system is also financially attractive, according to Hansjürg Leibundgut, Professor of Building Services at ETH Zurich and adviser to the project. Renovation of a medium-sized building façade on the campus would cost about 15 million Swiss francs (US$14,943,000), while a simpler re-glazing to lower heat levels would cost 5 million.

On the other hand, the ground storage currently installed under one of the buildings costs only 1.5 million Swiss francs. Moreover, upgrading the stored waste heat through a heat pump is cheaper than heating oil, and ground storage can hedge against fluctuations in the price of petroleum and, to a certain extent, electricity as well.

“There are many benefits, the system is relatively simple – it is surprising no-one thought of it sooner,” says Gautschi. 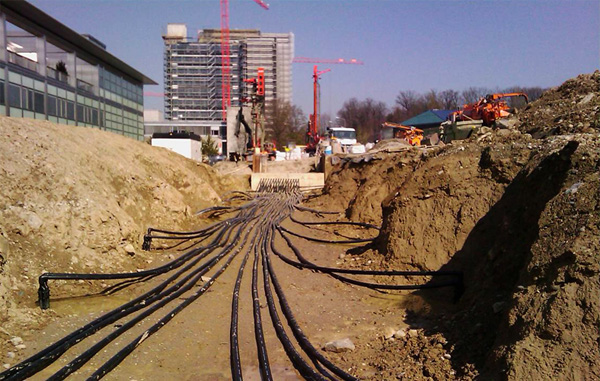 The fact that there is still a lack of years of experience in dealing with ground probe boreholes is certainly one reason. They first came into existence in Switzerland 25 years ago.

However, Leibundgut is convinced that ground storage will become accepted in Switzerland on a large scale in the future.

“One day we will use the whole of Switzerland as a big heat store. A connection to a heat supply through the ground will then be taken for granted just like a connection to the drains or access to transport.”

First of all, however, the system must prove itself. There are, as yet, no reference projects. The plan is for the two heat storage facilities to be connected to the network in mid-2011, followed by all nine storage units totalling 800 probes by 2020.

By then, however, ETH Zurich will probably no longer be the only site relying on heat storage in the ground. In fact, Gautschi is already planning comparable network systems for other clients in Zurich.