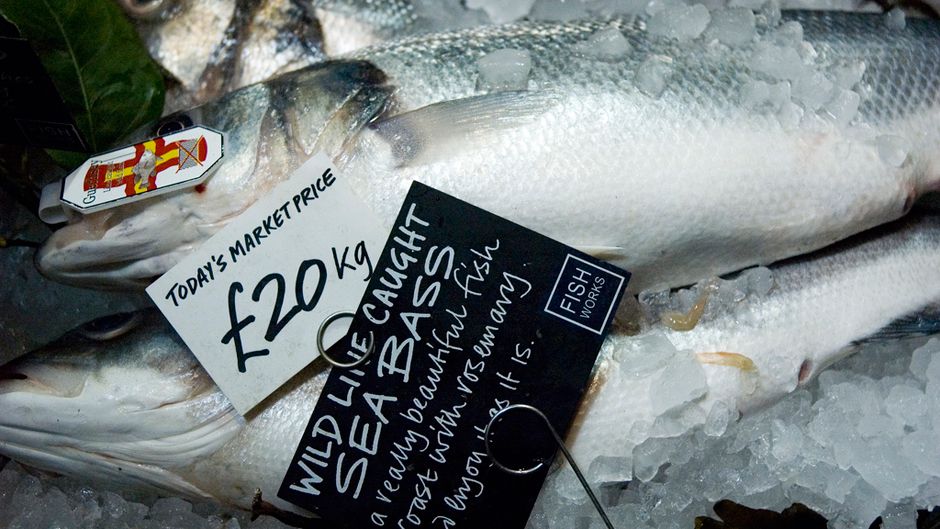 First it was the cod, then the haddock, the swordfish and even the anchovy – now sea bass looks likely to join the list of no-nos for eco-conscious dinner party menus.

Stocks of the palatable species have sunk to their lowest in the past 20 years, according to a new assessment by the International Council for the Exploration of the Seas.

Sea bass – a white fish that can be farmed, and has a pleasant, while not over-powering, flavour and a bone structure that responds well to filleting – has been beloved of chefs and home cooks as warnings have been issued over other species. The firm flesh can withstand strong flavours such as chilli while bringing out subtle fragrances in delicate herbs, and over more than two decades has become a restaurant menu and dinner party staple in the UK.

As a result of the crash in stocks, scientists attending a conference run by the Blue Marine Foundation on Wednesday have urged a severe cut in the permitted catches of sea bass in the European Union. They believe that only by restricting wild catches by at least a third around the British Isles in the next year can stocks be allowed to recover, and they called for similar measures in other European waters.

Lisa Readdy, from the Centre for Environment, Fisheries and Agriculture Science (Cefas), who took part in the ICES assessment, said: “This year’s assessment of the bass stocks shows a declining population, with a drop of more than 20% when compared with previous years.”

Adding bass to the list of fish species at danger is likely to come as a blow to conscientious fish eaters who avoid the most threatened species. Illustration: David Jimenez/UNU.

But the decision on whether to enforce such restrictions on boats, rather than dinner plates, will lie with the Department for Environment, Food and Rural Affairs. It said the numbers of sea bass were “unacceptably low” but that there were no current plans to restrict fishing.

Scientists say the best ways of cutting catches include requiring bigger mesh sizes for nets, that would spare younger and smaller specimens; only allowing the landing of bigger fish; and closing off spawning areas during the spring; or international fishing quotas on bass.

Green campaigners hope that recreational sea fishers will also lobby government to cut commercial catches, as sea bass is still a popular fish for sea anglers. However, there is controversy over the size of fish that anglers can take and when they can be landed. A spring closed season would be unpopular for some leisure fishermen.

Charles Clover, chairman of the Blue Marine Foundation, a conservation charity, said: “The apparent crash in the sea bass population should be of significant concern to both commercial and recreational fishermen, especially as nothing very much appears to be being done about it yet at a government level. We believe that the need to protect older fish until they can spawn reopens the debate about minimum landing sizes that took place in the last decade. This time, both commercial and recreational fishermen need to combine their significant lobbying power to ensure we protect this living resource effectively.”

Reforms to the way in which EU fishing quotas are managed in Brussels will mean that more fish stocks are managed by individual member states, rather than centrally. However, there will still be EU-set restrictions on landings, and fishermen will still have to observe strict limitations on the time they can spend at sea.

Adding bass to the list of fish species at danger is likely to come as a blow to conscientious fish eaters who avoid the most threatened species, which include cod – though recently stocks have shown signs of recovery in the North Sea, further checks will be needed before it can be fully off the danger list – and bottom-dwelling flatfish, as well as skate and dogfish, the latter sometimes known as rock or huss.

On many UK restaurant menus, the origin of sea bass – whether farmed or wild – is not listed, and there is no legal requirement to do so. Farmed fish can have a higher ecological impact than wild fish, owing to the high volume of fishmeal used to feed the farmed fish, and the medicines used to treat farmed fish kept in crowded conditions.