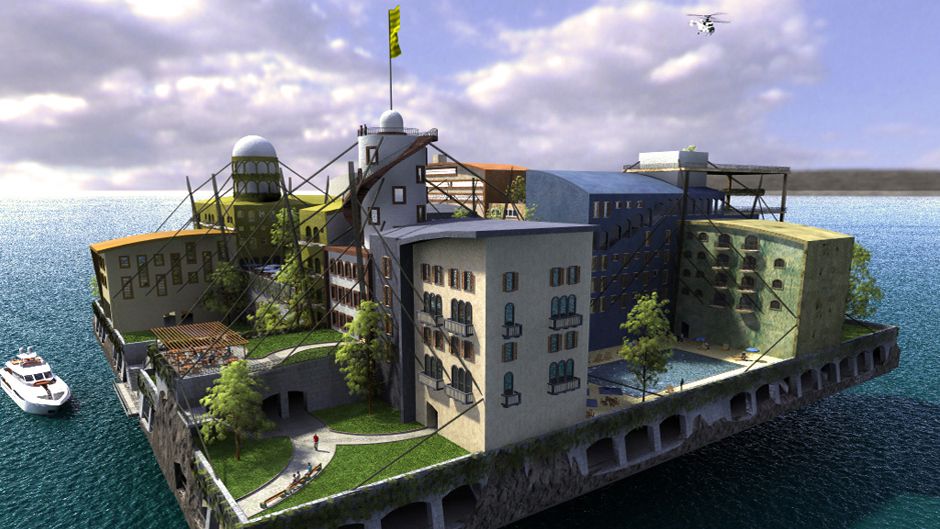 Oceans cover 71 percent of Earth’s surface, yet provide less than 2 percent of the food we eat. The growing demand for seafood, however — predicted to rise to 8 percent during the next decade — from an already depleted and exhausted ocean is forcing agriculturalists and fishers to turn to sea farming.

A recent feature in National Geographic illuminates the issues surrounding a major shift toward aquaculture. For instance, salmon, known to require a large amount of feed when farmed, are seven times more efficient than beef in “feed conversion ratio,” the amount of feed an animal needs to gain a pound of body mass. But the feature also shows how fish farms can produce algal blooms that choke and kill the fish. As we turn to the oceans more and more for food, it will be important to safeguard against “factory farming” of the seas.

The so-called “blue revolution” has proven in recent years that growing fish for human consumption and relieving stress on marine resources is possible. It’s no surprise that communities all over the world are demonstrating the global shift to sustainable and integrative sea farming — from small fishing villages in Bangladesh, where families use fish waste to fertilize rice, to offshore shrimp cages that reduce disease among the shrimp and in surrounding waters in the Gulf of California.

One area where we could soon see this notion taken to the next level is through “seasteading”, where off-the-grid experimentalists are working toward establishing independent city-states in the open ocean. These communities would include aquaculture practices that have the potential to meet humanity’s growing demands for food and energy — making seasteading possibly one of the most important social, political and innovative experiments of this century.

The Seasteading Institute is in the early phases of establishing permanent dwellings in the high seas with new political and social systems. Joe Quirk, the director of communications for the institute, says, “196 national governments do not represent the range of ideas 7 billion people are creating.” An interesting notion to say the least, as we see trust in governments around the world eroding in recent years, maybe no more so than in the US. Quirk describes how floating cities will essentially create platforms for anyone to create their own government start-up, and aquatic nations will have to compete for citizens. Successively, Quirk believes, government will improve as humans are empowered with more governance choices.

Billionaire PayPal founder Peter Thiel invested $1.25 million in seed money to The Seasteading Institute in 2008. He has called the islands an “open frontier for experimenting with new ideas for government,” including a society free of welfare, minimum wages, strict weapons restrictions and rigid building codes.

Quirk is in the process of negotiating with coastal host nations for political autonomy and expects the first floating city to be established in 2020. In turn, the floating city will bring economic and social benefits to the host. “Host countries are most excited about creating blue jobs for local populations,” Quirk says. Over 1,000 people expressed interest in moving to the first floating city in a 2013 survey administered by The Seasteading Institute. From both an economic and political standpoint, the demand for living in a community-driven environment in the open ocean seems to be growing.

Floating cities will essentially create platforms for anyone to create their own government start-up, and aquatic nations will have to compete for citizens. Successively, Quirk believes, government will improve as humans are empowered with more governance choices.

But what about from a sustainability standpoint? How would these floating communities impact the oceans, which are already facing tremendous stress from climate change, resource exhaustion, plastic pollution and oil spills? More specifically, how will these ocean-states be built in a way that is both sustainable and nonthreatening to complex marine ecosystems?

The answer may come down to one unsuspecting plant: kelp, a type of marine algae commonly known as seaweed. Sustainable aquaculture methods that include seaweed allow low-intensity fish feeding while yielding valuable commercial crops. In such a system the seaweed, which captures the sun’s energy through photosynthesis and draws nutrients from the water around it, serves as a staple food source for farmed fish. In the process, the seaweed not only absorbs waste from surrounding environments, it also helps combat a changing climate by absorbing carbon dioxide.

By realizing seaweed’s enormous potential for sustainable food and energy, seasteaders highlight food-producing technologies using seaweed as a staple for floating communities. Biofuels comes into play when seaweed farms are mass-produced and converted into fuel.

Radulovich’s goal is to increase accessibility of food and improved nutrition for the world’s poor, but the idea of seasteading adds another layer: self-sufficiency.

Quirk’s seasteading vision includes ocean cities that cultivate vast seaweed farms, a key to the movement’s sustainability, according to agriculture scientist and senior aquaculture specialist at Seasteading Ricardo Radulovich. Radulovich incorporates aspects of seasteading into his own work by using similar sea farming technology in Costa Rica’s open ocean. Maintaining a focus on developing areas of the world, Radulovich explains how Small Island Developing Nations will be the worst affected by a changing climate, with some disappearing as sea levels rise. “These communities are already short in food production capabilities and freshwater, yet keep on doing business as usual, not growing into the sea as they should,” he says.

Radulovich’s goal is to increase accessibility of food and improved nutrition for the world’s poor, but the idea of seasteading adds another layer: self-sufficiency. According to Radulovich, floating communities must include the following to be truly self-sufficient: food and clean water production and alternative energy. Seaweed plays a critical role in all three. Remarkably, seaweed requires no outside feed, cleans surrounding waters and is able to provide clean energy, all while cultivating larger, more complex ecosystems by providing food and habitat structure for thousands of species.

Whether or not you agree with the out-of-the-box social and political agenda of a new “sovereign nation at sea”, if turned into a reality the seasteading vision may in fact solve our global food and energy crisis. At the very least, it turns our attention to an important question: With a growing human population, what will we do if and when land-based food production becomes insufficient?

Seasteading: The Answer to Sustainably Feeding 9 Billion People? by Shilpi Chhotray is licensed under a Creative Commons Attribution-NoDerivatives 4.0 International License.
Permissions beyond the scope of this license may be available at Ensia.

When Rebuilding a Town is a Vital Option

The Spanish Town Where People Come Before Profit