Seedpods Worth More than Gold in Argentina’s Arid North 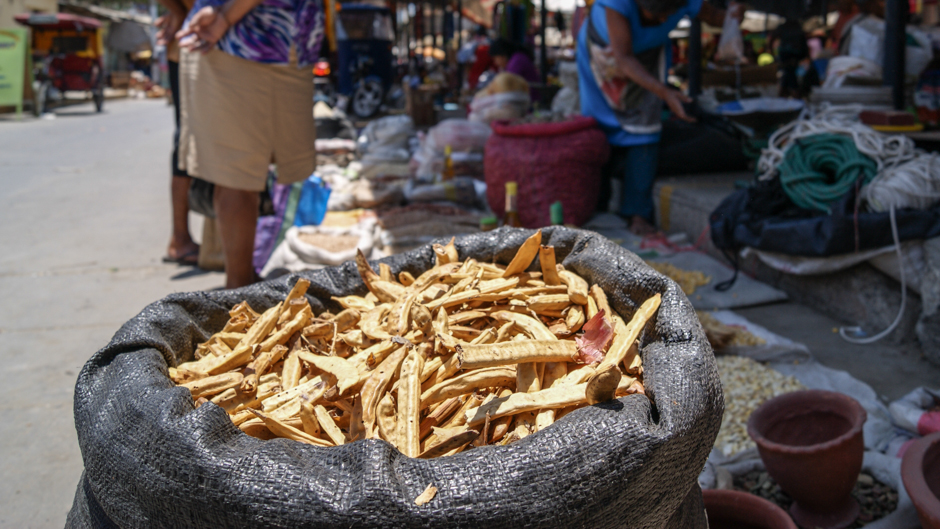 Tired of the drought driving away their men and killing their livestock, the women of Guanaco Sombriana, a town in northern Argentina, have found a new source of income by using the seedpods of native trees that up to now merely provided shade in this arid landscape.

The football pitch is a graphic symbol of this semiarid region in the department of Atamisqui, 120 km south of Santiago del Estero, the capital of the province of the same name.

Two goalposts made of dry branches are set amidst the thin vegetation of cactus plants and low bushes on the white saline soil of this rural district of some 10,000 people.

The empty, unused pitch reflects a bleak reality: the players — husbands, brothers, sons and fathers — have gone off again to find seasonal work, this time harvesting maize and blueberries, in the south of the country.

“I have been left on my own with my seven kids for up to eight months a year,” says Graciela Sauco. “To get by I raised cows, baby goats, baby pigs and chickens. We would sell them, and have something left for our own consumption. But because of this drought we’ve been suffering for the past two years, many animals have died.”

Locals say this is the worst drought they have seen in a decade. There is no money for fodder, and the animals die as the farmers look on, helpless. They are poor, with farms up to 50 hectares in size, passed down through the generations but without legal title deeds.

Nor can they plant squash or maize to feed the livestock, as they used to, because there is no water.

“I would like my sons to have better work, so they wouldn’t have to go so far away. I miss them,” says Sauco, between sobs.

Eleuteria Ledesma says “My last son left today for the maize harvest in Buenos Aires. They live in prefabricated little houses, they suffer from the heat and sleep on cots.”

For the year-end holidays, “they didn’t give them permission to come home” — making things even sadder for the women of Guanaco Sombriana.

But now there is a new feeling of hope in the air.

A decade ago the women organized, setting up the Association of Small Farmers of Salinas Atamisqueñas (APPSA Guanaco), which today groups 80 families in this village of 566 people.

It wasn’t easy at the beginning, says Lastenio Castaño, an extension worker with the agriculture ministry’s Undersecretariat of Family Farming.

“Sometimes there’s no water, not even for people’s consumption, let alone for the livestock or for watering crops,” he says. “The only thing that can be raised here are goats. But even though they are hardy animals, a lot of goats have died in the last few years.”

Nor does the local flora — scrub forest consisting of open, low vegetation — offer many alternatives “for any kind of productive enterprise,” he tells Tierramérica. “There is very little variety of species.”

But the local farmers hope the adobe shed they built will be “a place to store harvested wild fruits and pods as well as grains, to provide balanced feed for their livestock,” Castaño says.

APPSA, with support from the Undersecretariat and from the Unit for Rural Change (UCAR), also has a small mill to produce flour from the seedpods of the ‘algarrobo blanco’ (Prosopis alba), known in English as the Argentine mesquite or white carob tree, and the ‘algarrobo negro’ (Prosopis nigra), the black mesquite or black carob tree — typical native trees that even appear in the Santiago de Estero provincial folk songs.

In the past, the seedpods were only used in Guanaco Sombriana as livestock fodder when times were tough. But the members of the Association took courses on how to produce flour and baked goods using the pods, which are popular now in organic food markets and shops.

The flour is aromatic and sweet, with a taste similar to cacao, and is rich in fibre, protein, phosphorus, potassium, calcium, iron, pectin, tannins and vitamins.

“We used to grind up the pods with a mortar and pestle,” says Lili Farías. “But with the new mill, we can grind up a lot really quickly. Not just the pods, but anything we want to grind, including maize.”

Tierramérica is visiting the APPSA building on a busy day in December, in the middle of harvest season.

A pickup truck full of bags of seedpods pulls up outside the building. The Association now has enough funds to buy harvested pods from other villages.

The women weigh the bags and keep the accounts in a small notebook. Others grind the pods, in a race against time. Temperatures can get up to 50 degrees Celsius at this time of year — the southern hemisphere summer — and the pods can be full of pests, they explain.

To keep their accounts, they use the calculators on their cell phones, “which are only good for this, and for taking pictures, because we have no signal here,” complains Marcela Leguizamón.

Each member of the Association brings a bottle of water from their well. The women are drinking mate — a traditional caffeinated herbal brew that is popular in Argentina, Uruguay and Paraguay — and celebrating the milling of some 2,000 kg of flour.

“This has been a very important step for the Association, which has grown and has become more independent; we now have funds to work with,” says Claudia Rojas. “We used to get by with our member fees, and by holding raffles. Now, with the sales of the flour, we bring in a profit.”

Castaño says they need to improve the distribution and transportation of their products, as well as access to basic services like electricity and piped water.

But APPSA has become an important local interlocutor, bringing grievances and demands to the authorities.

With a revolving fund of around 21,000 dollars for Guanaco Sombriana and other communities, APPSA is able to buy livestock fodder and grant micro-loans for projects like building corrals and digging wells.

The revolving fund is financed by UCAR’s Rural Areas Development Programme, an initiative with national scope aimed at strengthening “social and productive cohesion” among small farming communities, with an emphasis on local and regional economies.

APPSA’s members dream of having computers “to keep records of everything, because papers sometimes get mislaid,” says Leguizamón.

The incomes of local families have begun to improve. The extra money is spent on food, clothing or motorcycles, the mode of transport par excellence in this region, where roads are often impassable.

“We are seeing that young people who usually go off to find work as migrant farmworkers are starting to stay here to work with the harvested pods,” says Farías. “Why go somewhere else to work the land, when they can take advantage of what we have here?”

An estimated 75 percent of Argentina’s territory is drylands, and 40 percent of that portion is showing signs of desertification.

The government wants to extend the project to other regions where the white and black carob trees grow.

A similar initiative is being carried out in San Gerónimo, in the neighbouring department of Loreto.

Teolinda Coronel and her daughter, niece and granddaughter are heading out to the countryside to harvest seedpods at 6:30 AM.

“We bring the thermos and drink mate, and come back at midday,” she says. “By that time each one of us has gathered 35 kg or more.” They head back out at 5:00 PM, when the scorching sun has lost some of its glare.

She hopes her sons will come back. With what they earn as migrant farmworkers, “they can’t even pay their bills”. But with the income from the seedpods, they have been able to buy clothes and shoes, and to help their mothers.

The tour through the areas where the carob pods are almost worth their weight in gold ends at a table with pastries and cakes, washed down with ‘aloja’, a mildly intoxicating beverage made from the pods, and the thick, sweet syrup made from the fruit of the chañar (Geoffroea decorticans), another native tree.

The pods also bring other kinds of benefits that aren’t jotted down in the notebooks.

“I used to be stressed out at home, thinking about how to earn a little money, and now people come to my house to buy my products, and I’ve seen other places and met other people,” says Graciela Ardiles, a farmer from the town of Arraga, who used to bring in some money cleaning other people’s houses.

“Now I have my own independent job. And my kids will be able to get an education, which I wasn’t able to do,” she adds.

This story was originally published by Latin American newspapers that are part of the Tierramérica network.

Fabiana Frayssinet has been a correspondent since 1989 in Central America, and since 1996 in Brazil, where she served as a contributor for various international media outlets in radio, print and television, including CNN en Español, IPS, UNIVISION, Telefé de Argentina, Radio Suecia and Radio Nederland.