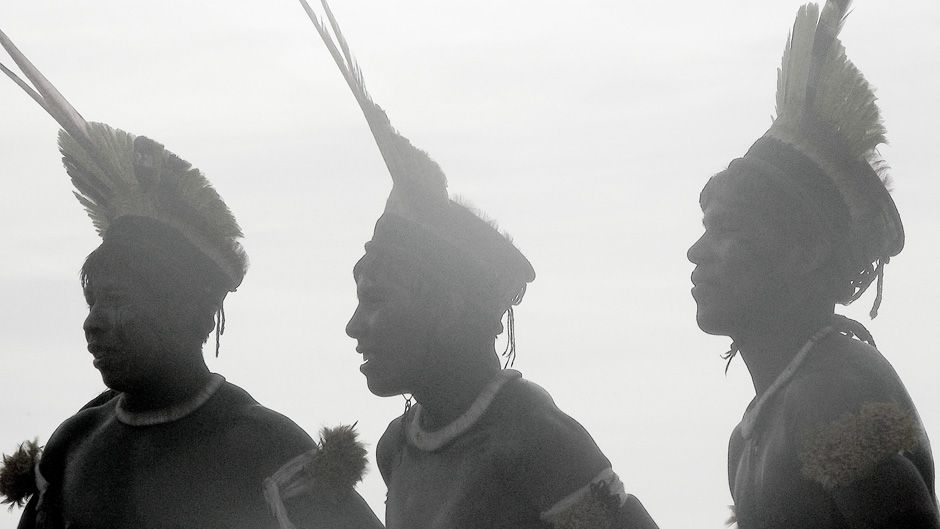 Forests cover over one third of the world’s land surface, or around 4 billion hectares. Abundant in biodiversity, crucial in the ecological services they provide to the planet and its living inhabitants, forests are also attractive in terms of economic potential and natural resources. However, the persistent and widespread degradation of these vital areas poses a direct threat to the rural communities and indigenous peoples who have inhabited and depended on them directly and primarily for centuries and continue to do so.

Forest peoples have, over the centuries, elaborated and practised livelihood systems derived from their natural environment and anchored in traditional knowledge, practices and beliefs. Forest peoples depend primarily and directly on the forest both for subsistence and trade in the form of fishing, hunting, shifting agriculture, the gathering of wild forest products and other activities.

A large number of forest peoples (but by no means all) self-identify as indigenous peoples. The United Nations Declaration on the Rights of Indigenous Peoples, adopted by the UN General Assembly in September 2007, articulates the right to Free, Prior and Informed Consent (FPIC) of indigenous peoples, who have the right to participate in decision-making and to give or withhold their consent to any project that may affect the lands, territories and resources they customarily own, occupy or otherwise use.

Unsustainable activities — such as logging, mining, cattle ranching and industrial plantations (notably of oil palm and soya) — coupled with rampant deforestation and ill-regulated land acquisition (‘land grabbing’) threaten the access to and use of the forest by its customary users. Poor governance of land and natural resources coupled with a dramatic rush since the food/finance/fuel crisis of 2007/2008 to control and invest in land for the production of food and bio-fuel crops are further exacerbating these existing pressures on forests and their inhabitants.

The question remains: how many people around the globe can be considered forest peoples and what is their geographical distribution? Despite a considerable amount of material produced on forest-dependent communities and sustained international advocacy for the protection and recognition of their legal and human rights there is a significant gap in the literature on this important aspect. Statistics available on forest people numbers are more or less educated ‘guesstimates’ and there are no reliable regional or international sources of data on forest dependent people.

In seeking to address this critical gap, Forest Peoples Programme — a UK-based NGO that works directly with forest peoples in South America, Africa, and Asia to help them secure their rights — has published a landmark report “Forest Peoples: Numbers Across the World” that, for the first time, provides estimated figures for indigenous and forest peoples’ populations across continents and in around 100 countries across the globe. Whilst the figures cited are by no means conclusive or authoritative, they serve to raise awareness about the peoples who primarily depend on forests for their livelihoods and to enhance their visibility as key actors and rights-holders in the management and use of forests and forest resources.

Global estimates of forest peoples range from 250 million to over 1 billion, depending on how they are defined. The World Bank estimates that 1.6 billion rural people are dependent upon forests to some extent. World Bank sources also state that around 90% of the 1.2 billion people living in extreme poverty depend substantially on forests for their livelihoods.

The Food and Agriculture Organisation maintains that around 300 to 350 million people are highly dependent on forests and live within or adjacent to dense forests. Estimates for the global population of indigenous peoples range from 300 to 500 million across some ninety countries worldwide, representing around 5% of the world’s population.

The report by Forest Peoples Programme concludes that there are approximately 500 to 560 million indigenous people in the world, while forest peoples make up some 1.3 to 1.4 billion. The lack of available up-to-date data on both these populations suggests that both these figures remain conservative and may in fact be much higher. 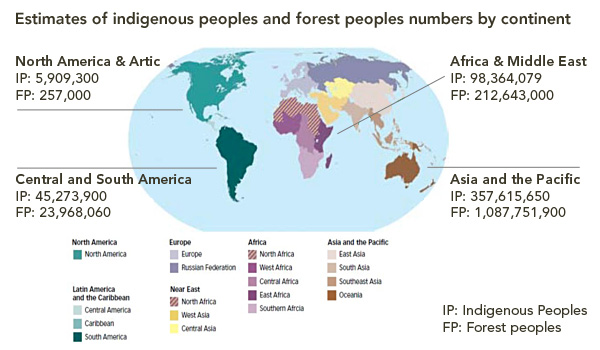 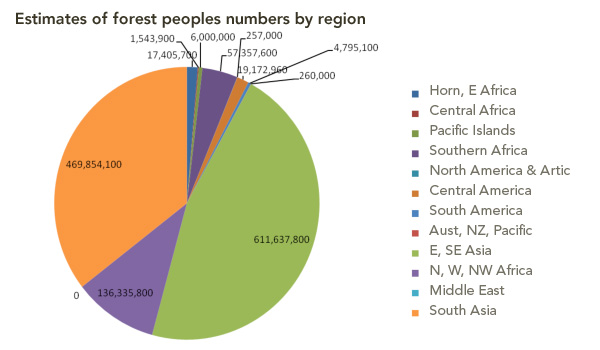 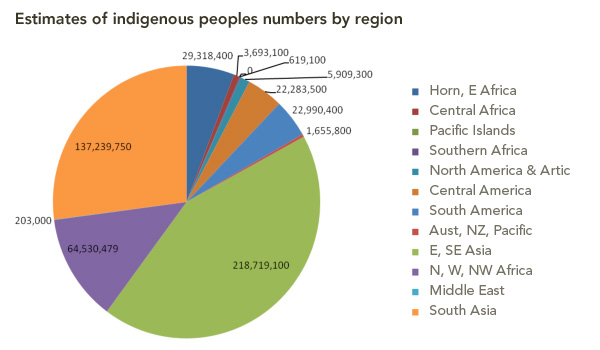 A major finding of the report is that there is a serious lack of accurate and up-to-date data, and that identifying and quantifying on indigenous peoples and forest peoples is a highly complex and politically sensitive issue. Identifying what land counts as forest in the first place is far from straightforward. There exist over 1,500 documented definitions of forests across the world and these derive from the international community, national definitions, and state, provincial or local definitions.

For customary forest dwellers, forests also have a customary and spiritual meaning as a source of livelihood, cultural significance and individual and collective identification. This means that rights and claims to forestland by customary forest dwellers can be subject to interpretation depending on how forests are defined. Forestry laws and jurisdiction often deny local people any rights of residence, ownership and even use of forests or subject them to complicated regulations that impede their access and make them vulnerable to manipulation.

Furthermore, available estimates for populations of indigenous peoples tend to vary widely. There is a universal definition for ‘indigenous peoples’,  although important factors identified include priority in time in the use and occupation of a specific territory; voluntary perpetuation of cultural distinctiveness; self-identification as a distinct collectivity and an experience of subjugation, exclusion or discrimination, whether or not these conditions persist.

In some cases, states do not recognise the category of ‘indigenous peoples’ in their national constitutions or legislation. In others, ‘indigenous peoples’ may be applied restrictively to certain groups and not others, who may also have reason to self-identify according to the elements above. Government statistics do not always differentiate peoples by ethnicity, and where indigenous peoples lack citizenship or inhabit remote and inaccessible regions, they may not be represented in censuses at all. At the same time, certain indigenous peoples (choose to) remain uncontacted, such as certain communities in the Amazon Basin.

Estimates for forest people numbers reflect an even greater variability, depending on the perceived nature and degree of dependency on forests and the proximity of different communities to forests. Some figures represent forest-dwelling populations, which may include non-indigenous populations who have settled on forest land for several generations, and on this basis, also lay claim to forest lands. Estimates may also include employees of the forestry, conservation or agro-industry sectors who have moved into forested areas for paid work. Traditionally, forest-dwelling communities may have been forcefully displaced or evicted from their customary lands.

Forest peoples may refer to people who depend in one way or another on specific forest resources, such as fuel wood, for example. In many cases, these important distinctions are not made clear in available estimates. In light of these definitional challenges, the report draws from a wide variety of sources, including publications from various UN bodies (FAO, ILO, UNEP, ECOSOC), national governments, national and local non-governmental organisations/indigenous peoples’ organisations, human rights and environmental institutions, and regional human rights bodies. In order to demonstrate how widely figures can vary from source to source, the overall numbers of indigenous and forest people provided in the report are presented as means, with reference to upper-bound and lower-bound totals as well.

The protection of forest peoples’ rights

Forest-dependent people in many countries of the global South do not enjoy secure tenure over their customary forests. Their rights to these forests and the natural resources therein are frequently inadequately addressed or protected under existing national legislation. As a result, their forests are vulnerable to private investors and government-led development initiatives, and their capacity to defend and sustain their forests and customary livelihoods in the face of corporate and State interests is seriously compromised. Even seemingly positive land use changes, such as the conversion of forests to national parks or designated conservation areas, can lead to local communities being forcibly evicted or severely restricted in their traditional forest activities.

To make up for the failure of governance in applying international human rights norms and respecting indigenous and forest peoples’ rights, there has been a proliferation of standard-setting in the private sector suggesting how these norms should be respected by investors through voluntary certification schemes requiring third-party verification. Such standards have now been developed for forestry (Forest Stewardship Council), palm oil (Roundtable on Sustainable Palm Oil), soy (Roundtable on Responsible Soy), bio-fuels (Roundtable on Sustainable Biofuels) and carbon sequestration (Climate, Community and Biodiversity Alliance).

However, the main shortcoming of these voluntary schemes is that, being voluntary and business-led, they have not sought to build the capacity of national government agencies to protect the livelihoods of vulnerable communities with weakly recognised rights in land.

A recent encouraging development at the international level is the creation of the Voluntary Guidelines on the Responsible Governance of Tenure of Land, Fisheries and Forests in the Context of National Food Security, approved by UN Member States on 9 March 2012 and endorsed by the Committee on World Food Security on 11 May 2012.

The Voluntary Guidelines, as a form of ‘soft law’ (i.e., non binding), promote secure tenure rights and equitable access to land, fisheries and forests as a means of eradicating hunger and poverty, supporting sustainable development and enhancing the environment.

To conclude, the findings of “Forest Peoples: Numbers Across the World” confirm that “the lack of existing reliable information about forest-dependent peoples, their numbers, livelihoods and circumstances is itself a symptom of their marginalisation in forest policy making”. The report seeks to remedy this gap.

Having a better idea of who forest peoples are and where they live raises awareness of the social dimension of forests and their intrinsic value to communities who have traditionally depended on them, and continue to do so to this day, and whose rights to the forest are being challenged by developments and land use changes carried out without their Free, Prior and Informed Consent.

Seeing the people for the trees by Sophie Chao is licensed under a Creative Commons Attribution-NonCommercial-ShareAlike 3.0 Unported License.