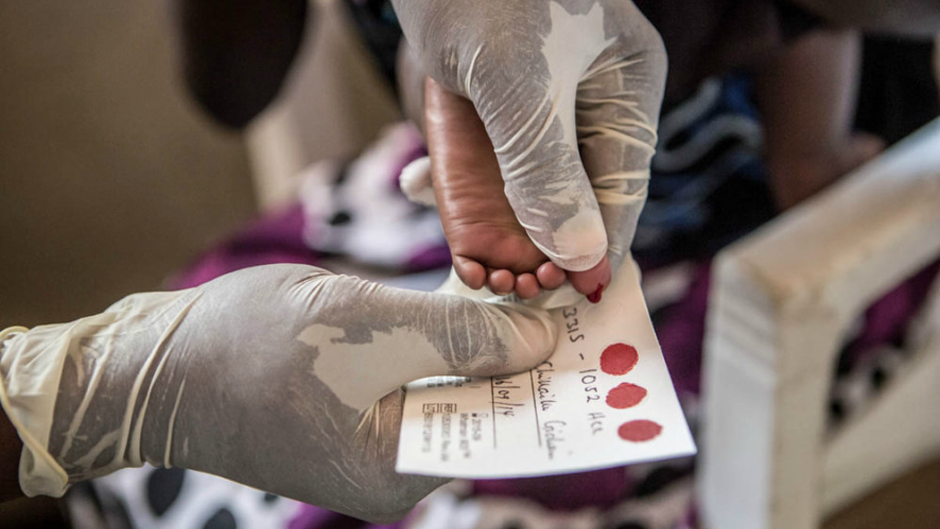 In rural Zambia and Malawi, new mums face long delays finding out if they have passed HIV on to their babies.

“What we found with these rural clinics is that often the test results never came back, whatsoever,” Erica Kochi, of the United Nations Children’s Fund (UNICEF) Innovation Unit in New York, told IPS.

Without treatment, a third of babies born with HIV will die before their first birthday and half before their second. Starting treatment within the first 12 weeks of life vastly improves their chances of survival.

But testing babies is not easy in poor countries.

Because mothers pass antibodies to their babies in the womb, the usual adult antibody tests during the first months of life can be inaccurate.

A virological test is needed. But only a handful of central labs can do these in Zambia and Malawi. On the long journey to and from the lab on the back of a motorbike or truck, the blood sample or the result often gets lost.

Some studies suggest that nearly half of tests never reach the clinics or the mothers.

Meanwhile, the new mum returns to her village and she and the baby likely drop out from the clinic’s radar.

Malawi and Zambia each has an estimated one million people living with HIV. In 2012, new HIV infections among children numbered 9,400 in Zambia and 11,000 in Malawi. Just over one third of babies were tested.

Enter UNICEF Innovation with an open source, code-based RapidSMS software: as soon as the lab result is in, the rural clinic’s nurse receives it by SMS on a cell phone or looks it up on the website. In remote villages, a community health worker receives the SMS and alerts the parents.

All information is encoded to ensure privacy and the software includes a web dashboard for reporting and administration.

In Zambia, the turnaround was cut from two or three months down to one month, said Shadrack Omol, deputy representative of UNICEF in Lusaka.

Starting treatment within the first 12 weeks of life vastly improves a baby’s chances of survival.

The SMS relaying is part of an antenatal system, Project Mwana (KiSwahili for child), that brings other benefits for all new mums as well.

At the first antenatal visit, the mother’s details are entered in Mwana’s SMS reminder system for alerts on checkups, immunizations, baby weighing and drug refills.

Bundling the HIV component with regular mother and baby care helps avoid stigma and fear of being identified as HIV positive.

In 2011, a Mozambican charity with 22,000 people on ARV treatment tried to build a cellphone database to remind patients of appointments: fearing loss of privacy and stigma, only half gave their cellphone numbers.

The next step, says Emanuel Saka, HIV specialist with UNICEF in Malawi, will be “expanding the geographical coverage and scope of the technology” and targeting adolescents with HIV.

The best solution would be to test babies at the point of care in the rural clinic without any delays. In Mozambique, health workers are trying out a new viral load testing machine that can diagnose young babies in less than one hour.

“This is a great breakthrough,” said Bindiya Meggi, a pharmacist working on this project with the National Institute of Health.

Made by the German company ALERE, the machine is being tried in four sites with the help of the Clinton Health Access Initiative.

“It’s very simple to use,” said Ocean Tobaiwa, a Zimbabwean technician at the trial clinic in Maputo

As the machine is tested, it is adapted to local conditions, such as irregular electricity, black outs, power surges, heat and humidity. German technicians visit regularly to tweak the machines.

At present, babies are tested at one-month of age. A dry blood sample is collected through a heel or finger prick and sent to a central lab for viral load analysis.

Mozambique has only four such labs for a population of 24 million, with some 900,000 HIV positive women, and thousands of kilometers of roads impassable in the rainy season.

Although in theory results should be returned in two weeks, the reality is one month or more. Meanwhile, as in Zambia and Malawi, mother and baby are lost to follow-up.

Challenges for testing and treating babies with HIV in Malawi:

A cool way for Zambian teens to learn about HIV

In Zambia, RapidSMS is the backbone of U-Report, a booming HIV hotline service for young people, which garnered 71,000 users in two years.

“Young people much prefer to text than to call up a hotline,” Kochi told IPS.

UNICEF Innovation Labs work with universities and the public and private sector to find new solutions to old problems in health, education, and water and sanitation.

“There is so much to do in the area of technology and real time information that hasn’t yet been explored,” Kochi said.

“My boyfriend says using a condom will give me cancer, is this true?”

Cultural taboos prevent parents from discussing sex with their children. Among 25 youth at a recent meeting in Lusaka, only four had ever talked to their parents about sex.

The questions via RapidSMS keep coming, 600 a day on average, to U-Report, a new HIV counselling service via cell phone for youth in Zambia that boasts 71,000 active users.

U-Report fills in an alarming information gap. Just over one-third of Zambian teenagers aged 15-19 have comprehensive knowledge about HIV, while an estimated 100,000 youth are infected. Many don’t know they carry the virus and are not taking life-saving antiretroviral treatment.

“Young people get infected because they don’t know enough about HIV,” Bright Kaoma, 21, told IPS. Kaoma presents a program on HIV at Panafrican Radio in Lusaka, Zambia’s capital. On a recent Saturday, the program featured a precocious and outspoken pre-teen.

“Conventional HIV packaging is boring,” said Maxwell Simbuna, 12. “Who wants to go to a clinic to learn about HIV? WhatsApp is more fun!”

Cultural taboos prevent parents from discussing sex with their children. Among 25 youth at a recent meeting in Lusaka, only four had ever talked to their parents about sex.

Behind U-Report are the innovation hub Bongo Hive, which developed the software, and UNICEF.

The concept is travelling beyond Zambia, as UNICEF is adapting it to the deadly Ebola epidemic in Liberia.

At the call centre in Lusaka, 23 counsellors work in shifts day and night, and the SMS coming are not only from teens. Lesa says that parents also turn to U-Report to find answers to their children’s questions.

HIV testing among U-Report users is 40 percent, nearly double the national average. When U-Report polls users around youth and HIV topics, it receives around 1,000 SMS daily.

“What I learn at U-Report helps me help others,” said a young man, 21, who did not want to be identified. Seven members of his family live with HIV: his father, two of his four wives and four of their children, aged 27 to 3.

The older siblings have joined U-Report. “For the young ones, I am the intermediary,” he told IPS.

Lyndal Rowlands is an international development writer, researcher and evaluator and a UN Correspondent at Inter Press Service.

How Technology Can Improve Life for 1 Billion Persons with Disabilities