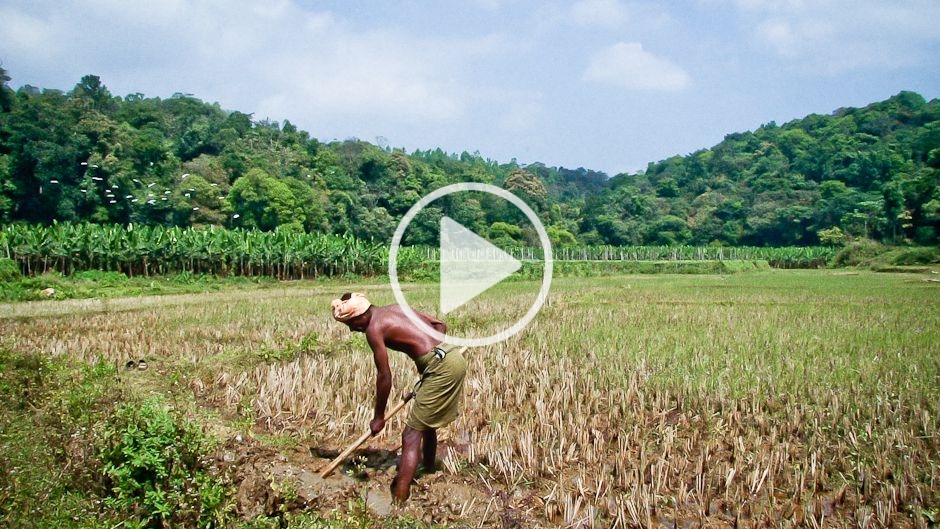 Managing natural resources with conscious respect for the needs of future generations is the basis of sustainable development. The local population in the scenic Wayanad District of the south Indian state of Kerala have long been practising precisely such a way of living in harmony with their natural environment.

Wayanad’s ‘home garden’ system, shown in the video-brief accompanying this article, are an example of the multi-use landscaping that is a focal area of the Satoyama Initiative, an international programme initiated by Japan’s Ministry of the Environment and the United Nations University Institute of Advanced Studies (UNU-IAS). The initiative aims to conserve sustainable types of human-influenced natural environments by promoting a broader global understanding, appreciation and recognition of their value. As part of this effort, UNU-IAS has been conducting and collecting case studies — including the Wayanad home gardens — from around the world.

Set high on a plateau at 700-2,100 metres above sea level in the Western Ghat mountains, Wayanad District is home to a highly fragile landscape characterised by fragmented forests. Typically an agrarian economy, the district also has a distinct social fabric with a large population of indigenous people.

Wayanad falls entirely within Conservation International’s Western Ghats biodiversity hot spot. It is one of the 18 originally proposed by renowned ecologist Norman Myers due to high levels of species endemism. Regrettably, Wayanad’s forests are home to several threatened flora and fauna. Among the various species listed, 55 are critically endangered, 148 are endangered and 129 species are vulnerable, as per International Union for Conservation of Nature’s Red List classification.

A large proportion of Wayanad’s landscape has already been converted to tea and coffee plantations, which has resulted in the severe fragmentation of its forests.

Moreover, a number of crops, currently cultivated extensively, have their wild relatives here. Among spices, the wild cousins of black pepper, cardamom, cinnamon and curcuma are largely found in the wet forests.

A largely montane area that receives high annual rainfall within a short span of three to four months, the land in Wayanad also performs important hydrological and watershed functions.

The rivers originating here are relied upon not only by those who depend upon them for irrigation and domestic consumption, but also impact many more south Indians. Wayanad’s waters drain entirely into the Kabani river, a tributary of the Cauvery, which in turn is the most important river system of south India, affecting the life and culture of people of the three southern states of India. Thus, the soil types and waters of this region help sustain the livelihoods of many people in the state.

The landscapes of Wayanad are a mosaic of forested lands, managed by the state government as reserved forests or wildlife sanctuaries, and agricultural lands adjoining these forested areas. The favourable effect of these mixed landscapes and production systems has been receiving attention recently.

Initiatives like Satoyama have highlighted the fact that traditional farmers have not only conserved biodiversity of great economic, cultural and social value, but also enhanced it through selection and value addition.

Further, the potential of such traditional land use systems to serve as sinks (via soil and biomass) for atmospheric CO2, a theme highlighted in the Kyoto Protocol of 1997, is also garnering interest.

Geographically, Wayanad sits where the Western Ghats and Eastern Ghats converge, bringing together the elements of both systems in once place. The forests in Waynad are unique and ecologically important because they represent a transition zone from the moist Cullenia-dominated forests in the South Western Ghats to the northern drier dipterocarp forests.

However, a large proportion of Wayanad’s landscape has already been converted to tea and coffee plantations, which has resulted in the severe fragmentation of its forests. It is a well known fact that habitat fragmentation leads to biodiversity and ecosystem service losses. Conserving these forests is a big challenge due to this fragmentation and there is the prospect of increasing degradation due to over-exploitation.

In addition to its rich biodiversity, Wayanad is home to diverse social, religious, and linguistic groups. Although the state of their natural environment and the extent of these peoples’ dependence on forests have changed, the tribal populations continue to be fully reliant on natural resources for their survival and any deterioration will have a telling impact on their livelihood.

The net cropped area of the district is 54.6 percent of the geographical area (213,100 ha) and is mainly dominated by cash crops. Out of the total estimated 155,855 holdings in Wayanad, 83 percent belong to either small or marginal farmers, according to state statistics. The major plantation crops of tea, coffee, pepper, coconut, rubber  and areca nut (popular for chewing throughout several Asian countries) together constitute 85 percent of the cropped area. Rice is cultivated in about 8 percent of the cropped land. 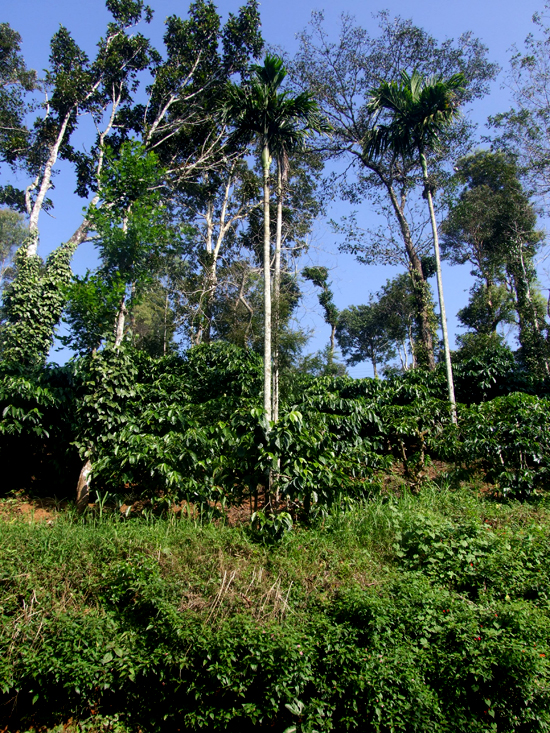 The district of Wayanad is characterised by subsistence homestead farming and small holder plantations. In traditional agroforestry systems, like Wayanad’s home gardens, the native tree composition of the farm land is largely left intact, while only the lower layers plants are replaced by crops.

A typical home garden represents an operational farm unit that integrates trees with field crops, livestock, poultry and/or fish, and has the basic objective of ensuring sustained availability of multiple products for both consumption and sale. Farmers maintain a spectacular variety of plants this way, while also creating a forest-like multi-storey canopy structure somewhat similar to the tropical evergreen forests.

Furthermore, these home gardens prevent the degradation of agricultural lands arising from intensive agriculture and maintain or increase site productivity through nutrient recycling and soil protection. They also complement and supplement farmers by providing raw materials, directly and indirectly, for agricultural use, and by producing food and forage for human and animal consumption.

The system also spreads the need for labour inputs more evenly across the seasons, thus reducing the effects of sharp peaks and troughs in activity, which is characteristic of tropical agriculture. Given that the technology involved in homesteads is simple, farmers require little support from the outside. These home gardens help farm families to utilise family labour and the part-time activity by other members of the household means the landholder is not required to change occupations, nor experience off seasons. Further the diversity of enterprise affords an insurance-like protection in which failure of one crop doesn’t affect the family.

Overall, home gardens form a dominant and promising land use system as they maintain high levels of productivity, stability, sustainability and equitability.

Rich ecosystems for the future

Despite these advantages, home gardens rank quite low in economic indices as the marketable surpluses they produce are quite small. Lower economic returns are forcing many farmers to shrink their home gardens and make the space available for more remunerative mono-crops. Since government policies promote monocultures through subsidies, farmers are prompted to shift to such crops instead of more complex models. Moreover many of the crops produced on homesteads that were important for medicinal, social and cultural reasons have lost their relevance during the last few decades

A large proportion of the poor depend on ecosystem services for their survival. In Wayanad, biodiversity contributes to food security and nutrition, providing the raw materials that underpin the health system (both formal and informal). Yet, continued deterioration of homestead lands will result in changes to the mode of extraction and people’s dependence on forest products.

The area’s home gardens are characterised by an intense mix of trees, and are recognised as one of the closest mimics of natural forests ever created by man.

Many micro and macro level factors — such as policy changes, geographical peculiarities, climate change effects, and poor investment in agriculture and infrastructure — contribute to the troubles, causing Wayanad’s agricultural production and productivity to drop drastically over the years. The large scale agrarian crisis in the region is reflected in the suicide rate among farmers.

Studies (such as this one) reinforce the general fear over the loss of traditional characteristics of home gardens and their gradual demise into cash crop production systems. With modern research emphasising the need for sustainable development practices, the decline in the traditional practice of home gardening by Wayanad’s tribal population can have far-reaching consequences.

Concerted efforts are therefore needed to preserve and understand the dynamics of these complex human dominated landscapes for their conservation and continued maintenance. The challenge is to encourage investment in the home garden model to improve productivity and revenue without undermining biodiversity. A multi-pronged partnership approach that involves governments, NGOs and social entrepreneurs is imperative to sustaining this agricultural system, the failure of which will have intense ramifications not only for the region’s fragile ecosystem but across all sections of society.

Loss of such a model, one of the best mimics of nature that humans have succeeded in creating, would be a set back for humankind.

Stories from a Biodiverse World by A.V. Santhoshkumar and Jiji Joseph is licensed under a Creative Commons Attribution-NonCommercial-ShareAlike 3.0 Unported License.

Dr. Santhoshkumar, A.V. is an Associate Professor at the College of Forestry, Kerala Agricultural University, India. For a considerable part of his career, he was involved in extension activities related to natural resource management among the farmers of the region. His interests include forest ecology and human – nature interactions shaping landscapes. He has been actively pursuing the developmental issues of Wayanad, an ecologically fragile landscape in the state of Kerala. He has also been researching on the impacts of various policies on the nature and natural resources of the region. For his doctoral thesis, he studied the impact of co-management of forests of the region through Joint Forest Management in the state of Kerala.