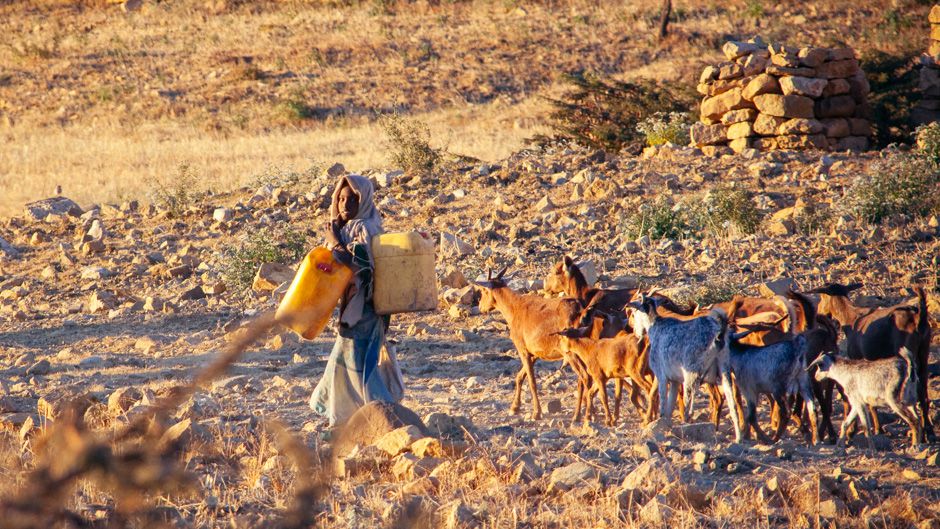 Fasil Giorghis’ office in the centre of Addis Ababa affords a good view of the Ethiopian capital. There are building sites wherever you look: grey concrete structures with protruding armouring irons, sheathed in scaffolding made from eucalyptus trees.

The pressure on cities is enormous. The Ethiopian population has doubled to 91 million people in less than thirty years. It is estimated that up to 1,200 people a day are streaming into Addis Ababa from the countryside. They are hoping for a better life with access to clean drinking water, hospitals and schools.

Although the standard of living in the city of three million people is higher than in rural areas, over half the population here live in self-built huts made from plastic sheets, wooden boards and corrugated iron, with no sanitation or electricity.

“We are at a turning point,” warns Fasil Giorghis. “If we don’t manage to stop the rural depopulation then we’re heading for a catastrophic situation in the cities.”

Concentration of knowledge and infrastructure

Giorghis is one of Ethiopia‘s most respected architects and has written a book on the architectural history of the capital.

“Ethiopia is a rural state. Eighty-three percent of the population here still live in the countryside,” he declares. “We have to offer these people new prospects. We can only do this by changing from a rural to an urban lifestyle.”

By concentrating knowledge and infrastructure in urban centres Giorghis wants to initiate a transformation toward increased prosperity.

Franz Oswald and Marc Angélil, both Professors at ETH Zurich, a leading Swiss university, have the same vision. The NESTown urban development concept devised by Oswald includes the creation of resource-efficient semi-urban centres governed by the farmers themselves to help stem rural depopulation.

The Ethiopian government is now also convinced by this approach: the government’s five-year plan envisages the creation of hundreds of new villages and small towns in rural regions. Oswald is currently planning the first such semi-urban centre, which will act as a model, with Giorghis for the Bura kebele (a kebele is similar to a rural municipality). This development is also seen as a practical research project, as a ‘real-life experiment’ and is being co-financed by the Department of Architecture of the ETH Zurich.

Garden of Eden for a few months

Bura is in northern Ethiopia, 350 kilometres from Addis Ababa as the crow flies. Architect Benjamin Stähli from the next biggest town, Bahir Dar, is coordinating work on the new village centre on behalf of Oswald and Angélil.

On a sunny morning, Stähli is setting off for Bura with his civil engineer Teklehaimanot Daniel. They want to see how things are progressing. The 90-minute drive takes us past teff, maize, wheat and rice fields. It is hard to imagine that a devastating famine ravaged this country in the 1980s.

“In the Amhara Region we have a higher average annual rainfall than Zurich —93 millimetres per month,” explains Stähli.

“But that all falls in three to four months.” In six months, the area will be unrecognisable: the fields brown and yellow, the ground cracked from the drought, most streams dried up. Farmers have to lead their cows, donkeys and goats for miles to the last remaining sources of water.

Stähli makes a hard right off the road onto a stony bit of grassland. There is no village to be seen, just scattered tukuls, the traditional round huts, made from eucalyptus logs and mud with roofs of knotted dried grass. Families live here with up to seven children on an average of 15 square metres, without running water or electricity.

The Bura kebele is home to a total of 722 men, women and children scattered over 1.6 square kilometres. Practically the whole community lives off the land. A rough stone path, which was created by the regional authority, leads to where “Buranest” is currently starting to take shape: a grassed area the size of a football field.

A little river behind it forms a natural border with the existing settlement. Workers are using a powerful digger to excavate the riverbed. The dammed pool this is creating will protect the settlement from flooding during the rainy season and can be used by the inhabitants‘ livestock as a watering hole in the dry months.

As soon as the rainy season is over, workers from the kebele will lay the foundations for the first “Rainwater Unit”. This is what Stähli and his colleagues call the architectural unit from which they want to build a village. It acts as an expandable living space and water collector — the v-shaped corrugated roof collects the rainwater and feeds it into four 20,000-litre containers. These will supply the inhabitants with drinking water, water for cooking, washing and watering their gardens. Cisterns are planned for the overflow during the rainy season, which will be tapped in the dry months to irrigate the lower lying fields.

The roof of the unit will lie on a bearing structure made from eucalyptus logs that will be anchored in the natural stone foundation.

“At the start of the project we looked for materials that are available cheaply and locally, that are suitable for stable construction and that would be accepted by the farmers,” says Stähli.

Walls are incorporated into the structure with mud from the surrounding area, strengthened with straw and finally slaked with lime. A unit, which will provide a living space of up to 90 square metres each for four families, will cost around US$22,000. The future inhabitants build and maintain the structure for their new home, supported by training and a central school that teaches them the skills they will need.

From farmers to semi-urban dwellers

Stähli is convinced that the biggest challenge of Buranest is not in the technical realisation, but rather in initiating a new lifestyle. “Concentrated housing requires trust within a community. This was lost during the terror of the Derg regime in the 1970s and 1980s.”

However, Stähli has high hopes for the younger generation, who are more open to new ways of life. Young Aboset Adane sees Buranest above all as an opportunity to create new jobs for the boys in the village and wants to help with construction of the first unit himself. And the shy Fentahun Denie hopes that the women in the new community will be better protected from sexual attacks.

Stähli warns: “An Amhara would never tell you to your face that he doesn’t like the project. There are a hundred ways to say no in this culture.”

But he believes that most village inhabitants have now recognised the opportunity of Buranest. Now the local authorities just have to be convinced by the project and get on board. This is no simple task, as there is a lack of capacity, qualified experts and materials and the bureaucracy often hinders fast decisions.

This is why Stähli is campaigning with the local decision-makers for this project to get the authorities on board. In Addis Zemen, a few kilometres from Bura, he is dropping in unannounced this afternoon on Ato Tessalin, the “canton clerk” of the woreda administration (a woreda is an administrative division comprising a number of wards).

After a lengthy assurance that he doesn’t want to take up Tessalin’s valuable time for too long, Stähli ensures that the new road has been registered and that Tessalin’s people are starting with the planting for the tree nursery, which is being co-financed by a Swiss non-governmental orgainsation.

He also wants Tessalin to commit to a date for the presentation of the latest plans. Stähli knows that he will have to broach the subject again. However, nothing can dampen his euphoria over the project: He charges out of the office and says to Daniel, his colleague: “We’re building a completely new village! Don’t we just have the best job in the world?”