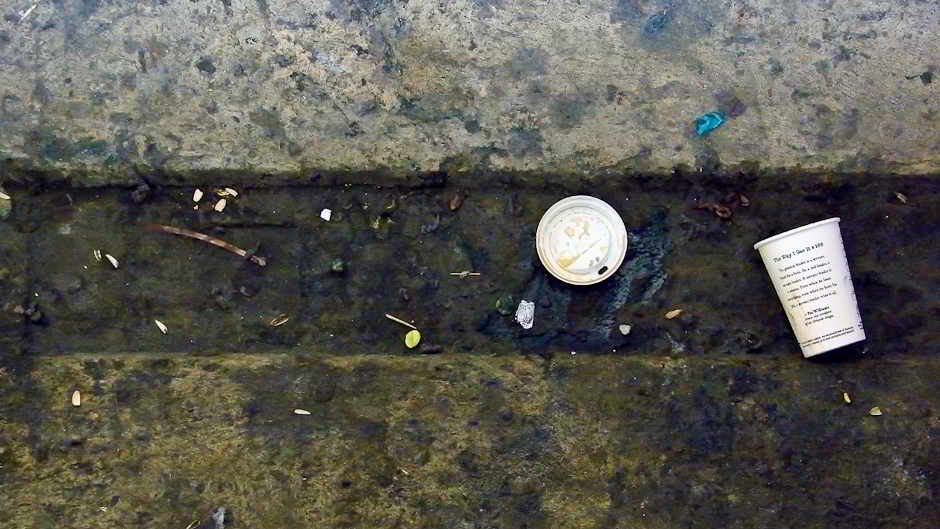 The bean counters at the World Wildlife Fund found that it takes more than 200 litres of water just to produce one cup of latte coffee (see video below).

Water wastage is only one aspect of the total environmental impact. Another alarming facet is the amount of solid waste produced by the ubiquitous throwaway paper cup — the most unnecessary environmental side effect of the coffee craving.

This is known, by the environmentally astute, as the “paper cup problem”.

Every day many of us decide to take our coffee away in a paper cup. It is easy to imagine the environmental consequence of this decision — billions of cups, millions of trees and tons of greenhouse gases (estimates vary) every year.

The word “paper” might suggest that the paper cup is easily recycled and that it is not as bad as its plastic cousin. However, most paper cups are coated with a plastic resin (i.e., polyethylene) for durability and convenience, therefore making both their composting and recycling uncommon and raising the specter of carcinogenic chemical leeching.

According to one study on the environmental impacts of paper cups, each cup, taking into account the paper, the paper sleeve, production and shipping, emits about 0.11 kilograms of CO2.

Depending on forestry practices (and whether they are sustainable or not) paper cup production results in loss of trees, ecosystem degradation and a reduction in the planet’s carbon absorption capacity.

In our world of shrinking forests and growing landfill, continued use of the paper cup is both redundant and unsustainable.

Changing the way we think about coffee

Every aspect of the coffee industry has been a prominent target of environmental and social justice campaigners who seek to inform people about the impacts that their daily habits have on other parts of the world.

Awareness campaigns encouraging people to drink fair-trade coffee have reached mainstream usage, even in some instances through the most vilified of coffee chains.

Interestingly, bioplastics, derived from corn, sugar cane and other renewable biomass resources, are emerging as a clever way to reduce our coffee footprints.

Corn-based plastic (polylactic acid — PLA) coffee mugs in particular have been gaining popularity with drinkers. One example we know about is Micup (let us know about others).

They can help reduce coffee-related waste, reduce dependence on carbon-based inputs, such as oil, and can be disposed of in closed loop recycling programs — that is, programs that convert waste to make other products.

Admittedly there is a small carbon footprint from reusable bioplastic mugs through their production and also from rinsing in hot water. Furthermore, unsolved problems, including the fact that recycling plants may not yet be equipped to handle PLA, are contributing to consumer confusion.

Nonetheless, one reusable mug is obviously a better option than dozens if not hundreds of disposable cups.

Drinking your coffee in the shop is the best thing you can do… the coffee just seems to taste better!

Realistically, significant reduction in the impacts of paper cup consumption requires solutions that fit the current lifestyles and habits of coffee drinkers.

Reusable and recyclable cups are the future for all on-the-go coffee aficionados. It’s certainly an issue people want to talk about, as the 1200 + blogs about paper cups and the lack of convenient alternatives can attest.

One problem with alternatives, such as flasks and thermoses, is that many mugs do not fit under the spout of different coffee machines used in retail outlets and cafés. But surely that can’t be too difficult to find a work around for.

Additionally, in order to maintain market share, some retail outlets make it harder than it needs to be for customers to use other brands of bring-your-own coffee mugs. But as demand increases the clever coffee makers will soon realize that they have to change.

Attempts by retailers to enforce brand loyalty can stifle people’s desire to bring their own cup and have prevented larger scale environmental mitigation from taking effect to date.

The time is ripe for patrons to shun the paper version and insist instead on wielding a smart and reusable vessel. This way coffee drinkers can lead change themselves, rather than waiting for it to happen.

So what are you waiting for?

Sad Demise of the Paper Coffee Cup by Raj Raghavan is licensed under a Creative Commons Attribution-NonCommercial-ShareAlike 3.0 Unported License.
Based on a work at http://ourworld.unu.edu/en/storm-in-a-paper-cup/.

Raj Raghavan is a project manager with experience in the IT sector currently working with indigenous communities in Australia on community development projects.

He believes that individuals and communities can solve their own problems through their own creativity and hard work, and is passionate about sharing those stories to inspire others to drive social and environmental change.