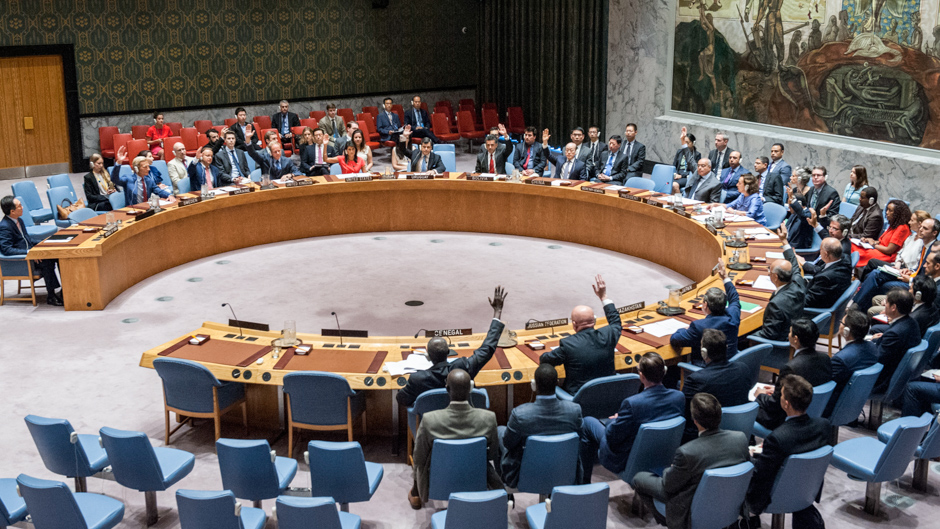 The UN Security Council adopts resolution 2371 (2017) on non-proliferation of nuclear weapons and the intercontinental balistic missile programme by the Democratic People's Republic of Korea while strengthening sanctions against the member state. Photo: UN Photo/Kim Haughton

Last Thursday, the United Nations Security Council held a briefing on “Enhancing the effectiveness of United Nations sanctions.” It was the first briefing of its kind since November 2015. Egypt, which took up the Council Presidency this August, organised the briefing in the context of ongoing negotiations over a draft resolution on various enhancements to this UN Charter Chapter VII tool. As Council members revisit the issue of sanctions’ purpose, design, effectiveness, and impact, it is time to take a fresh look at how this tool could be further strengthened.

Second, sanctions should be tailored to specific and frequently shifting conflict situations. Yet keeping sanctions current requires both political will, as mentioned above, and the right expertise and country knowledge support for sanctions designers. The panels of experts charged with monitoring the effects of sanctions measures and making recommendations for needed adjustments must be composed of the highest caliber of arms, finance, and regional experts. The contractual status and benefits offered to the experts, as well as the risks they face, can make it challenging to first recruit and then retain such expertise.

The same actors who call for sanctions can be quick to blame them for little effect or unintended outcomes.

Third, Council-mandated sanctions, in any shape or form, do not matter if neighboring states keep supplying the individuals, group or regime targeted by sanctions with money, arms, mercenaries or trading opportunities. The application of UN sanctions has almost always followed the application of regional sanctions or a request by regional states to apply sanctions. Yet the same actors who call for sanctions can be quick to blame them for little effect or unintended outcomes. For this tool to have the best chance at success neighboring states must comply. If the front lines are weak, sanctions’ potential to act as a deterrent diminishes significantly.

Fourth, a better use of existing incentives as well as a more concerted matching of capacity assistance with states in need would go a long way towards increasing compliance. While the Security Council designs sanctions, all 193 member states are responsible for implementing them. Current implementation rates vary by regime, but overall they are quite low. Security Council members have the ability to punish non-compliance by placing “secondary sanctions” on states that fail to comply. But this “stick” has been too rarely used, despite its demonstrated effectiveness; according to the widely-used Targeted Sanctions Consortium database the application of secondary sanctions in the cases of Somalia/Eritrea and Sierra Leone/Liberia significantly increased the effectiveness of achieving the regimes’ stated objectives.

The very legitimacy of sanctions depends not only on their effectiveness, but also on minimising collateral impacts.

Conversely, the Security Council could mandate the UN Secretariat to further support front line states through needs assessments, capacity building and awareness raising. In addition, Article 50 of the UN Charter gives Member States the right to consult the Security Council on compensation for undue hardships incurred following good faith attempts to implement UN sanctions. Yet Council members have used neither the carrots of assistance and compensation nor the stick of secondary sanctions sufficiently. Underuse has contributed to poor implementation rates, with, at times, even members of the Council failing in their obligations.

Finally, sanctions designers should also better anticipate and then seek to mitigate collateral effects of even targeted sanctions. Council members, in their efforts to combat urgent threats to peace and security, seem to be slipping back towards a blunter sanctions design, as demonstrated through the growing scope of the current non-proliferation and counter-terrorism regimes. The very legitimacy of sanctions depends not only on their effectiveness, but also on minimising collateral impacts. The Security Council should thus more systematically mandate sanctions experts to monitor and report back on the unintended effects of its measures.

As Council members debate the content of the draft resolution on sanctions, it is likely that few of these points will survive the politically fraught horse trading over language. But these recommendations may still prove useful as benchmarks against which we can evaluate the final product and as a road map for advocating enhancements to this tool in the future.

Dr Rebecca Brubaker is Senior Policy Adviser at the United Nations University Centre for Policy Research in New York, focusing on Security Council affairs, multi-lateralism, sanctions, mediation, migration, refugees, and humanitarianism. An expert on UN sanctions, Dr Brubaker served as an adviser on cross-cutting policy issues through the 2014 High Level Review of UN Sanctions and as a co-coordinator of the UN Inter-Agency Working Group on Sanctions. She co-authored the Inter-Agency Working Group’s inputs to the 2014 High Level Review of UN Sanctions as well as various reports relating to the design, implementation and adjustment of this coercive tool.

Prior to joining the United Nations, Dr Brubaker served as a scholar and visiting lecturer on international affairs, post-conflict studies, and refugee and migration policy at the University of Oxford, Yale University, University of Virginia, the Free University of Brussels (ULB), and the Graduate Institute of International and Development Studies (Geneva). Her doctoral research centred on the politics of return and reintegration of displaced persons following ethnic conflict.

In parallel to her scholarship, Dr Brubaker has served as a consultant and adviser to the United Nations High Commissioner for Refugees, United Nations Development Programme, and the International Criminal Court.

In addition to her work as an international civil servant and in academia, Dr Brubaker has served in the private and non-profit sector on mediation and negotiation process design and overseen multi-stakeholder disputes.

She holds a Doctorate and Master’s from the University of Oxford and a BA from Swarthmore College.

Sanctions: And Why They Don’t Work (Very Well)