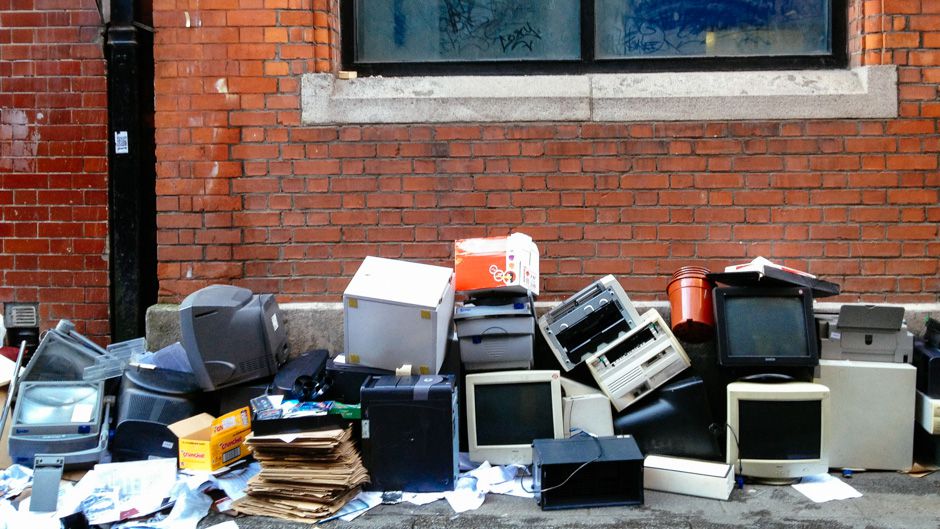 Electronic or electrical goods can be purchased in virtually every corner of the globe. In advanced economies, almost all homes contain several — from computers to toasters, from toys to dishwashers — some of which are likely to be on their way out as a family plans to purchase the updated version of a particular device. Indeed, every day worldwide an estimated 123,000 metric tons of damaged, obsolete or simply unwanted electronic and electrical devices and appliances are discarded and become ‘e-waste’.

As the social, environmental and economic risks posed by the growing volume of e-waste have become more apparent and more pressing in recent years, so has the need for sustainable solutions that reduce environmental impacts, increase resource recovery and enhance development opportunities.

Those aims are behind a science-based initiative called Solving the E-waste Problem (StEP) — founded in 2007 by various UN organisations and coordinated by United Nations University (UNU) — that creates and fosters partnerships between companies, academic institutions and governmental and non-governmental organisations. Today, StEP has grown into a truly international initiative with more than 60 members worldwide. The initiative — hosted at the SCYCLE (short for sustainable cycles) Operating Unit of the UNU Institute for Sustainability and Peace — initiates and participates in research projects to fill gaps in knowledge about e-waste and related issues.

Back in 2003, the European Community (EC) enacted legislation regulating waste electrical and electronic equipment (WEEE). As understanding of the issue grows, the Waste Electrical and Electronic Equipment Directive has been most recently revised in July this year. It now has the overall aim of seeing, by 2019, each of the 27 EU Member States recycle 85 percent of the electrical and electronics waste generated on their territory or 65 percent of the average weight of equipment placed on the market in the three preceding years. This will ensure that around 10 million tons, or roughly 20 kg per capita, will be collected.

This target is to be reached gradually, as it represents quite an increase from the existing binding EU collection target (in place through 2015) of 4 kg per capita. The current target means a total of about 2 million tons of WEEE are recycled annually, out of around 10 million tonnes of WEEE generated per year in the EU. (According to UNU-ISP SCYCLE, it is estimated that this volume will increase to 12 million tons by 2020).

In 2011, the formal WEEE system in Italy achieved a collection performance of 4.3 kg per person. While in line with current Directive targets, there remains a need to substantially improve the country’s WEEE collection in order to meet future targets required by the revised Directive. Thus in 2012, UNU-ISP SCYCLE lead-authored Household WEEE Generated in Italy on behalf of ECODOM — the leading Italian e-waste compliance scheme that manages the transportation and treatment of end-of-life appliances on a non-profit basis — in partnership with Politecnico di Milano and Ipsos.

The research focused on the quantification of the country’s household WEEE, and on determining the main complementary (to formal schemes) streams like waste bins and non-reported recycling, which are where a major share of WEEE ends up. The results clarify consumer habits and disposal attitudes towards WEEE and will serve legislators in the formulation of strategies to achieve future collection target levels.

Through a detailed reconstruction of the historical sales of different types of electronic and electrical equipment, the researchers were able to quantify the household accumulated stock, and then by also determining lifespan profiles of the various types of goods, the quantity of household WEEE generated was estimated. The report also examined disposal habits based on a specific survey designed and carried out in collaboration with IPSOS.

The researchers note that the difference between the amount of equipment put on the market and the volume of WEEE generated reveals a variety of market influences. This includes recent decreases in what is put on the market mainly due to the financial crisis.

Analysis of consumer habits revealed that, of current Italian household electronic and electrical equipment stock (which in total is equal to 215 kg/inhabitant or 29.7 products per person) — over 10 percent (in weight) comprise products no longer in use, although functional, or even not working. These hibernated quantities account for more than 20 kg/inhabitant. This is nearly four times the quantity that passed through the country’s WEEE system in 2011.

As shocking as that figure might be, some hopeful news is that the survey done for the study also revealed that, in nearly 14 percent of cases, there is no purchase of equivalent device/appliance when consumers dispose an old one.

When it comes to disposal habits, consumers disposed of the majority of WEEE generated (44 percent in weight) through municipal collection points and 25 percent of is collected through retailers, where, especially for large appliances, household pick-ups prevail. However, only 38.3 percent (4.29 kg/inhabitants) of that was managed by the formal WEEE System. To date, a significant share of WEEE is directly sent to treatment from municipal collection points and retailers.

The final portion is the 1.6 kg/inhabitants (10 percent of waste generated) that are disposed of improperly with other waste streams, ending up in landfills or receiving inappropriate treatment. This share can go up to 2.3 kg/inhabitant (14 percent of waste generated) when including uncertainty from consumers (i.e., they do not recall what they did with old equipment). This type of improper treatment is especially significant for the mixed (small appliance/equipment) WEEE stream.

The good news is that estimation of WEEE generated in 2011 and the breakdown of different return channels shows a substantial consistency with actual performance of the formal WEEE System. However, streams at greater risk of “leaking” from such a system are those with a growing economic value in recent years (large household appliances and mixed WEEE). This is mainly due to a favourable economic situation in downstream markets, a progressive specialisation and optimisation of treatment processes, and a certain level of over-capacity especially in certain areas, leading to fierce competition between recycling plants to have access to waste to be treated.

There are of course risks associated with the non-formal phenomena. Among them is the fact that growth of competition for access to waste can trigger a progressive race to bottom in treatment standards.

The formal WEEE system, through agreements with national recycler’s associations, ensures that full treatment of household WEEE only occurs in certified plants. This guarantee does not exist for complementary streams. Most recent official data (2009) on exports of WEEE (and components) reveal that approximately 2,500 tonnes of household WEEE have been exported (mainly to Germany and Austria), while over 110,000 of non-household have been exported (mainly to China and Pakistan).

However, consistency and frequency of reporting is significantly different between the formal WEEE system (monthly) and complementary channels (occurring only once a year). The report authors assert that that timely and consistent monitoring of all those involved in the supply chain for collection and treatment can guarantee a greater control over overall performance of the country.

The study also provides a methodology to estimate WEEE generated. Such methodology can be of help in establishing a target setting system capable of:

Study Helps Italy at Solving the E-waste Problem by Carol Smith is licensed under a Creative Commons Attribution-NonCommercial-ShareAlike 3.0 Unported License.