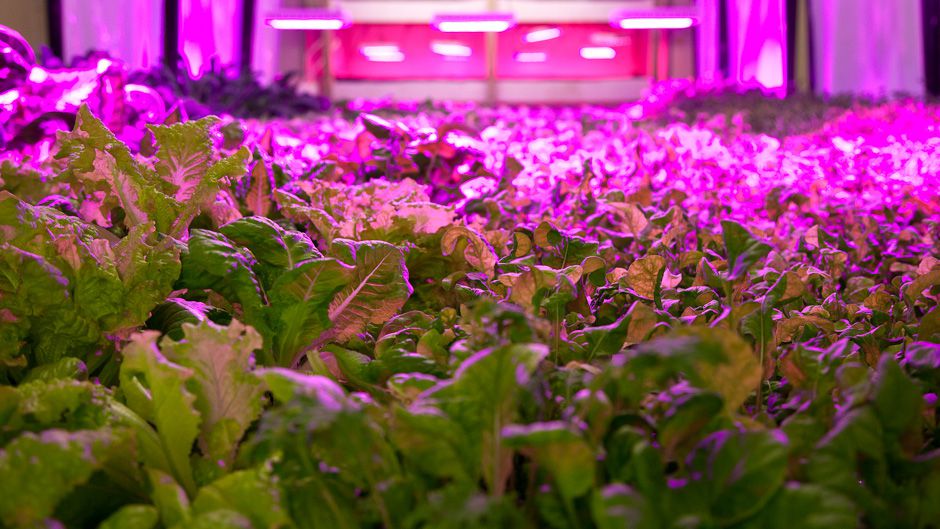 In many former industrially important cities in the United States and around the world, solid old buildings stand empty — useless. But one green innovator is proving that such structures could instead be off-the-grid, zero emission urban food oases.

The Plant, as it is known, is a complex food production system for raising tilapia, growing mushrooms and nurturing aquaponic vegetable gardens. It is also a hub for small artisanal food businesses like a bakery, a kombucha (fermented tea) maker and eventually a beer brewery. On top of that, this unique set-up will soon be running solely on green energy thanks to an anaerobic digester that will transform organic food waste — both from within The Plant and businesses in the surrounding community — into biogas that will power a turbine generator.

This bright project blooms from an unexpected spot: an abandoned pork processing plant in a huge infamous former stockyard that was essentially the birthplace of today’s industrialized meat business. From the mid 19th through the first half of the 20th century, Union Stockyards was the site that spelled death for an estimated 400 million animals, as it was accessible to all railroads serving Chicago.

Today, in the face of urbanization — not to mention concerns over fossil fuel use (‘food miles’, emissions, peak oil) and dwindling fish stocks — the 93,500 sq ft (8,686 m2) structure is ideally suited for indoor aquaponic urban farming.

Further, The Plant is well-placed to provide an estimated 125 green jobs and help stimulate the local economy and food security prospects of an economically distressed Chicago neighbourhood known as Back of the Yards.

The wizard behind this wonder, Edel, is also the owner and developer of the Chicago Sustainable Manufacturing Center (CSMC),  a green business incubator that is also housed in an old industrial building that is now fully occupied and profitable. (The rental income from the CSMC is reportedly paying for the mortgage on The Plant.)

Plant Chicago, the non-profit that owns and operates most of the vertical farm space, with a staff of just five has mounted such an impressive undertaking that it was named a semi-finalist in the 2011 Buckminster Fuller Challenge, the prestigious annual design science competition that described the project in this glowing light:

“The effort is solidly run and securely funded, with a well thought-out, realistic business plan drawing on extensive research; and it has strong community ties, a network of strategic alliances in the region, and strong political support, including from the highest echelons of Chicago’s municipal governance. The project is quite far along, and its odds of success seem very viable.” 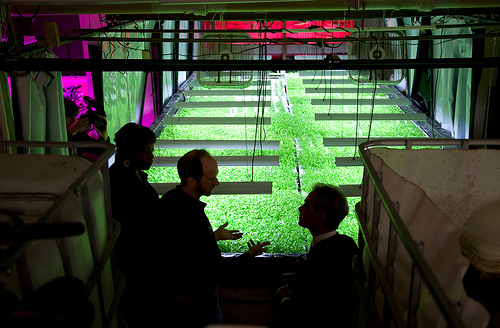 So Edel knows his stuff, and could easily be classified as an exceedingly ambitious and resourceful guy. Having bought the building in 2010 for only $525,000, he has overseen its “deconstruction” — defined on The Plant’s website as “the careful removal of materials from a building with the intention of reuse”.

Indeed, aside from boasting solid brick walls, being very well insulated and featuring a recently upgraded electrical system, the place also included lots of food-grade stainless steel, rubberized concrete floors and other materials that are being gratefully and enthusiastically repurposed during the long renovation process by The Plant’s staff, its “pack of volunteers” and its tenants.

Symbiotic to the maximum

Edel says the whole project is about closing waste loops: with physical waste and things like gases, carbon dioxide and oxygen all staying within the facility. So nothing leaves the building but food.

Aquaponics is a combination of aquaculture (fish farming) and hydroponics, or growing plants in water rather than soil. It capitalizes on the symbiotic products of each: the fish produce ammonia-based waste that is biofiltered into fertilizer that the plants absorb, cleaning the water for the fish to reuse.

The Plant takes symbiosis even further too, with plans like growing mushrooms in brewery ‘mash’ (the grain that’s been heated in water to make the beer) and redirecting CO2 from kombucha fermentation to growing rooms.

(See this excellent video for a quick and graphic illustration of The Plant’s symbiotic loops.)

Normally indoor farming would entail high electricity consumption due to grow lights and temperature control needs. Which is exactly why an anaerobic digester is being constructed that will eat food waste and send biogas to a combined heat and power system to produce the electricity to grow plants and the heat to make beer. This ambitious undertaking, spurred by a US$1.5 million grant from the state of Illinois is being (re)built using a military fighter jet engine.

The Plant will remain connected to the electrical grid and natural gas line, so as to have a backup power source and also be able to feed surplus electricity back to the public grid and thus achieving “net zero” energy usage.

Of course there are some challenges too, but it seems those never stop Edel.

Chicago’s municipal law forbids commercial fish farms (with fish classified as ‘livestock’!). Edel is, of course, pushing to have that changed. But meanwhile, aquaponic farming is permitted for educational purposes (which is one of The Plant’s goals anyway), so Edel set up a partnership with the Illinois Institute of Technology. Students learn about creating/improving a large-scale indoor growing operation, low emissions methods to power and heat a building and developing open-source control systems for such operations. Further, they have been developing the mushroom growing facility to produce Oyster and Lions Mane mushrooms (including set-up of an on-site laboratory to generate “spawn” for the new operation), as well as contributing to indoor and outdoor growing systems.

In store for the future

So, when will The Plant be entirely up and running? 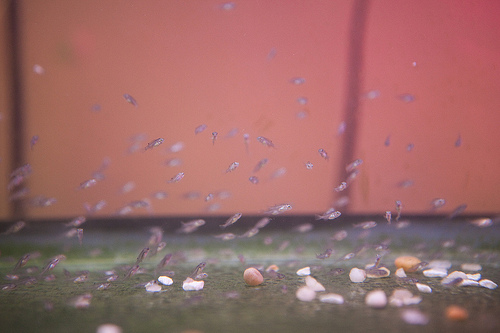 The building is becoming functional in stages. With three tenants right now (one aquaponic, one kombucha tea brewer and one bakery), the focus is on getting more in, with The Plant estimating that it will have five spaces fully built and leased by the end of 2012, and the renewable energy system up and running by June 2013.

Nearly all of the businesses will be for profit, raising and preparing food. The major exception is Plant Chicago. The non-profit will conduct research and educate the public on sustainable food production, job creation, renewable energy use and green building renovation. So on top of using growing space for research, it will operate a shared kitchen (estimated completion in 2014), where the job creation will take place, and host extensive educational programming to teach adults and children about The Plant.

The Plant’s commitment to sharing knowledge bodes well for the future of green enterprise. Once the entire model is in full swing, its energy-efficiency will increase the chances that it might spark a business trend, since Bloomberg Business Week already lists vertical farming as one of the top 20 businesses of the future.

Symbiotic Urban Farming and Industrial Reuse in Chicago by Carol Smith is licensed under a Creative Commons Attribution-NonCommercial-ShareAlike 3.0 Unported License.