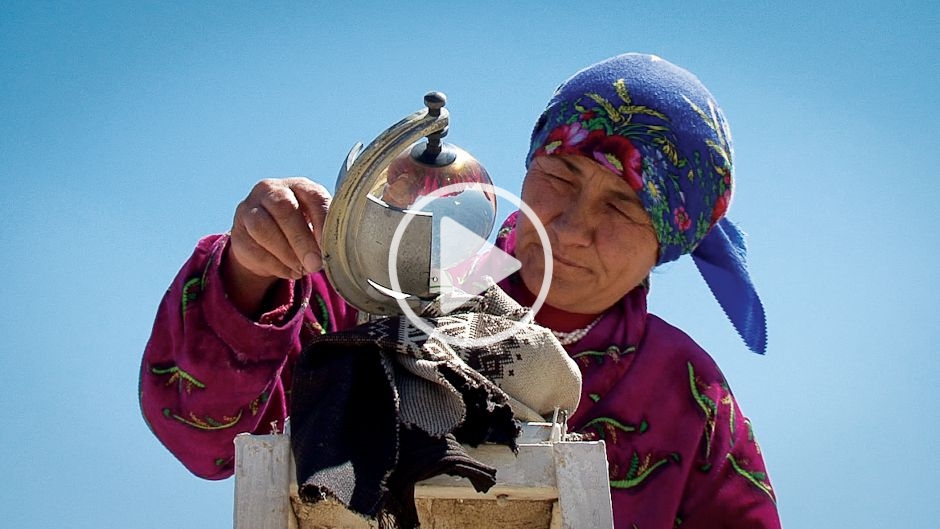 “Now it’s better, it’s good for us. The warmer weather is better than the cold. Apples and mulberries now grow in our village.”

Kurbonbegim is an elderly farmer who has lived all her life in the Khuf Valley located in the Western Pamir Mountains. The hotter summers in Kurbonbegim’s and surrounding villages actually mean that new crops can be grown for the first time. On the surface, it can appear that climate change is a good thing in places like this.

Yet, at the same time, she and thousands like her in this mountainous, mostly rural part of the world rely heavily on the glaciers to provide the water for irrigating crops, nourishing livestock and, of course, drinking.

“Our life is connected to water. Without water, what do we do?” she asks, concerned that local water stocks are decreasing.

[quote quote=”The government has calculated that the water volume in the country’s Pamir Mountain glaciers has decreased 25% since 1960.” type=”text”]

The way that individual people perceive climate change is complex. Climate change impacts are not simply good or bad. They can be both, as demonstrated in this Our World video-brief showcasing the perspectives on climate change of Tajik women.

The project is a collaboration with scientists Professor Abdusattor Saidov (Institute of Zoology and Parasitology of Academy of Sciences, Tajikistan) and Dr. Abdulnazar Abdulnazarov (Pamir Biological Institute of Academy of Sciences, Tajikistan). Its aim is to bring together leading Tajik scientists and local communities to document and synergize scientific and traditional knowledge on climate change.

Overall, and not surprisingly, climatic models are indicating Tajikistan will experience greater fluctuations and uncertainty in temperatures, precipitation levels, seasonal and weather events. While the accuracy and variability of local impacts is still difficult to determine, the summers may grow hotter, and the winters colder.  And although more crops may grow in previously colder mountain areas, there may be less glacial melt to service them.

Professor Abdulhamid Kayumov, a leading engineering scientist and Tajikistan’s only scientific expert to visit the Antarctic, participated in a 2009 Antarctic ice sheet monitoring expedition. He says Tajikistan’s Pamir highlands have similarities to the south pole, and given the rate of melt of Tajikistan’s largest glacier,  Fedchenko, there is a strong need to bolster local monitoring of the Pamir region.

Figures in the Government of Tajikistan’s Second National Communication under the United Nations Framework Convention on Climate Change (UNFCCC), paint a difficult picture for the developing nation and its regional lowland neighbours.

[quote quote=”Climate change impacts in Tajikistan are not confined to rising food and water insecurity that results from melting glaciers. Health problems, as well as impacts upon native flora and fauna, are increasingly being felt by people living in both rural and urban areas.” type=”text” ]

The government has calculated that the water volume in the country’s Pamir Mountain glaciers has decreased 25% since 1960. These glaciers currently provide over 50% of all the water resources of the Aral Sea Basin — quenching the area’s 40 million people. The glacial melt’s impact on hydrology regimes will also have serious consequences for Tajikistan’s ecological communities.

Images from Tajikistan’s State Administration for Hydrometeorology show that one particular glacier, Garmo, has retreated 7 km since 1932 — which means a shrinkage of around 100 metres per year. The report describes this as “the most significant retreat among the largest glaciers in Central Asia.” 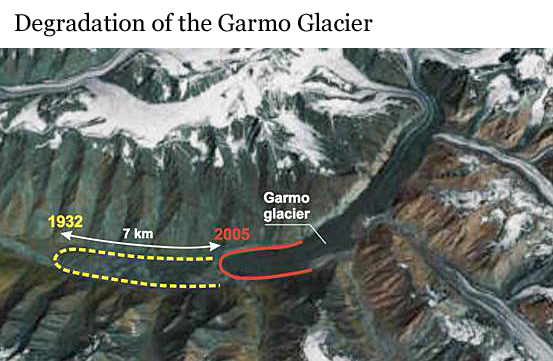 Furthermore, Fedchenko, the longest glacier in the world outside of the polar regions, reduced by 44 km (or 6% of total area) according to a study conducted from 1966-2000. Recent 2006 reports pegged this shrinkage at 16m/year. Currently, estimates suggest the glacier’s height has also shrunk 50 metres since 1980, triggering experts to describe it as “growing thin”.

Tajik scientists are concerned that climate change modelling to date has tended to underestimate temperature increases and therefore, as well, like glacial melt. This is the ‘lag effect’ that was also identified in the 2007 Stern Report. 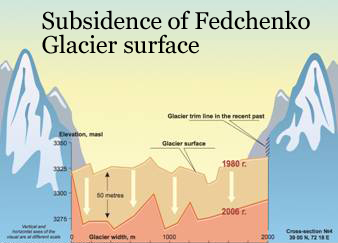 Climate change impacts in Tajikistan are not confined to rising food and water insecurity that results from melting glaciers. Health problems, as well as impacts upon native flora and fauna, are increasingly being felt by people living in both rural and urban areas.

In Tajikistan’s lower lands, rising temperatures have invited malaria into communities where it was previously not seen and whose people now require information on how to adapt to the disease.

“As a result of climate warming, vector-born and other dangerous diseases including malaria will spread significantly,” Tajikistan’s State of the Environment Report had already began warning back in 2001.

On the Eastern side of the Pamirs, near Bulunkul Lake, Bakhtibegim Nabieva and her husband run the local meteorology station. Their own, local perspective on climate change is somewhat different to Kurbonbegim’s, given a recent winter of extreme cold winter.

“Last year there was a large amount of snow. It was harmful for us and a great amount of livestock died.”

“Because of this year’s extreme climate, all the people were sick,” Nabieva claims.

Despite extremely cold temperatures recently, she has also observed, over a decade, how some local lakes are shrinking in size.

“Bulunkul Lake is disappearing, it’s evaporating. There is not enough wetland grass for our livestock.”

Nabieva says that another local waterhole, Lake Tuz, has salinified to the point where the salt is picked up by the wind and has caused respiratory problems for people in the area.

What’s more is that it is not just health of humans at risk but also local animals. Alpine lakes feed not just migratory birds. As they decrease in volume, the whole ecosystem will be affected — everything from the fish to the Ibex, sub-alpine grasses to the red book-listed snow leopard.

Tajik scientists, who prepared the Second National Communication with support from the Berlin based Potsdam Institute for Climate Impact Research, have a high level of expertise in meteorological science. Many of the 50 scientists and experts involved in preparing the report were trained in the days of the old Soviet Union.

In fact, war-torn Afghanistan, which shares a border along the Pamir mountains, has benefitted from this expertise through an interdisciplinary network focusing on sustainable land use in the Pamir region.

Even still, Tajikistan’s knowledge resources require considerably more local and international funding for research, modelling and interdisciplinary monitoring at a local level. Also, the dominance of the English language in climate change discussions must be rectified in order to fully engage Russian-trained experts across Central and Inner Asia.

After all, it is the Tajik experts that will play a leading role in the development of early and locally relevant adaptation strategies for their people. So much rests on their shoulders.

It is hoped that this project has shed light on innovative monitoring possibilities between scientific expertise and local knowledge, although much more needs to be done.

This video-brief was shot and directed by Ivan Golovnev and produced by Citt Williams from the UNU, in association with the Institute of Zoology and Parasitology at the Academy of Sciences, Tajikistan, and the Christensen Fund.