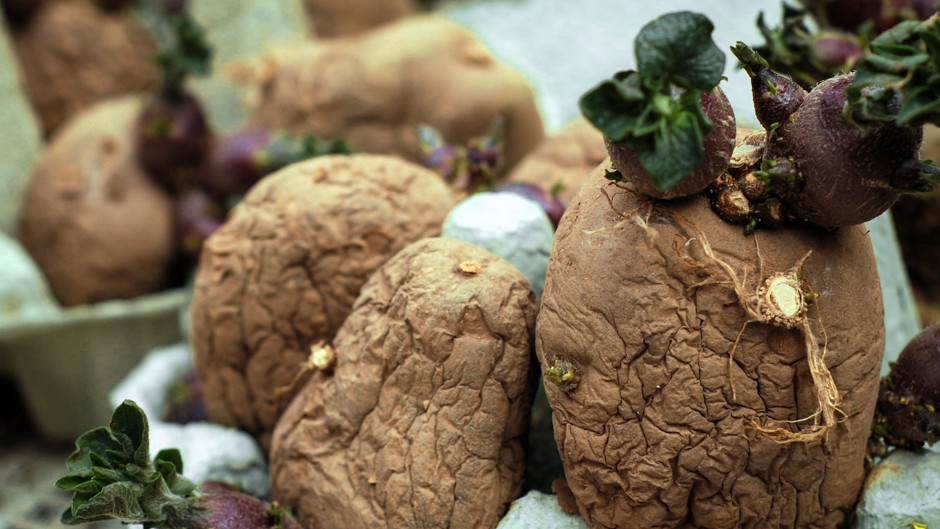 The potato has long been an Australian favourite, and in Tasmania these days the tuber is even in the sights of seed specialists.

“Society has moved away from potato diversity,” says Leonie White, Seed Potato Certification Officer of the Tasmanian Institute of Agricultural Research, a joint venture between the University of Tasmania and the Tasmanian State Government.

But White and her team at the Tasmanian Certified Seed Potato Scheme, known as TasSeed, are doing something about it. Since mid 2009 they have been shaping a project called Fresh Market Heritage and Boutique Potato Development.

The purpose of seed certification schemes like TasSeed is to preserve and nurture the genes of our most precious crops and support the custodians who ensure these survive. On behalf of the public and private growers, White and her colleagues keep watch over a collection of 130-140 old and emerging varieties. This current project started off with five farmers, although there has been more response of late with other farmers wanting to come on board.

[quote quote=”We live in a society where we want something quick and easy. So when the bigger supermarkets come in, they look for specific varieties that suit everybody’s needs.” author=”Leonie White” ]

Since 1988, they have been protecting the Australian island state’s tissue culture collection for what is a truly global crop — the average person on the planet consumes a whopping 31.3 kilograms of potato per year.

TasSeed promotes fresh market varieties of potatoes by producing mini-tubers derived from potato cultures. These plantlets are grown in test-tubes in a room where a sophisticated computer system controls the environment and regulates fluorescent grow lights, including periods of light and dark.

The plantlets are vulnerable to contamination, and therefore have to be taken care of through a highly intensive process of sterilisation. Furthermore, the cost of failure is high, as importing lost varieties can cost between US$3,500-$5,500.

“Some of our common heritage varieties have been around for 70 or 80 years or more and it would be a shame to lose them,” White laments.

After the plantlets are cultivated, they are passed onto certified potato seed growers, who have ordered them 12 months in advance. White says that potential growers have to be thinking ahead since it takes around 5 years to get to a ‘ware crop’ (an eating crop) from a ‘seed crop’ (which starts as a mini-tuber).

Now you might be wondering why all this effort is taking place to safeguard the world’s fourth largest crop (the largest of all non-grain crops). After all, more than 5,000 types of potatoes are still cultivated in the Andes region today, just like they were during the time of the Ancient Incas.

However, if you visit a supermarket in an urbanised or industrialised part of the world, you’re likely to find the same 5 or 6 common varieties of potatoes.

“Our biggest supermarkets tend to have just washed or brushed potatoes,” White points out.

“We live in a society where we want something quick and easy. So when the bigger supermarkets come in, they look for specific varieties that suit everybody’s needs.”

With this endless drive of corporate consolidation and consumer convenience, no wonder the Food and Agriculture Organization (FAO) of the United Nations finds that 75% of food diversity has been lost in the last 100 years.

Positively, there has been a micro-movement of citizens to maintain biodiversity themselves by raising and swapping seeds of crops like apples, for which you will find only a few varieties available in supermarkets.

For the potato and other fresh produce, many people make their purchasing decisions based on price, appearance and preparation time (think about the time you might spend peeling potatoes).

“Sometimes, because we don’t know our varieties of potatoes, we look for something clean, whereas in reality the dirt on the potato will probably preserve it for longer,” White explains.

Our fast-food buying and eating habits also impact on the producers we depend upon. In Tasmania, multinational companies such as McDonalds and McCain specify and contract very few potato varieties that have high yields and are suitable for frozen fry-cut, often at a lower price than those used for home cooking. While such economies of scale are likely to be lauded by governments and one-dimensional economic models, farmers themselves have regularly taken a stand.

Year of the potato, every year

You may be intrigued to find out that the UN designated 2008 as the Year of the Potato. The potato has not received this much attention since the infamous potato famine of the 1840s, for which a reliance on a limited number of potato varieties was to blame.

This history is not forgotten by the FAO:

Beyond the current economic system, the biodiversity of the potato continues to be threatened by diseases and climate change. According to the FAO, as a result of the latter, the area where wild potatoes grow naturally could be reduced by as much as 70%.

In response, protection of potato diversity is happening all around the world including in this versatile vegetable’s traditional home. Peruvian farmers in the Andes have established their own ‘potato park’ to conserve and sustainably use remaining varieties and maintain their rights over potato strains they have developed.

A further preoccupation playing on the minds of potato lovers is the possibility of further complications due to genetic modification.

Back in Tasmania, White feels that people are slowly becoming aware of all the different shapes, sizes and colours of potatoes. Some of the more interesting varieties include the Cranberry Red, and the Purple Congo which, as its name suggests, has a purple skin and flesh. These and many others are listed in this grower’s guide which includes details the best use for each variety in the kitchen, e.g. for boiling, baking, salads etc.

“We have unusually-named potatoes that have been in our tissue culture collection for years. These have been maintained, but not used until now. We have grown around 16 varieties that we are sending to some high-profile chefs for feedback.”

And what, you may ask, are White’s favourite potatoes?

“I like the Pink Eye and Nicola varieties,” she confided.

Our World 2.0 is heartened to be able to report on an impressive model of scientifically-based cooperation between a government and a research institution that directly engages and supports farmers.

“Hopefully our programme will bring some potato varieties back and promote new recipes and fresh market growers,” says White.

We sure hope so too.