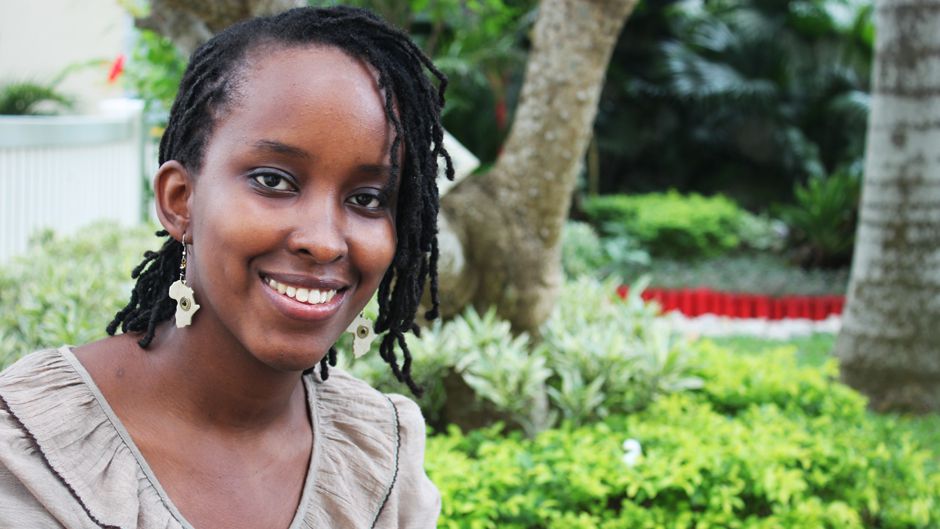 Akaliza Keza Gara is only 27, but she’s achieved much for women in Rwanda’s technology sector in just a short space of time.

She is the founder and managing director of Shaking Sun, a multimedia business specialising in website development, graphic design and computer animation. She has a list of accolades to her name, including being one of four Rwandan women entrepreneurs recognised in 2012 for their exceptional efforts in Information Communication Technology (ICT) by the International Telecommunication Union, and being appointed as a member of the 4Afrika advisory council for Microsoft this year.

But Gara considers her main achievement as being part of a team of animators who worked on African Tales, the first ever cartoon series produced in Rwanda.

“Seeing my name in the credits [of the cartoon series] was a big moment for me and I am so thankful I had that opportunity,” she tells IPS.

As a university graduate in multimedia technology, Gara is convinced that since women are consumers of ICT, it is important that they are also a part of the developers of technology so they can ensure that there are more diverse products available that appeal to both genders. However, Gara notes that there are a limited number of Rwandan women in the ICT industry.

“But there is  still hope that newer developments in the field of IT can now [see] women [working] alongside men,” she says.

There are no clear figures about the total number of women in the IT industry here. The blueprint for this Central African nation’s second phase of economic development emphasizes transforming itself  from an agrarian to knowledge-based economy in order to achieve middle-income status by 2020.

Rwanda has been ranked seventh in Africa and 80th in the global ranking among countries that have embarked on boosting broadband affordability and uptake.

A 2012 report by the United Nations Broadband Commission for Digital Development, praised Rwanda for laying a 2,500-km national fibre optic cable in order to provide broadband internet for all. Rwanda has been ranked seventh in Africa and 80th in the global ranking among countries that have embarked on boosting broadband affordability and uptake.

While the country has been developing national action plans on ICT since 2001, it is only recently that the need for women’s participation in the sector has been magnified.

Gara is among a group of young women entrepreneurs here who are promoting an initiative called “Girls In ICT Rwanda”, which was launched last year to encourage more girls and women to embrace the field. The project provides grants to young women to implement and market their ICT projects. Money is allocated based on the innovation aspect for each project.

Goldon Kalema, a senior technologist in charge of e-government services coordination in the Rwanda’s Ministry of Youth and ICT, tells IPS that the initiative aims to promote and encourage the deployment and utilisation of ICTs.

“The skills development area is designated to be among the key five focus areas identified to fuel continued growth, ” he says.

In 2012, a knowledge and technology lab — known more commonly as KLab — was established as the first-ever ICT innovation centre in the country to bring innovators together and give them the resources they need to explore their ideas, learn from each other, and develop innovative technology.

However, young women still remain intimidated by the technology sector because of the stereotype that it was a male-dominated field.

“If women are part of and can make up a huge part of the market for ICT products, they can also enjoy the available opportunities alongside men in the ICT industry from both developer and end-user perspective,” Gara points out.

Gara believes that there is also a need to ensure that young women acquire relevant skills. “Girls In ICT Rwanda” also organises events for female students here, giving them an opportunity to showcase their ICT skills and meet role models. It has led to the introduction of a wide variety of training courses that are provide free of charge and are intended especially for young women.

“This training has been vital in helping a number of beneficiaries acquire new skills, which lead to new and interesting jobs,” Gara says.

Nancy Sibo, a young student in the faculty of Agricultural Engineering at the University of Rwanda, is winner of a contest called Ms. Geek Rwanda. The competition, which is hosted by “Girls In ICT Rwanda” and is open to female university students who have come up with their own technology innovations, is in its first year.

“There is currently a growing need to nudge young Rwandan girls into being innovative, especially in the area of technology.” — Nancy Sibo, student.

Sibo developed a mobile application that allows farmers to find out in real time the nearest area where they can get access to veterinary services and artificial insemination.

“There is currently a growing need to nudge young Rwandan girls into being innovative, especially in the area of technology … and promoting the girl effect approach for the sustainable development of the nation,” Sibo tells IPS.

Meanwhile, Gara is doing just that with cartoons. She is currently in the process of setting up an animation studio to create cartoons and films targeting African children.

“My commitment is to encourage more girls and women to join the ICT sector, but I also get the feeling that by establishing an animation studio this will showcase my innovations to help Rwandan children, by creating characters and settings that they can relate to and stories to entertain and inspire them,” she explains.

Aimable Twahirwa is a senior reporter and science journalist based in Kigali, Rwanda with 10 years of experience. Aimable holds a bachelor’s degree in computer science studies with a diploma is science journalism.