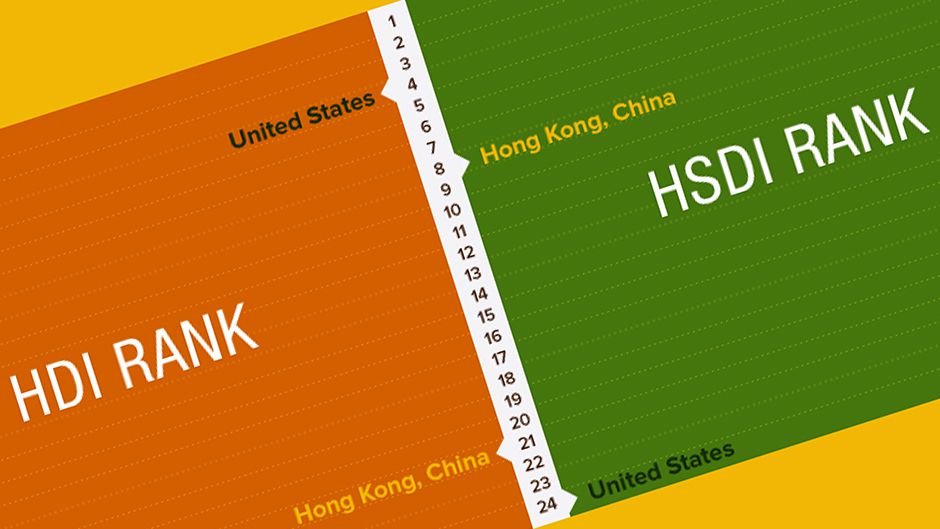 The pursuit of happiness, human development and the environment are intertwined in two profound ways. First, we developed from hunters and gatherers into urbanites during a period of remarkable and reliable climate stability. This can no longer be taken for granted. Second, research shows that our well-being, happiness and quality of life are improved by environmental health and the services ecosystems provide for humans — like relaxation, clean air and fertile soil.

The UN’s iconic Human Development Index (HDI) is 20 years old today. Of all the world’s indices, the HDI is surely the most ingenious. It ranks countries by the quality of life they give to their people. Its brilliance lies in its simplicity.

According to the index, three parameters govern human development and quality of life: wealth, health and education. The wealth of a nation is measured this year by Gross National Income (it used to be measured by Gross National Product), health is quantified by citizens’ longevity (life expectancy at birth) and years of schooling indicate education.

Limits to the Human Development Index

The HDI’s simplicity has ensured its endurance. It is an aspirational index and it sets straightforward targets for nations. Its influence should not be underestimated because it has forced nations to look beyond national income as a crude measure of success — a vital step as our global society attempts to live within planetary boundaries. Its effect has seen governments and international organizations set up projects and policies to attempt to increase their HDI rank. Indeed, the foreword of the 2010 report states, “The human development approach has profoundly affected an entire generation of policy-makers and development specialists around the world.”

But the HDI has one major failing: incredibly, it takes no account of the environment. This is a telling omission given that there is overwhelming evidence that human development is not sustainable.

The founder of the Human Development Report, Mahbub ul Haq, says “[t]he basic purpose of development is to enlarge people’s choices. In principle, these choices can be infinite and can change over time”.

We argue that our choices are limited by the fact that we have only one planet. With current global CO2 emission rates, we need two planets. Nevertheless, development could become sustainable but to achieve this we need better measuring tools.

In 2009, UN Secretary General Ban Ki-moon told the World Climate Conference: “Our foot is stuck on the accelerator and we are heading towards an abyss.”

So, the UN accepts the overwhelming evidence that humanity is profoundly altering some of Earth’s key biological, physical and chemical cycles. It accepts future generations will be adversely affected, particularly in poorer countries. And it accepts there is an urgent need to act.

We have attempted to add an environmental dimension to the HDI, creating what we hope is closer to a human sustainable development index.

After the release of last year’s HDI, we (or that is, Chuluun Togtokh) recalculated the index, but added a fourth parameter: per capita carbon emissions.

Sure, we could make some complex calculation on a country’s environmental footprint based on carbon plus biodiversity, pollution and many other factors. But, like longevity as an indicator of health, sticking with carbon emissions keeps the iconic simplicity.

Indeed, greenhouse gas emissions are an integral part of our system of production and consumption; we have known this a long while, thanks to work like A Handbook of Industrial Ecology by Robert U. Ayres and Leslie Ayres, published in 1969. Ditto for the carbon footprint — it is closely inter-linked with “the energy cost of living” set out by Robert Herendeen and Jerry Tanaka back in 1976.

So how does our new Human Sustainable Development Index compare with the HDI? The most dramatic changes are at the top. Least-developed nations see negligible changes. Gas-guzzlers like the United States and Canada plummet out of the top ten. Put simply, their lifestyle — based on high use of oil and gas — is unsustainable.

The US is on a roller-coaster ride. In one year it has moved nine places up the HDI table from 13th to fourth. But when you take account of carbon emissions the picture changes: the US drops 20 places to 24th. Canada too slumps from a respectable eighth position to 23rd.

The index shows that, while the US is vilified for its poor record on tackling emissions, Canada is a long way from being a role model. Yet, with the traditional HDI, the UN is using such countries with very high human development as examples to the rest of the world. Other nations attempting to emulate the success of these particular countries in terms of human development look at the economic model and policies adopted to bring about that success.

We argue this is flawed and in direct contradiction of Ban Ki-moon’s urgent call to divert humanity’s course onto a sustainable pathway.

But let’s now look at the leaders. Europe dominates the rankings on our new index. Norway remains on top. New Zealand pushes it neighbour Australia off the second position and Sweden moves from ninth to third. Switzerland and France both advance nine places to fourth and fifth respectively, followed by Ireland and the Netherlands. Hong Kong leaps from 21st to eighth, then Germany. Surprisingly, Australia clings on to a top ten position, even with one of the world’s highest per capita carbon emissions.

The countries in the top five — Norway, New Zealand, Sweden, Switzerland and France — have enviable standards of living, easily on a par with their petrol-addicted rivals. These countries, though not perfect, show that the pursuit of happiness is not entirely in opposition to a sustainable economy.

The nations topping the new index have economic models that, relatively speaking, are moving in the right direction. These countries should be rewarded for their efforts and held up as examples to other nations.

Nonetheless, no one would argue these countries can rest on their laurels. Indeed, when the Global Footprint Network plotted the HDI against ecological footprints per capita, only one country, Cuba, was deemed to have a genuinely sustainable economy. It is worth noting that Cuba has achieved this feat without access to the greenest technology. Cuba does not appear in the 2010 HDI.

Hong Kong and Brazil advanced 13 and 16 places respectively in new rankings. They may act as examples of how rapid transition to industrialized economies can have less of an impact on the environment. 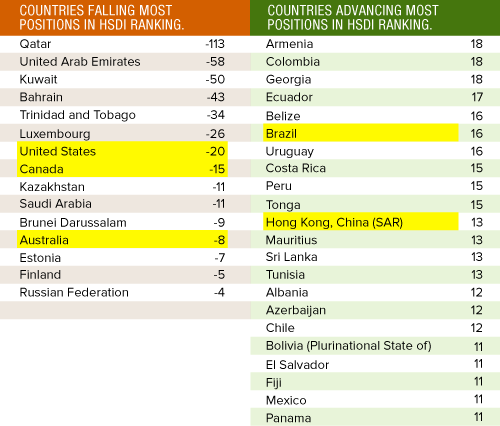 By including carbon emissions Armenia, Colombia, Georgia, Ecuador, Belize, Brazil, and Uruguay advanced between 16 and 18 places in comparison to their 2010 HDI ranking. Generally, Latin American countries advanced more than other regions.

A new index for the UN

After 20 years of the HDI, it is clear there are no quick fixes to improving a country’s quality of life: progress comes through long-term sustained policy changes. The US, for example, has slowly improved its standing in the HDI with an average increase of one quarter of a percentage point per year.

Likewise, global sustainability is a long-term challenge. The big shifts will be made by thinking sustainably now when taking decisions on where and how to build roads and transport links, power plants, housing and the rest of the infrastructure to support the world’s heaving population over the next forty years and beyond.

The original HDI forced people to reconsider the meaning of national development. Its value lies in its ability to clearly display the impact of long-term policy interventions. But the UN must be wary of sending out the wrong signal.

The value of our sustainable HDI is twofold. It demonstrates that with the correct policies in place, it is possible to have a remarkably high quality of life and lower emissions. Secondly, it is a step towards linking human development, climate change and sustainable development, at least within the UN.

As the economist Nicholas Stern pointed out recently, “Developing countries may not be ready to adopt (emissions targets) until there is substantial evidence through actions in developed countries that low-carbon economic growth is possible.”

The Human Sustainable Development Index is an attempt to address this gap.

The Human Sustainable Development Index is based on an original idea by Chuluun Togtokh (IGBP’s Global Change 2009, News).

Chuluun Togtokh is vice chair of the International Geosphere-Biosphere Programme’s global change committee of Mongolia and a researcher in sustainable development at the National University of Mongolia.

Owen Gaffney is Director of Communications at the International Geosphere-Biosphere Programme, based in Stockholm.