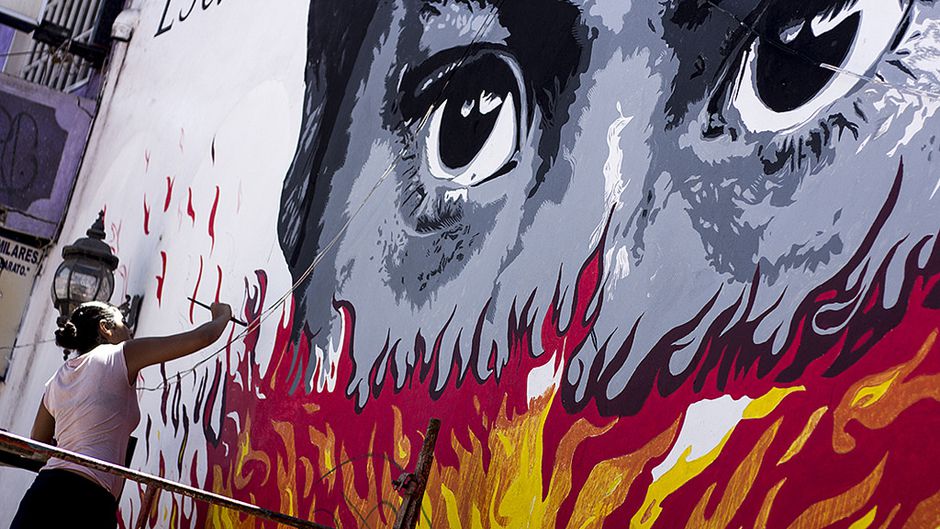 “For Justice, Security and the Restoration of Our Territory” — that’s the slogan emblazoned on the uniform of the people in charge of security in Cherán, one of the main indigenous communities in the heart of the State of Michoacán in western Mexico. The story of Cherán’s resistance goes back centuries to when it held off the Aztec empire, a foreshadowing of the spirit of independence that enabled it to take on organized crime and successfully re-establish political self-governance and self-defense in 2011.

Until recently, like many rural areas of the country, Cherán had experienced a rising tide of violence as unwelcome elements increasingly moved in to exploit its natural resources. As described in the documentary “Resistencia de Cherán“ (Cherán’s Resistence):

“Cherán was made up of 27,000 hectares of forest [which were] destroyed, leaving a mere 7,000 hectares. In other words they razed 20,000 hectares to the ground. Basically, there was no forest left. And what’s more, they destroyed the fauna, our animals, everything that affects the lives of the Purépecha people.”

Another member of the community interviewed in the documentary recounts how partisan politics prevented a concerted response to threats against and abuse of the region’s indigenous inhabitants:

“Their cars and trucks would drive down all the main roads of the community. They would mock us as they passed and not just that, they would go into stores and ransack them and then leave. Nobody could say anything. Women, men, all of us, we felt powerless to yell or stop them. Our situation was critical, it was desperate, but nothing tangible could be done because we couldn’t agree, each of us belonged to a different political party.”

The community approached local and municipal authorities on repeated occasions asking for help — all to no avail. Frustrated, several members of the community banded together and, under the leadership of a group of courageous women, they took matters into their own hands. Early in the hours of 15 April 2011, they faced down the trucks used for the clandestine cutting of trees. 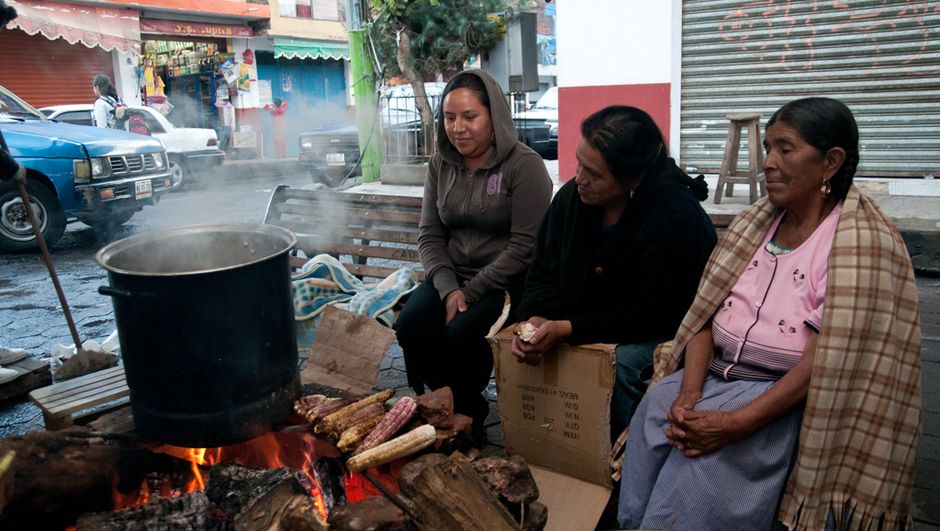 The people implemented a neighbourhood watch system with groups patrolling both the town and the mountain forests. They met around bonfires to forge pacts and ensure that nobody outside the community interfered in its administration. Photo: Eneas De Troya. Creative Commons BY (cropped).

In another documentary titled “Cherán: tierra para soñar” (Land of our dreams), one of the women who took part describes the events of that fateful day:

“When we set out it was dawn and still dark, around 6:30 in the morning. The church bells were ringing calling people to mass […] I never really thought this would go far […] We were just five women from here, from this neighbourhood, a bunch of older women, there were no men, maybe a few men but mostly women […] We chased after the cars throwing stones, one woman even got hit and scraped all the skin off her knee when a car backed into her…”

The showdown galvanized the community, which put up barricades to control who came into the area. They implemented a neighbourhood watch system with groups patrolling both the town and the mountain forests, and they met around bonfires to forge pacts and ensure that nobody outside the community interfered in its administration. In a press release put out two weeks after these events, the people of Cherán pointed to the blatant lack of response on the part of government officials.

In November of the same year, in response to the community’s explicit request, the Superior Court of Mexico’s Electoral Tribunal of the Federal Judiciary cancelled municipal elections in Cherán, which opened the doors to autonomous consultation within the community. The K’eris Council (a council of elders in the Purépecha language) has since been established and self-governance is practiced without recourse to elections and independent of the formal system of Mexican political parties.

2014 marked yet another victory in the defence of Cherán’s territory and the collective rights of its indigenous population. Mexico’s Supreme Court recognized the community of Cherán’s right to consultation each time legislative or administrative changes are proposed, which might have an impact on the community and its way of life, in accordance with the terms of international conventions.

Today, almost four years after political autonomy was achieved, the inhabitants of Cherán are firm in their resolve, although they acknowledge the path chosen does present its own challenges. 2015 is a year in which Mexicans go to the polls in local and federal elections, and political pressure and interests have already begun to manifest themselves. In fact, late last year, a group submitted a petition to the electoral authority in Michoacán in which they requested the traditional system of political parties be restored. In the end, the electoral authority decided in favour of communal government, acknowledging the people of Cherán’s right to determine their own future. 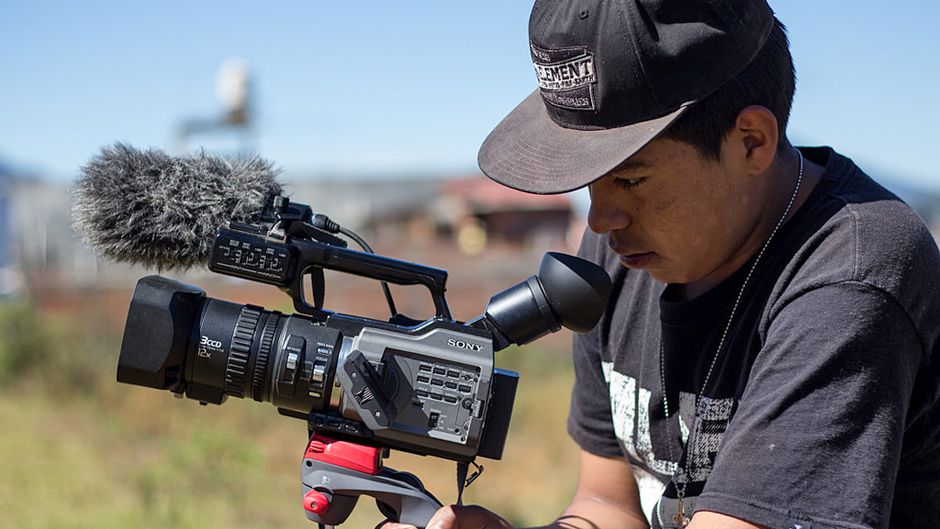 Last November the community launched TV Cherán, a second broadcast of which is in production to highlight the significant effort being made to ensure the voice of the people of Cherán continues to be heard. Photo: kinoluiggi. Creative Commons BY-NC-SA (cropped).

After discussions around bonfires and throughout the four communities, the people decided to maintain their autonomous political status, in keeping with their history and traditions. This consensus is underscored by testimony compiled by the journalism cooperative Subversiones in its video: “Partidos ojetes, Cherán no es un juguete” (Partisan SOBs, Cherán is not a toy):

“The people themselves decide what can and cannot be done in the community. Political parties don’t do that, they were the ones who determined what to do or not to do. But, now the Assembly is the supreme authority and it is where one can speak and be listened to by the other [members] and by political officials too. That did not happen before.”

Cherán’s autonomy is also expressed and strengthened through its use of alternative media. A tangible example is the work that has gone into documenting and protecting the community’s traditions through its blog, Facebook page and YouTube channel. Cherán also has its own community radio, Radio Fogata, launched in 2011 and run by young people; and last November it unveiled TV Cherán, a second broadcast of which is in production to highlight the significant effort being made to ensure the voice of the people of Cherán continues to be heard.

While trees quietly grow in the mountains of Michoacán, in the villages they proudly hold up the multicoloured banner symbolizing their united strength, Juchari Uinapekua, and sing the ballad of the legendary people of Cherán:

Children of mother earth / our songs, ours prayers

My people have awoken / they’ve begun to light the fire

The seeds are growing / hope is growing.

The Cherán Indigenous Community’s Remarkable Road to Self-rule in Mexico by Giovanna Salazar is licensed under a Creative Commons Attribution 4.0 International License.
Permissions beyond the scope of this license may be available at GlobalVoices.

Originally from Mexico City, Giovanna Salazar is currently living in Amsterdam where she is following a Master’s programme focussed on New Media and Digital Culture. She has a degree in Education and New Technologies. Salazar has tried to link her professional experiences to human rights and is passionate about issues related to the use of social media to promote citizen and community participation.

A Sojourn in Mexico’s Livingroom