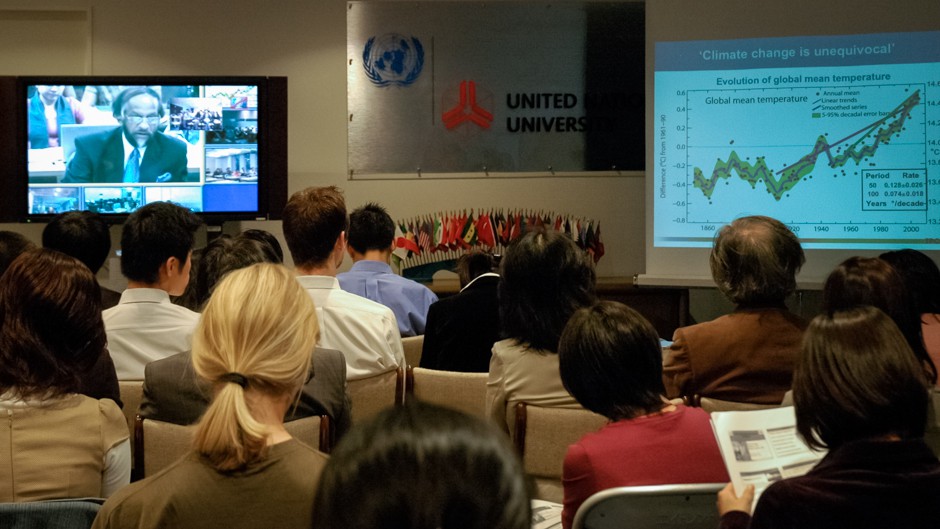 With the Copenhagen climate negotiations just days away, it is a good time to reflect upon our role in either solving or aggravating climate woes.

That is exactly what we have been doing here at the United Nations University (UNU) in the past few years. Within the UN as a whole, considerable efforts are being made to go Climate Neutral. This takes the form of inventories on emissions generated, efforts to reduce those emissions and when that is not possible, offsetting.

In this context, the UNU in Tokyo has been implementing various initiatives to reduce its carbon dioxide (CO2) emissions since 2001. In an effort to cut emissions from the consumption of various utilities, the Cool UNU and Warm UNU campaigns have been put into action, resulting in cost savings and emission reductions.

A considerable concern remained, however, about the large carbon footprint caused by the air travel of UNU researchers as they implement projects across the globe. The first challenge was to measure the scale of that impact.

Researchers at the UNU have analyzed the data on travel by staff from 2004 to 2008. The analysis covered international flights only. The online CO2 calculator by TerraPass was used to compute the emissions of each flight taken. Transits and stopovers were noted, where applicable.

Although the resulting total figure is an estimate, it provides a good approximation of the scale of the carbon footprint of each journey. The results were very interesting and somewhat surprising. The total mileage traveled by UNU personnel using international flights had been steadily decreasing from the 2004 to 2008. In the most recent analysis, for the year 2008, a 30 percent decrease in the total distance traveled was recorded. Total CO2 emissions from these travels were calculated to be 405,822 kg, which translates to a 33 percent decrease from 2007.

On top of this, consideration should be given to reducing the total number of flights taken and the average carbon footprint of each researcher. The current level of CO2 emissions per capita for UNU researchers, based on their air travel, was calculated to be 5,411 kg. This number is well above the yearly emissions of the average world citizen, which is 4,080kg CO2 as reported in the UNEP e-book Kick the Habit: A UN Guide to Climate Neutrality.

So the good news is that the UNU is changing and reducing its CO2 emissions. But a lot more could be done in terms of setting priorities for travel, using video conferencing and organising virtual meetings (bearing in mind and working around the poor internet connections in developing and least developed countries).

Where personal appearances are unavoidable, direct flights should be preferred over connecting flights. The CO2 calculator adds a significant value for every stopover taken in the course of the journey as more fuel is burned during takeoffs and landings than when flying at constant altitude. According to UNEP’s Kick the Habit, economy class flying would be the only choice in view of the fact that only 220 kg of CO2 are puffed out for every 1,000 km distance flight. This value soars to 510 kg for business class and 770 kg for first class at the equivalent distance.

While cost, convenience, and promptness remain the primary criteria used by the UN in selecting flight plans, CO2 emissions should be considered as one of the factors in choosing airline carriers for international flights. Recent fleet upgrades implemented by some airline companies resulted to more fuel-efficient aircrafts.

UNU personnel should be aware of prioritised travelling, that is flying based on the needs and purposes that are in tune with the UNU’s mission. With this in mind, CO2 emissions from this source could be reduced to the lowest possible level and the goal of carbon neutrality through offsetting could be achieved.

To meet or not to meet?

According to UNEP’s Green Meeting Guide, “UN organizations are responsible for a huge number of meetings each year”, like this week’s COP15 that brings together thousands of negotiators and observers. To some extent, this is to be expected, considering the nature of programmes and activities conducted by the UN system and its mandate to promote international cooperation in order to solve pressing environmental, social and economic problems.

Solving these problems requires considerable tact and diplomacy, which may be challenging via new electronic forms of communication, rather than through traditional face-to-face meetings. Nevertheless, there are a lot of meetings where the face-to-face component may not be as crucial (especially after initial trust has been built or where training is the key component).

If we are going to move further forward in reducing our emissions, each meeting should be evaluated according to its potential outcomes, including networking opportunities, which play very important roles project-based activities. This evaluation, while challenging and complex, is a commitment worth making.

Acting with vision and motivation

In achieving a climate neutral UN, it will be essential for all agencies, funds and programmes to achieve net zero greenhouse gas emissions by reducing emissions and offsetting any remaining emissions.

Within the UN system, the United Nations Environment Programme was the first to achieve climate neutrality in January 2008. How was this possible?   In the first stage, emissions were calculated and a range of policies were considered. These included: (a) flexible working arrangements, encouraging staff to work from home; (b) use of renewable energy sources for UNEP facilities all over the world; (c) the construction of a new green office building in Nairobi to be ready in 2011; and (d) conducting all major meetings as green meetings to reduce both the carbon footprint and overall environmental impact.

In the second stage, the remaining emissions were counterbalanced through purchasing of offsets (see the UNEP Climate Neutral Strategy). A number of potential offsetting projects were selected through the standard procurement process. Preference was given to projects in Least Developed Countries, that address renewable energy, end-user energy efficiency or biomass/biogas adoption, and that contribute to poverty alleviation and environmental improvement as well as emissions reductions.

EcoSecurities Capital Ltd. was awarded the contract offering 11,508 certified projects in India (wind) and Nicaragua (energy/biomass) for a total cost of around US$225,800.

It is now clear to the vast majority of people on this globe that the climate is changing. The challenge is for all of us to change to mitigate our carbon footprint and to adapt to the changed climate. The UN has to set an example to motivate others to do likewise.

The Climate is Changing and So Are We by Tatiana Chernyavskaya and Carl Estrellan is licensed under a Creative Commons Attribution-NonCommercial-ShareAlike 3.0 Unported License.

Tatiana Chernyavskaya is currently a doctoral student at the Institute for Economic Geography and GISciences of the Vienna University of Economics and Business Administration (Wirtschaftsuniversität Wien), Austria. Her research area is related to the future of public-private partnerships in the innovation systems of BRICS economies where she applies foresight as a tool for future-oriented study. She recently completed an internship at the UNU Institute for Sustainability and Peace and hopes to continue her experience working with and exploring the research agenda of the UN.

Carl Renan Estrellan did his internship under the Global Change and Sustainability Programme at the United Nations University Institute of Sustainability and Peace (UNU-ISP) from August to October 2009. He is presently working on his post-graduate degree at the Department of International Development Engineering at the Tokyo Institute of Technology. His research interests include advanced oxidation processes for water treatment application, management and treatment of persistent organic pollutants (POPs), and climate change mitigation through carbon footprint reduction.