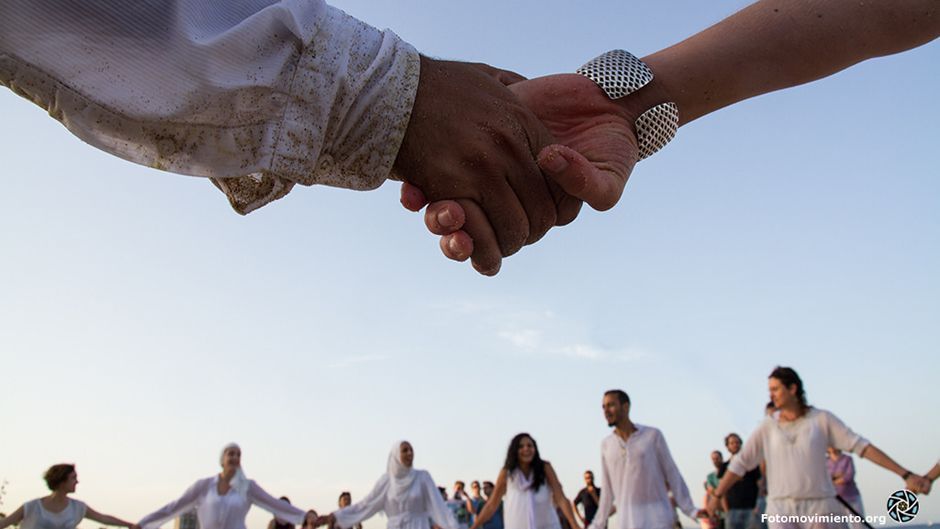 Barcelona was recently the site of a week-long performance of the first phase of an ambitious project that adopts theatre techniques in the journalistic recounting of the stories of those who do not have a voice. Organized by Teatro Di Nascosto, or Hidden Theatre, the stated aim of this ‘theatre reportage’ project is: “To tell the stories of… those who live war, oppression, big poverty, gender issues, or other problems that isolate them. To create less distance with the rest of the world, in many cases, with the Western world.”

Performed in locations in Spain, France and Italy, ‘The Dream Lottery’ was focused on human displacement in the Mediterranean Region, with the core of the performance emphasizing the dangerous sea crossings made by migrants. This is indeed a timely and important topic with over 1,500 people having died on the Mediterranean Sea in 2011 alone as they tried to make irregular border crossings, as noted in a 2013 report by the UN’s Special Rapporteur on the Human Rights of Migrants. An irregular border crossing is one that does not follow the usual regulatory norms of the State of entry or transit. This may be because a visa has been refused or is unavailable, for example. Others estimate that the numbers may be much higher.

Because this theatrical endeavour links directly to our areas of work at the United Nations University Institute on Globalization, Culture and Mobility (UNU-GCM) we were interested in observing this project and in speaking to the theatre company’s director of sixteen years, Annet Henneman, and to several of the actors. Indeed, an audio recording of a dialogue between the Director and Zaid Clor of UNU-GCM is now available.

The method employed by the company requires that all actors spend time living in a way that resembles, as closely as possible, the lives of the persons that they are representing. In the dialogue, Henneman reflects, for example, on what she has learned from living with women who wear Niqab about how to flirt with her eyes and about the physical difficulties experienced living in refugee camps across the Mediterranean Region.

They come from the sea

On the Friday evening performance (the show ran 19-25 June), invitees and anyone present on Barcelona’s Sant Sebastia Beach witnessed a group of actors dressed in white, the company’s usual ‘costume’ style, struggle to swim ashore. Having staged the capsizing of a boat carrying refugees, their arrival to shore was marked by cries of pain, weakness and relief to have reached land. As they gathered, shivering together, they shared moving accounts of individual migrant journeys. The harrowing stories of leaving everything behind to endure a life-challenging journey, which for many had resulted in a sense of lost identity in the new land, created a particularly moving performance.

The portrayal offered by the Hidden Theatre project contrasts with another approach that sees refugee disasters at sea as a problem that must be dealt with in order to manage irregular migration more effectively so as to reduce the numbers arriving. Instead, the production in Barcelona focused on the individual stories of the migrants themselves, those who have risked their lives crossing the same sea in which this theatre production took place (indeed, at the time of writing, the bodies of 30 asphyxiated persons have just been found on a further boat carrying more than 600 persons near the coast of Italy. In doing so it transported its audience, offering a look at the issue through the lens of the migrant. 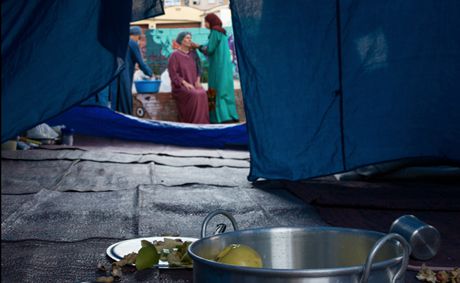 The method employed by the company requires that all actors spend time living in a way that resembles, as closely as possible, the lives of the persons that they are representing.

Members of the ‘Hidden Theatre’ group include refugees, heightening the piece’s authenticity. However, the question of whether one person’s devastation and pain should form the basis of an engaging production created for a general audience is a relevant one. At one point, as the video camera filmed, the photographers moved closer to an actor weeping for lost family, undoubtedly creating dramatic and engaging images for the screen. This raises the question of the appropriateness of such a mode of presenting, to a European audience that may have no direct connection with the issue, the experiences of those who may not have consented to having their stories portrayed. In some cases, the actors may be presenting elements from their personal stories. In others, the stories are of persons who have passed away, or who have been unable to join the company.

When asked about how the families who have lost loved ones would feel about actors portraying their stories, Assistant Director Ali Kareem recounted that, “at the beginning, refugees would be suspicious as to our goal. They think we are a typical NGO non-governmental organization who comes, takes pictures, and makes a research paper. However, when we live their life with them, they see we are different. Nearly everyone who we ask to work as actors with us agrees to do it, and if by chance they cannot work, they still allow us to use their story. There was only one case where refugees did not allow us but it was out of fear of retribution from the home country.”

On the Saturday, the performers invited people into a community space in the north of the city of Barcelona where they had erected a UNHCR (the UN refugee agency) tent to observe a form of funeral service. Dreams of people who had passed away in the Mediterranean were written on white pieces of paper with red fans on them and read out loud by the performers. The idea was that the possibility of dreaming is a lottery, as is the possibility of realizing those dreams. One spectator commented under his breath that it was not easy to tell when people were acting and when they were genuinely moved by the experience. This ambiguity, perhaps, is what Henneman and her team aimed to achieve.

Because of the increasing number of migrant tragedies, their journey is a subject of growing public and policy concern. This raises the question of whether theatre reportage of this kind can act as a way to influence policymakers. Kareem points out, “…we are not a typical NGO. We are just a theatre group”. However, maintaining this apolitical stance is tricky. Kareem further states, “we show people the reality of the suffering so people can make their own opinions and change the political situation if they wish”, and it is difficult to see how a company dealing with such themes can avoid being political to some extent. Throughout the interview, Ali Kareem presents the objective as simple: to give voice to the refugees and to show people what they go through in their daily lives. However, what happens after people see the performances is up to them.

As the only UNU institute in the Mediterranean, and the focal point for the UNU Migration Network, UNU-GCM has been engaging in questions relating to migration across the Mediterranean Sea within its wider areas of focus: ‘Globalization, Culture and Mobility’.

The depth of the challenges facing policymakers in the region was made clear by representatives from the Spanish government and the Catalan regional government at an event examining best practice in the receipt of refugees especially in a time of wider economic constraints affecting both immigrants and the host community.

The particular problems faced by young people on the move are portrayed in the recent film Corredors de Fons (Long Distance Runners) and, at a recent screening of the film at UNU-GCM, some young migrants in Barcelona explained their experience of local projects supporting their integration into the city, and of the experience of reaching the age at which they are no longer considered minors. The young people who came emphasized the scale of the difficulties they had faced, both in the journey to arrive, and once here, and said they would advise friends and family back home not to come.

The role of Barcelona, the host city of UNU-GCM, in the development of global strategies around migration was made clear in June’s first Mayoral Forum on Mobility, Migration and Development. This provided UNU-GCM with an opportunity to contribute specifically to the event’s examination of questions of city identities and the role of cities in the receipt of migrants, a matter that is growing in importance. The selection by Teatro Di Nascosto of Barcelona as a starting point for this recent project was apt and it will be interesting to see how it has been received at its other tour locations.

‘The Dream Lottery’ Tells the Stories of the Mediterranean Displaced by Claire Mc Govern, Zaid Clor and Tendayi Bloom is licensed under a Creative Commons Attribution-NonCommercial-ShareAlike 4.0 International License.

Claire Mc Govern is currently working as a Research Intern at the United Nations University Institute on Globalization, Culture and Mobility in Barcelona (UNU-GCM — coordinator of the UNU Migration Network). In addition to examining irregular migration policy, she is contributing to the UNU Migration Network by mapping its research findings and activities. She is also completing a Master’s degree in International Relations at the Institut Barcelona d’Estudis Internacionals (IBEI). Having previously worked in public relations she is interested in the development of migration policy and its shaping of public attitudes towards migrant issues.

Zaid Clor is currently doing an internship at the United Nations University Institute on Globalization, Culture and Mobility (UNU-GCM) in Barcelona (member of the UNU Migration Network). He is also a Master’s student at the Institut Barcelona d’Etudis Internacionals where he is obtaining a degree in international relations.