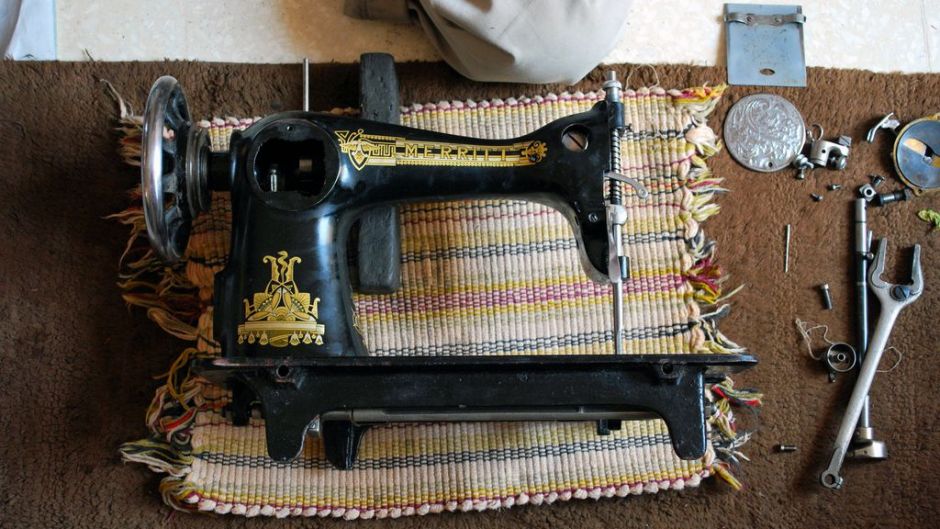 If there is one piece of electronic equipment in our house that every member of the family equally enjoys, it is our stereo. Listening to music and radio is one of our greatest pleasures. Bob and I purchased it shortly after we got married with gift money we’d received. We chose carefully, selecting a system that had been manufactured in this country — one we felt would last us for the next fifty years.

It lasted ten. Soon, little buttons stopped working, then a few speaker wires shorted out. This past year, we decided to get it fixed. We contacted the manufacturer.

“Those systems can’t be repaired any longer,” the company representative informed me. But lucky for Bob and me, the company, keen on seeming “green”, has a buy-back program for their old electronic products. They’d take my stereo away, and in exchange, they’d award me a $500 credit toward a new stereo system. I asked if the new ones were still manufactured here. The representative faltered, “Well, no….”

We decided to visit a nearby independently owned store that specialized in home entertainment systems. We explained we were looking for a stereo. A good one. There, we learned that stereos were a thing of the past. We were supposed to be listening to music through new wireless Bluetooth speakers that spoke directly to our computers, which would channel the radio stations and music over the internet. We should just throw out our old stereo and buy the new technology.

“But I don’t want to leave my computers and internet turned on while I’m listening to the radio. And I don’t want to have the internet in that side of my house.” Call me kooky, but I don’t like to be “connected” at all times. I also don’t want to be operating four pieces of electronic equipment — a router, a computer, a signal amplifier and a Bluetooth sound system — just so I can listen to some local folk music over the airwaves.

“What are you lady, Amish? Times are changing,” the salesman snapped at me.

Needless to say, he didn’t make the sale.

It was my mom who reminded us that we should call Mr. Kleinberger. For years, he and his wife had operated an electronics store on Main Street in Cobleskill. I remember going in there as a girl. He had two or three televisions in stock, maybe three or four radios. New products were not his mainstay. His real bread and butter was in repairing electronics — any electronics —  televisions, radios, VCRs, electric fence chargers. Eventually, the repair business fell away.

“Factories don’t authorize repair people anymore,” Mr. Kleinberger explained to me over the phone. “It used to be that we’d get trained by the manufacturers to repair and maintain their equipment. Nobody does that anymore. They [want to] sell you the next new thing. I can look at your stereo,” he said, “but I can’t make any promises.”

Bob and I figured we had nothing to lose. We brought it over to his farmhouse, where he directed us to leave it on his kitchen counter, next to a pile of fence chargers the local farmers had brought in.

A few weeks later, I called to see how he was progressing. “Nobody at the company will talk to me,” he complained. “I called the manufacturer twice to find out how I’m supposed to open the casing on this thing without breaking it, and they tell me they’re under strict orders not to release the information. But they’ll give you money for it if you [want to] buy a new system. Seems a waste, though, because if I could open this up, I’m pretty sure the repair would be just a few dollars’ worth of parts. A new system would cost you thousands.”

“Ya hear that?,” Mr. Kleinberger’s voice came over the line. “That’s your stereo. It’s a beautiful piece of machinery, that thing is. Every single part is a standard American part, made here and easily replaced.”

He went on to tell me his story of the repair. He’d made six different phone calls to the manufacturer, each time trying to get the same information: how to open the housing of the stereo without breaking it.

Each time, the answer was the same: “We don’t service those stereos anymore, and we don’t have that information. But we’d be happy to tell you about our buy-back program.”

Eventually, Mr. Kleinberger decided that, since he likes to talk, he’d wear them down with talking. “I told them my whole life story,” he said. He talked about his repair shop, about his wife, who has Alzheimer’s, who he takes care of; about how he fixes electronics out of his house; about the history of electronics repairs and manufacturing in this country, about his cats.

“I figured I’d make ’em crazy,” he told me. I could hear his smile, even through the receiver. “And maybe they’d transfer me to someone else. And they did. And I just kept doing it to the next person and the next person. But the first question I’d ask was ‘how long have you worked there?’ I finally found one guy, Josh, who’d worked there about as long as you had that stereo. That was the longest time of anyone I’d spoken with. I figured I had my man. He remembered when the stereos were manufactured here.”

Josh wasn’t authorized to release the pertinent information. But, like Mr. Kleinberger, he had a love for electronics. This love isn’t the narrow obsession with technology that drives so many folks to buy things they don’t need. Josh and Mr. Kleinberger had a mutual passion for the way things are made, the way the right parts make for a quality piece of equipment, the excitement of deciphering a problem and figuring out a repair. Josh held out as long as he could. He reminded Mr. Kleinberger he was under strict orders not to release the information. He told him about the buy-back offer. But with their mutual passion, the information Mr. Kleinberger needed eventually came out. And the stereo was repaired.

The polar bears are in danger because of the way we live, because of our abuses to the environment, because of our throwaway consumer culture. Josh and Mr. Kleinberger are unsung heroes in battling those exact problems. They are the lingering vestiges of our fix-it culture. And we need to bring people like that back into our communities.

While “buy-back” programs make a manufacturer appear earth-friendly in the consumer marketplace, they really only stimulate more consumption. A more civic and ecologically sound approach would be to reinstate trainings for independent repair businesses.

Locally-owned repair shops help to circulate money throughout the community, but also help residents lower their cost of living, in addition to reducing the volume of consumerism.

With people like that around, I think I could easily get another fifty years out of this stereo…maybe even more. Who knows? Sigh. It seems they just don’t make stereos, or people, like that anymore.

The Endangered Repairman by Shannon Hayes is licensed under a Creative Commons Attribution-NonCommercial-ShareAlike 3.0 Unported License.
Based on a work at http://www.yesmagazine.org/blogs/shannon-hayes/the-endangered-repairman.

Shannon Hayes is the author of Radical Homemakers: Reclaiming Domesticity from a Consumer Culture, The Grassfed Gourmet and The Farmer and the Grill. Her newest book is Long Way on a Little: An Earth Lover’s Companion for Enjoying Meat, Pinching Pennies and Living Deliciously. She is the host of Grassfedcooking.com and RadicalHomemakers.com. Shannon lives and works with her family on Sap Bush Hollow Farm in upstate New York.