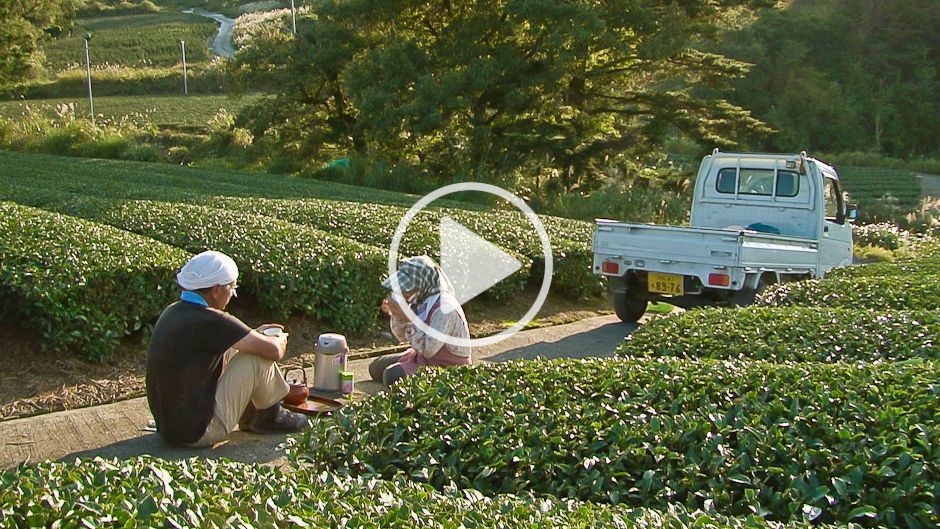 Throughout Japan there exist landscapes called satoyama in which people live and work in harmony with nature by combining traditional wisdom with scientific knowledge to practice agriculture in a manner that nurtures biodiversity. This article complements the video brief that looks at green tea produced in the village of Higashiyama, Kakegawa City, Shizuoka by using grassland resources to protect and augment soil, yielding a high quality product and giving haven to other plants, some of them important to Japanese culture.

Much of the agricultural industry operates in natural environments and thus, consequently, greatly impacts nature. However, while agriculture can sometimes be a destructive force, it can also be a protector by creating secondary ecosystems.

Two years ago, at the 10th Conference of the Parties to the Convention on Biological Diversity (COP 10), the Japanese government proposed the Satoyama Initiative as a model by which socio-economic activities, including agriculture, can be practiced sustainably by building a relationship between humans and nature. This is increasingly key today, as lifestyles, food consumption and agricultural production have changed over time and it is not uncommon for modern agricultural activities to cause biodiversity loss.

There are some farmers, however, whose efforts are preserving biodiversity. That is the case with those striving to grow high quality tea amid modernized tea cultivation in Shizuoka Prefecture, Japan. Here, the vista of tea fields stretching across mountain slopes is an iconic agricultural scene.

If you look around these tea fields, you will see semi-natural grasslands (chagusaba) maintained by the tea farmers. In summer, these chagusaba look like nothing more than grass. But as autumn arrives, you can see the cut grass tied in bunches and hung to dry. Farmers cut this grass around tea fields and use it to cover furrows from fall through winter. This practice helps fertilize the fields and is said to produce good quality tea, improving its taste and aroma.

Indeed, this type of kusakariba (grass-cutting area, or hay meadow commons) was formerly a common satoyama scene found throughout Japan. In the past, cut grass was used in farming villages as fertilizer for fields, as feed for cows and horses and as material for thatched roofs. In records from the 1880s, 30 percent of national land was semi-natural grassland, maintained and controlled by manual labour.

Periodically cutting the grass prevents large plants from growing and allows various plants to thrive, even some that would otherwise be disadvantaged in the battle for survival.

Intuitively, the act of cutting grass seems destructive to nature. However, we know that many organisms and species inhabit satoyama environments that are moderately influenced by humans. If the grass is left uncut, dominant plant species would grow rampantly, resulting in a decline in the number of plant types that can make the grasslands their habitat. Periodically cutting the grass prevents large plants from growing, letting sunshine reach the ground, which allows various plants to grow even if they are disadvantaged in the battle for survival. This is why satoyama grasslands are inhabited by many kinds of plants, creating rich biodiversity.

However, as agriculture and lifestyles modernized, satoyama practices and resources fell out of use and semi-natural grasslands became neglected. Gradually these grassland landscapes that were prevalent around Japan markedly decreased and suffered higher rates of species decline than other ecosystems.

Despite this decline, kusakariba have been kept alive and well in Shizuoka prefecture through tea cultivation. Chagusaba do not exist as broad grass fields, but are distributed like a mosaic between tea fields. We analyzed an aerial photo of one particular rural community and found that chagusaba accounted for about 70 percent of the tea field area.

Tea farmers have painstakingly cut and spread grass to improve the quality of their tea. This method of tea farming represents the farmer’s dedication to enhancing productivity amid modernized tea cultivation. These high standards of green tea production have continued to protect a grass environment that is disappearing from Japan. This conserves biodiversity and could be considered to be an excellent example of the Satoyama Initiative, which balances agricultural livelihood activities with biodiversity in a mutually beneficial relationship.

The semi-natural grassland landscape has held a familiar and nostalgic presence in Japan through the ages and many plants found in chagusaba have thrived in Japanese culture.

By cutting and spreading grass to improve the quality of their tea, farmers using this method have continued to protect an environment that is disappearing from Japan.

For example, “Manyoshu (Collection of Ten Thousand Leaves)”, which was compiled in the 8th century and is the oldest poetry anthology in the world, selects seven iconic wildflowers that bloom in the grasslands in autumn. Also, the plants that are referred to as “the seven herbs of autumn” all grow naturally in semi-natural grasslands. Japanese silver grass, which is a dominant species in the semi-natural grasslands, is placed in homes to mark the autumn harvest and in rice paddies as a New Year custom to pray for abundant crops.

When conducting the traditional tea ceremony, it is a hospitable gesture to adorn the room with seasonal flowers. These flowers are referred to as chabana, which literally means tea flowers. Interestingly, chabana often consist of flowers that grow naturally in semi-natural grasslands. Indeed, chagusaba conserves not only biodiversity, but also a part of tea ceremony culture.

What is the most important thing for conserving the biodiversity of semi-natural grasslands for generations to come? That would be for tea cultivation in Shizuoka to continue. For, if it declines, the rich biodiversity that it protects would also be lost. Growing delicious tea brings happiness to both people and living creatures. The tea of Shizuoka Prefecture is a treasure that should be passed on to future generations.

The Green Tea Ecosystem of Shizuoka by Hidehiro Inagaki and Yoshinobu Kusumoto is licensed under a Creative Commons Attribution-NonCommercial-ShareAlike 3.0 Unported License.

Dr. Hidehiro Inagaki is a Senior Researcher for the Plant Biotechnology Division of the Shizuoka Prefectural Research Institute of Agriculture and Forestry.

Dr. Yoshinobu Kusumoto is a senior researcher at Japan’s National Institute for Agro-Environmental Sciences. His academic speciality is plant ecology and landscape ecology. He has been working on clarifying the impact of farming activities on the biota and its diversity in agro-ecosystem. Currently, he is interested in biodiversity of semi-natural grasslands maintained by agricultural activities.