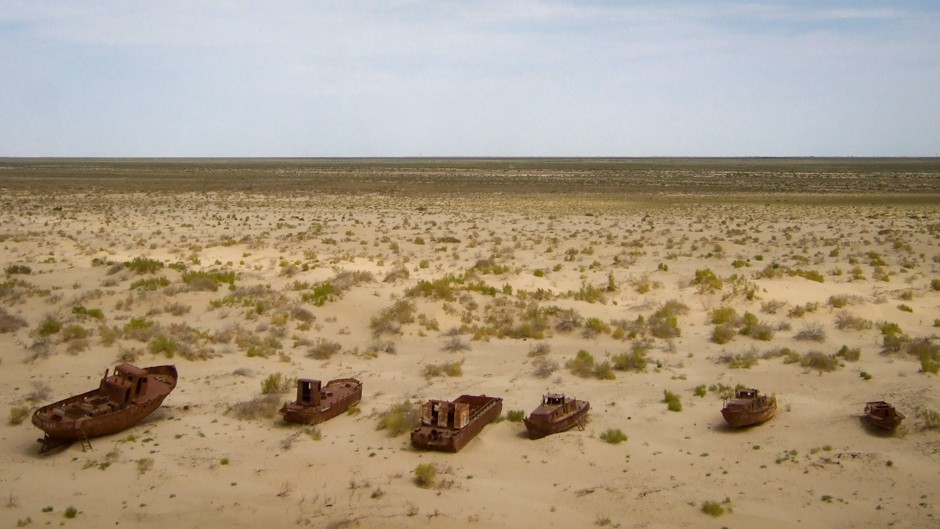 In the science-fiction film The Man Who Fell to Earth, David Bowie famously portrayed an alien from a planet running out of water. He left.

However, we — on planet earth — cannot.

Ironically, it was while researching and writing a sequel to that film — in which we imagined a futuristic earth itself running out of water — that my producer Si Litvinoff found the book Blue Gold: The Battle Against Corporate Theft of the World’s Water.

I was horrified to discover that what was happening on our planet now was worse than what we were dreaming up for science fiction.

I was horrified to discover that what was happening on our planet now was worse than what we were dreaming up for science fiction. In Bolivia, government snipers were shooting civilians to protect the interests of corporate investors, corrupt politicians sell public water for personal profit, giant bottled water plants suck entire regions dry, filmmakers have been murdered for trying to expose the truth, and Africa’s limited water supply is being stolen to grow roses for Europe.

Prior to directing Blue Gold: World Water Wars, I had never made a documentary. I was not a journalist or an activist. I was simply an independent filmmaker who had a desire to make films and a digital video camera won in Kevin Spacey’s short film contest.

I contacted the Blue Gold authors — Maude Barlow, chair of Canada’s largest public advocacy organization, and Tony Clarke, executive director and founder of the Polaris Institute — and was encouraged to discover that they were open to me investigating the reality of their 2002 book in the current world. I found a sponsor to fund the film and so proceeded to purchase equipment, tickets and hotel rooms with my credit cards.

The night before I was to set out shooting, the sponsor backed out. I was about to wake my wife and tell her that I must quit and return the goods. However, en route to our bedroom, I encountered our three-year old son Ethan in the hall, awakened from his sleep.

I fetched him a glass of water. I went to bed. I did not tell my wife about the financial situation. I awoke and set out traveling alone; a one-man crew on an adventure that changed me forever.

Straight to the source

Not long into the shoot, the authors learned about the financial risk I was taking and helped me find some grants to help ease the burden. Despite the financial risk, to this day, Blue Gold: World Water Wars has definitely been a ‘labor of love’.

While traveling, I quickly realized that when I wrote screenplays, I had only to research facts from a distance. However, to document these horrors on film, to report a real story, I had to go straight to the source.

That required bribing Mexican guards to shoot, for just a 20-minute window, raw sewage irrigating the farmlands. It required investigating the assassination of another documentary filmmaker who was trying to save Kenyan water from corporate rose plantations.

It required traveling deep into Africa, where women fetch water from miles away and white men are kidnapped almost as regularly. When I told an activist at the World Social Forum in Nairobi that I was planning to travel to the Kenyan interior alone (as I was self-funding the film, I had no crew) with a villager to film the water crisis there, I was warned that it is very common for any Westerner spotted to be kidnapped for ransom and that I should proceed with caution.

I had already experienced the ongoing need to bribe policemen who spotted a white man driving in the rural areas, but as we drove deeper in Kenya, I became fearful as the police checkpoints deteriorated into 15-year old boys with machine guns and a strip of barbed wire across the street. Plus, I was literally running out of money and couldn’t afford any more bribes, so I ducked at the next checkpoint to avoid being spotted.

My guides screamed at me to get up and not duck. Luckily the police did not require a bribe from me then, but I asked my guides why I shouldn’t duck. They explained that if the police saw me duck, they would assume I was being kidnapped by the drivers and would gun down everyone in the car, including me. The need to keep the public afraid of the police was greater than the need to save the life of a kidnap victim. It was situations like these that were sobering as to the many different ‘realities’ we live in on the globe and the need to adapt and proceed with caution.

Making this film also meant confronting some of the largest corporations and governments in the world. My regard for journalists grew with each encounter. Only recently, when respected CNN International journalist Christiane Amanpour used a clip of Blue Gold on her broadcast, did I start to consider myself, proudly, a member of the ‘family of journalists’.

I could not have brought the film to its current state without the guidance of my documentary mentor Mark Acbhar, whose film The Corporation influenced me greatly in this project. I approached Mark with a rough cut of the film and asked him where he found some of his footage from Bolivia’s water war.

He grew curious to see my film and liked what he saw enough to come on board as executive producer. It was thrilling to receive pages upon pages of editorial notes from him for each cut, most of which I agreed with completely. Strangely, we did not meet in person until the world premiere at the Vancouver International Film Festival where we won Audience Choice Best Environmental Film.

From reaction to action

Since then the reaction to the film has been overwhelming. With narrative films you try to entertain people by making them feel scared, happy, sad and excited. But with an important documentary like this, I experienced, for the first time, having an actual impact on the world situation; real people were moved to take real action to fight for their basic human right to clean drinking water.

Perhaps the most incredible story to date is that of Martin Robertson of Ideas in Motion. Martin approached me after a screening in Toronto, Canada and offered to help organize world-wide free screenings of Blue Gold. In the following four months, he organized 101 screenings in 37 countries. Only after this did I learn that Martin was fighting serious cancer, making his willingness and eagerness to use his time to spread the film that much more meaningful.

In each audience to which I screen the film, I encounter at least one person afterward who is so shocked and moved by the film that I can see they are forever changed, as I was in making the film. I believe that is the most rewarding experience any filmmaker can achieve. The film’s theatrical release in Tokyo, Japan was perhaps the most professionally rewarding, as I was interviewed by nineteen reporters in four days and saw firsthand how a country, not yet exposed to the film, received information about such a vital topic.

I believe that it is unfortunate we have a society that needs to see something to believe it. It is due to this limitation that I now realize the important role documentary filmmakers have in revealing controversial issues.

As fans grow on Facebook and with my newsletter, I find myself in the strange situation of going from a filmmaker looking to make his first feature film, to a water ‘expert’ whom people turn to for advice. Fans pushed me to include an Action Plan on my website where I’ve created ten pages of practical solutions to protecting water, all discussed in the film, such as forming community groups to fight local water supply, contacting representatives insisting your water remain a public right, organizing film screenings to spread the news, or altering your home water use to capture water into the ground instead of allowing it to drain away. There are also links to petitions, campaigns, and organizations people can turn to in order to aid this vital fight.

I’ve created a Water News section which that I update daily. And although I have been working on this issue since 2006, I am still shocked to learn of the horrific stories that for some reason bypass the mainstream news.

I believe that it is unfortunate we have a society that needs to see something to believe it. It is due to this limitation that I now realize the important role documentary filmmakers have in revealing controversial issues. My executive producer Mark Achbar made a wonderful film called Manufacturing Consent that explores the less-than-morally fair world of media news. It is shameful that the stories of Blue Gold have not received broad media attention prior to my film. If they had, I would not have felt so shocked by the news in the book, nor likely the need to make this film.

The reality is that for whatever reason, whether mainstream media is directly controlled or merely influenced by the needs of their corporate sponsors, independent documentary filmmakers have become the true journalists of our day.

But even with this rewarding reaction to my film, I still often ask myself why I took the risks I did to make this film? To enlighten the general public who know a limited amount about the issue? To make a change to the world for my son?

I think I made the film because the water crisis differs from all other news stories, because people need water to survive. If we run out of oil, our Black Gold, we may shift to solar or hydrogen energy, or perhaps less energy-intensive modes of production and transportation. With global warming, the world will be different, but we will still be here. I made this film because, while climate change is an issue of ‘how’ we live, the water crisis is an issue of ‘if’ we live.

I hope my film helps people see this while time is still on our side.

The Making Of World Water Wars by Sam Bozzo is licensed under a Creative Commons Attribution-NonCommercial-ShareAlike 3.0 Unported License.

Sam Bozzo produced, directed and edited Blue Gold: World Water Wars — his first feature documentary — which he shot in nearly a dozen countries. An Art Center College of Design alumnus, Sam has written, directed and edited three international award-winning short films that have been screened on the Sundance Channel and Showtime, the Toronto International Film Festival and Sundance Film Festival. He is also a Top 10 Project Greenlight Director.