The Role of Climate Protection in Reconciliation 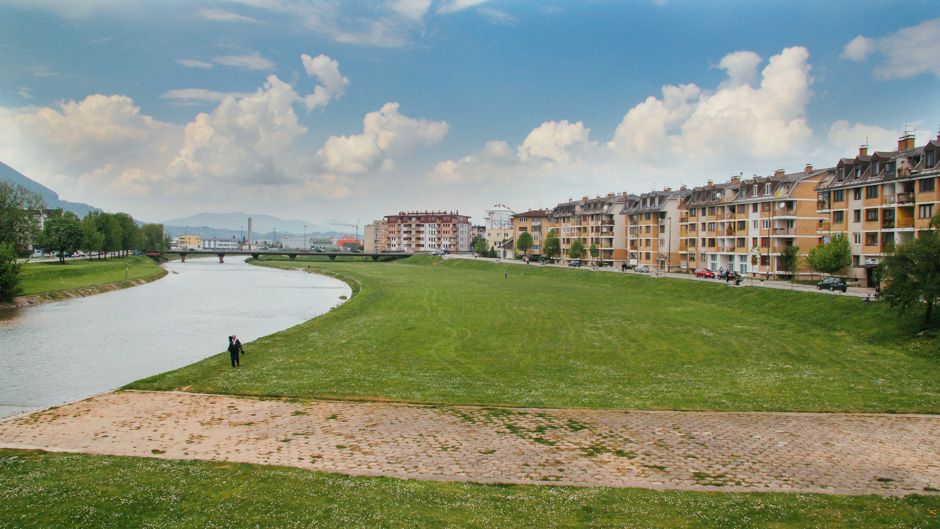 With its wind and rivers, Bosnia-Herzegovina has a lot of potential green energy on hand. Until now, politicians have shown little interest in tapping into those resources. But that could be about to change.

On first glance, Bosnia-Herzegovina is picturesque. Scored with sparkling blue rivers and lush green forests through which a gentle breeze often blows, the landscape is the perfect place for those seeking to indulge in nature at its best.

But on second glance, the image is not so serene. Between the brightly painted facades and tarred streets, bombed out houses serve as a chilling reminder of the war that raged there between 1992 and 1995, claiming more than 100,000 lives and drawing a deep divide through society.

Although the tanks and the guns are gone, the war lives on in people’s minds, posing economic and political challenges that prevent the country from exploring and exploiting its full potential.

River water is a perfect source of renewable energy, and Bosnia has plenty of it. The country does have a tradition of using the resource, and according to information from the Konrad-Adenauer Stiftung [foundation] (KAS), half the nation’s electricity is generated at hydropower plants.

Climate not a major consideration

But that has little to do with climate protection. To date, says KAS, the only ones to show an interest in harvesting Bosnia’s clean energy resources have been a couple of NGOs and scientists.

The Heinrich-Böll Stiftung is one of the foundations calling for a discussion on renewables in the Balkan state.

“There are environmental laws, but they are not enforced,” Alma Sukic of the Sarajevo office told Deutsche Welle.

So far the foundations’ efforts to highlight the energy potential has failed to generate any kind of response. Sabine Wölkner, head of the KAS Sarajevo branch, says it just isn’t a priority.

“Climate protection doesn’t play a major role in Bosnia-Herzegovina because the country has more fundamental problems to worry about,” she said.

Many people are still rebuilding their lives and trying to make ends meet, and the country remains divided. Although elections took place more than a year ago, the parties still haven’t managed to form a government.

“That proves that the country has reached a standstill,” Wölkner explained, adding that the distribution of ministerial posts is to blame for the inability to form a government.

The problem is not only who holds which portfolio, but more essentially, what the state should look like. The most important factor in society is which ethnic group someone belongs to — whether they are a Bosniak, a Serb or a Croat.

“Bosnia-Herzegovina is like a mini Yugoslavia,” Thorsten Gromes, a Bosnia expert at the Peace Research Institute Frankfurt, told Deutsche Welle.

There are dozens of political parties in Bosnia-Herzegovina, and between them, they represent every ethnic group. But they often seek to meet the interests of their followers rather than the entire state. Their visions can be deeply divergent, and they often end up blocking one another and preventing any real progress.

The muddled political situation coupled with high levels of unemployment — official sources claim 27 percent joblessness, but others say the figure is closer to the 40 percent mark — is off-putting for potential investors.

“At the moment, investors are pulling out of the country,” Wölkner said.

Left to its own devices

So for the time being, Bosnia-Herzegovina has to rely on itself and its own resources. One way is to tap into the country’s wealth of alternative energy sources.

Hydropower is an important export product, and the hydro-electric power plants in Rama and Trebinje that were destroyed during the war are now being rebuilt.

The country’s first wind park in Mesihovina is due to start generating power in 2012, too. The projects, which cost several million euros in loans from Germany’s KfW development bank, won’t only help to protect the environment and create jobs, but could even contribute to reducing ethnic tensions.

Still, Gromes says that won’t happen until there is a mental shift. Although he doesn’t elaborate on how to motivate a change in thinking, economic progress could be a significant first step.

Michaela Führer studied political science and now lives in Berlin and works as a freelance journalist.